Detail from the “Living at Risk” report. Click to watch a promo video. Courtesy of HRW

The report notes that governments will “never get to zero on HIV until they reach the trans community.”

“Florida fails to deliver basic HIV services to many transgender women, endangering their health and contributing to an uncontrolled HIV epidemic in the state.” That’s the conclusion of a report from the Human Rights Watch (HRW) stemming from an investigation and interviews with 125 transgender women in South Florida as well as government and law enforcement officials, medical providers and others.

Titled Living at Risk: Transgender Women, HIV, and Human Rights in South Florida, the 88-page report can be read and downloaded online here.

“Transgender women are struggling to find affordable health care, including HIV prevention and treatment, that respects their gender identity and where they feel safe,” said HRW senior health researcher Megan McLemore, the author of the report, in a summary of the findings.

“This is not only a matter of the right to health for trans women,” McLemore said in a related video. “But also a matter of public health for the entire community.” (You can watch the video above.)

“The federal and state government need to make sure that trans individuals are treated with respect when they come in for care,” added transgender activist Morgan Mayfaire in the video. “They’re never going to get to zero on HIV until they reach the trans community.”

Many trans women in Miami-Dade and Broward counties—which have the highest rates of new HIV infections in the country—told HRW that they were mistreated and even denied services from government-funded clinics. Many trans women, notably those of color, lack housing and live in extreme poverty. They fear violence and are at high risk of HIV. 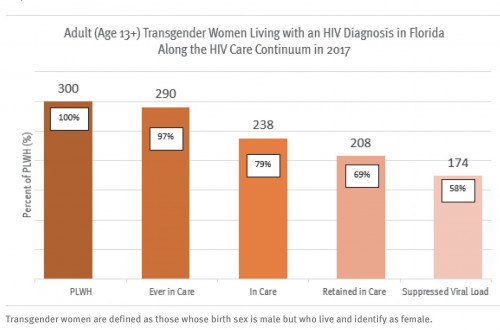 A section of the report examines the HIV treatment cascade of people living with diagnosed HIV in Florida in 2017 and compares it with adult trans women (over 13 years old) in the state and adult trans women in Miami-Dade County.

The report shows 300 adult transgender women living with an HIV diagnosis. Of those, 97 percent have ever been in care, 79 percent are in care, 69 percent are retained in care and 58 percent (174 women) maintain a suppressed viral load (see the graph above).

In Miami-Dade County, the report shows 53 adult trans women living with an HIV diagnosis. Of those, 94 percent have ever been in care, 83 percent are in care, 70 percent are retained in care and 66 percent (35 women) have a suppressed viral load.

The report arrives at a time when the federal government under Trump has been attacking transgender rights. For the latest on that, read “What If Federal Law Defines Sex so That Transgender People Don’t Exist?”