What happens when an HIV campaign in Indiana takes a very wrong turn? 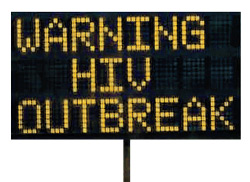 A digital sign along Interstate 65 in Indiana flashed three words: “Warning HIV Outbreak.” When Morénike Giwa Onaiwu saw it, she was filled with three feelings: “shock, nausea and rage.” “I am trying to raise my family free of HIV stigma and shame,” says Onaiwu, an advocate from Texas whose family is affected by HIV. “The sign flew in the face of everything that I believe in with regard to human dignity and nondiscrimination. I wanted it taken down immediately.” So she sent an image of the sign to her friends at Positive Women’s Network-USA, and with lightning speed, news of the offending campaign spread through social media. The sign was gone the next day. But how’d it get there in the first place? Turns out, there was a “miscommunication” at the Indiana State Department of Health, which is assisting with the HIV outbreak in Scott County. A proper educational campaign is slated to go up on highway signs soon, mostly aimed at truck drivers. Meanwhile, Onaiwu tells POZ she’s “ecstatic. I was floored by the support from all over. Like the African proverb says: When spiderwebs unite, they can tie up a lion.” Somebody should put that on a highway sign!