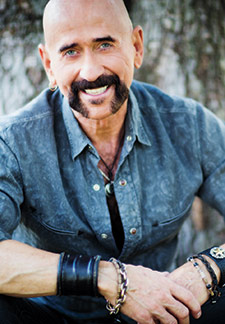 Knowing that Jimbeau Hinson’s new album follows his journey with HIV, you might expect the title song “Strong Medicine” to be about antiretrovirals. Wrong. “I wrote that in 1984,” recalls the bisexual country-western singer-songwriter. “The only medicine out there at the time was love—it’s still the strongest medicine they got.” The following year, 1985, Hinson, who has penned hits for the likes of the Oak Ridge Boys, tested positive. He and his wife Brenda retreated to their farm outside Nashville and kept his status a secret. That is, until Hinson went into a coma in 1996. He more than recovered: Today, his viral load is undetectable and Brenda remains negative.

Realizing that folks are still testing positive, he felt driven to do something about it. Hence the album, which is a collection of songs spanning his experiences—the fear, depression and loss—of surviving the epidemic. “The only way I could deal with it was to turn it into positives, into songs of fortitude,” he says. Indeed, Strong Medicine, with its melting pot of country, rock, gospel and R&B, will get you through whatever ails you.