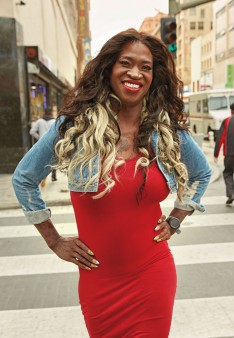 A survivor and trans women, Sabel Samone-Loreca is an advocates for issues she’s struggled with.

Sabel Samone-Loreca is a veteran in the fight against HIV/AIDS who focuses on the needs of transgender women and LGBT youth.

“As a trans woman, you’re put in these categories, and I think I killed the myth of a lot of these categories,” says Samone-Loreca, who started in HIV advocacy in 1995, six years after she tested HIV positive at an Atlanta clinic.

The Tampa native was living in San Francisco at the time, working for an agency called Californians Helping to Alleviate Medical Problems, where she helped set up one of its first support groups for HIV-positive trans women.

Soon after, Samone-Loreca started working as a case manager at Hospitality House, serving San Francisco’s homeless and poor; with each job, she became more outspoken.

Since then, she has experienced a lot of firsts as an advocate. Samone-Loreca became the first trans clinical social worker at the Children’s Hospital of Los Angeles in the early 2000s shortly after moving to LA, where she is still based. She was also one of the first trans women to serve on the city’s HIV commission and is the current cochair.

Another important distinction for her work is that she has struggled with almost all the issues she advocates for—whether it be medical services, housing support for LGBT youth or addiction treatment—which disproportionately affect people living with HIV.

“I’ve suffered through being an addict, being homeless, transitioning, being HIV positive, being diagnosed with bipolar disorder. My therapist is my best friend,” she laughs.

Samone-Loreca is also a recent survivor of rectal cancer and has also cured her coinfection with hepatitis C virus (HCV). In addition, her HIV viral load remains undetectable.

In her spare time, she models as her alter ego, Ms. Lady Mocha. She was also one of the main subjects in a recent National Geographic documentary on gentrification and gender.

This year, Samone-Loreca is excited about her gender confirmation surgery and her 50th birthday. “I’m looking forward to celebrating the second half of my life.”