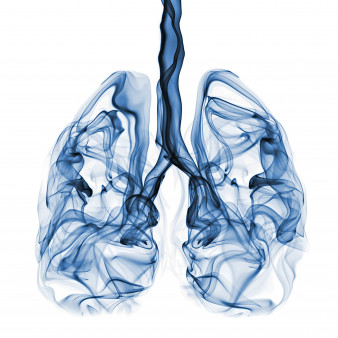 How Lungs Can Go Up in Smoke Faster

Smoking is tied to faster lung function decline in people with HIV.

People living with HIV experience faster decline in their lung function if they smoke, which may put them at higher risk for chronic obstructive pulmonary disease (COPD), an inflammatory lung disease that makes it hard to breathe.

Researchers reached this conclusion by analyzing data regarding 915 HIV-positive participants of the global START trial, which in 2015 proved that beginning HIV treatment with a CD4 count greater than 500 is preferable to delaying until CD4s drop to 350 or below.

These study members were followed for a median of 3.9 years. Twenty-seven percent were current smokers. The median age of both smokers and nonsmokers upon entering the study was 36 years old.

The investigators focused their analysis on signs associated with the development of COPD, specifically a test that assesses lung function to determine how much air an individual inhales and exhales and how fast he or she exhales.

“Although we couldn’t test the effects of stopping smoking in our START study,” Kunisaki continues, “data from non-HIV studies have shown that when people stop smoking, this rapid lung function loss returns to normal. Our study provides one more reason for HIV-positive smokers to consider seeking help to quit smoking: in order to optimize their lung health and age successfully.”