After tackling HIV in NYC, Demetre Daskalakis will be the director of the CDC’s Division of HIV/AIDS Prevention.

After overseeing numerous influential programs to prevent HIV and sexually transmitted infections in New York City, Demetre Daskalakis, MD, MPH, will train his sights on a bigger target: the national HIV epidemic. On December 21, he’ll begin his job as director of the Division of HIV/AIDS Prevention in the National Center for HIV/AIDS, Viral Hepatitis, STD, and TB Prevention. (The center’s title refers to sexually transmitted diseases, or infections, and tuberculosis; it is part of the Centers for Disease Control and Prevention, CDC.)

We would like to welcome Dr. Demetre Daskalakis as the new @CDC_HIVAIDS Director.

We are excited for him to lead this new chapter in CDC’s HIV prevention efforts! https://t.co/99g69lB0PA #CDCHIV #EHE #DHAPDirector pic.twitter.com/BZGXTTVbLd

“We are excited for him to bring [his] leadership and experience to CDC to advance meaningful research, guide surveillance and programs, support and implement effective policy, and ultimately prevent HIV infections and increase HIV-related health equity across the United States,” wrote Jonathan H. Mermin, MD, MPH, who heads the national prevention center, in a statement announcing Daskalakis’s appointment.

A self-described “queer health warrior,” Daskalakis was very public in New York City about his HIV advocacy, appearing at community events and even in a citywide “Bare It All” awareness campaign (pictured below). In August 2016, he became the first U.S. public health official to sign a consensus statement asserting that there is “negligible risk” of HIV transmission when a person living with the virus is taking HIV meds and has consistently maintained an undetectable viral load for at least six months. That statement became the basis for what’s today referred to as Undetectable Equals Untransmittable, or U=U. 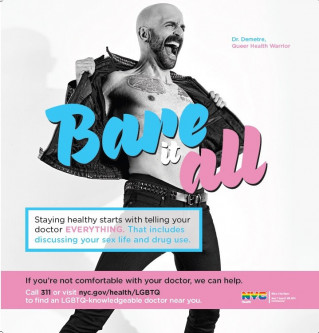 In recent years, new HIV cases in New York City have hit record lows. In 2019, while Daskalakis served as the city’s assistant commissioner of the Bureau of HIV/AIDS Prevention and Control, New York became the first U.S. Fast-Track City to meet the 90-90-90 HIV goals. This means that 90% of people with HIV know their status; 90% of people diagnosed with HIV are on treatment; and 90% of people on treatment have suppressed virus.

“Daskalakis is recognized nationally and internationally as an expert in HIV prevention and has focused much of his career on the treatment and prevention of HIV and other STIs as an activist physician with a focus on LGBTQIA+ communities,” the CDC statement reads. “He has also dedicated much of his time to improving the health of underserved communities and is passionate about addressing health equity.

“He is deeply committed to addressing stigma in HIV by promoting ‘status neutral’ service delivery and programming and by improving overall health and well-being of people with or at risk for HIV by addressing key social determinants of health. He has also shown tremendous dedication to ensuring that biomedical prevention options, like PrEP [pre-exposure prophylaxis to prevent HIV acquisition], are accessible and affordable to all who can benefit from them and that the importance of viral suppression as prevention is recognized by public health, health care, and the community at-large.”

“Dr. Demetre Daskalakis is a superhero for all of us,” said Guillermo Chacon, president of the Latino Commission on AIDS and founder of the Hispanic Health Network in an emailed statement. “We are convinced that his leadership, commitment, energy and convictions will accomplish amazing things….. His commitment to ending the HIV epidemic guided by health equity, structural stigma and erasing health disparities will serve as an unbreakable vision to design a world without AIDS.”