A “Milestone” in HIV Criminalization

Global experts agree: Science does not back HIV crime laws.

Twenty leading HIV researchers from across the globe released a consensus statement declaring that science does not support HIV criminalization. Not only does their evidence-based statement bolster the message behind the “Undetectable = Untransmittable” (“U=U”) campaign—that a person who has an undetectable viral load cannot transmit HIV—but it also addresses broader issues, such as basic transmission facts.

The consensus statement was published in the Journal of the International AIDS Society (IAS) along with a companion editorial titled “Addressing HIV Criminalization: Science Confronts Ignorance and Bias.” A related press conference was held in July during the 22nd International AIDS Conference (AIDS 2018) in Amsterdam.

“Today is a milestone,” writes POZ founder and Sero Project executive director Sean Strub in his POZ blog about the day of the conference. “It was an emotional, powerful and important event. I am looking forward to the dissemination of this statement, which will be a valuable resource for experts testifying in criminalization cases.”

“Simply put, HIV criminalization laws are ineffective, unwarranted and discriminatory,” says IAS president Linda-Gail Bekker, one of the coauthors of the statement. “In many cases, these misconceived laws exacerbate the spread of HIV by driving people living with and at risk of infection into hiding and away from treatment services.”

The expert consensus statement also notes that at least 68 countries have laws that specifically criminalize HIV nondisclosure, exposure or transmission and that 33 countries apply other criminal law provisions in similar cases. These unjust laws can get people with HIV arrested and convicted for nondisclosure even when no transmission has occurred, when the risk of transmission was extremely low and when no harm was intended.

“This is a long battle,” writes Strub, “and at times it is frustrating and feels like it is moving too slowly, particularly for those people living with HIV sitting in cages due to ignorance and stigma, but make no mistake: We are making progress.”

Trump’s America is no place for the 2020 International AIDS Conference (AIDS 2020), say more than 60 U.S. human rights groups and HIV/AIDS organizations. In March, the International AIDS Society (IAS), which oversees the AIDS conferences, announced that AIDS 2020 would take place July 6 to 10, 2020, in San Francisco, marking 30 years since the city first hosted the conference. (The events take place every two years; AIDS 2018 was held in Amsterdam in July.) Positive Women’s Network–USA spelled out several reasons to relocate the 2020 conference: “Detentions. Targeting sex workers and LGBTQ communities. Global Gag Rule. War on people who use drugs. Closed borders. The wall. Police brutality. Racist violence grounded in white supremacy. This is Trump’s U.S.A.” 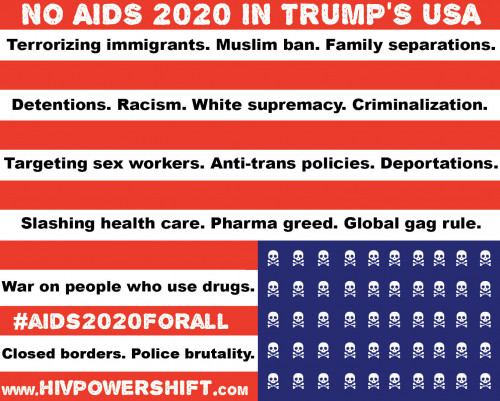