Two HIV lawsuits challenging Pentagon policy will go to trial next month. A third is on its way. 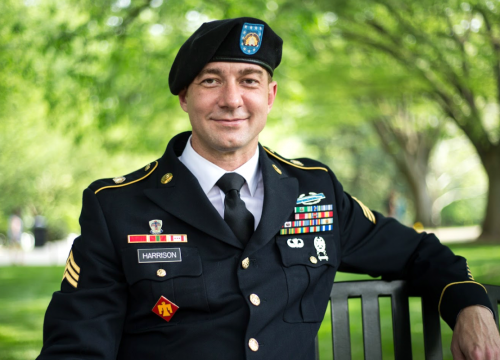 Sergeant Nick Harrison, the subject of one of the lawsuitsCourtesy of Lambda Legal

What’s more, Ray Mabus, secretary of the Navy from 2009 to 2017, had an opinion piece published in The Washington Post this week titled “Discriminating against HIV-positive military members is unproductive for our military.” Mabus wrote in part:

“According to the Pentagon, the Armed Services are preventing HIV-positive service members from deploying to a combat zone because of the alleged transmission risk they pose to others on the battlefield, the possibility they may not have access to their medications for a period of time and their inability to donate to the ‘walking blood bank.’ None of those reasons is grounded in science or military need nor justifies the current restrictions on deployment.

“Based on decades of medical breakthroughs and scientific research, we know that people living with HIV who are receiving proper treatment are not only as healthy as anyone else but also pose essentially no risk of transmission to others in any setting. As a result of excellent adherence to HIV medications in the military, nearly 100 percent of active-duty service members fall into this category.

“Getting medications to these members while deployed is not an issue. The military already does that for thousands of other service members every day. As I understand, a short HIV treatment interruption would not have any long-term negative effects on health—and any effects from longer interruptions could almost certainly be quickly reversed. If the military is unable to resupply a forward unit for an extended period of time, it faces much bigger problems regarding the health and safety of those unit members than any presented by a relatively slow-moving, chronic disease.

“And the effects on the supply of blood are negligible. All service members with HIV are given a direct order not to donate blood—so safety is not an issue—and the inability to donate will have no greater effect than donation restrictions placed on gay and bisexual men, people who have traveled to certain locations or those who have been recently tattooed. The current deployment restrictions lack scientific support, perpetuate HIV-related stigma and saddle these members with rejection and discrimination.”

For some backstory: In February 2018, Trump announced a new “Deploy or Get Out” policy. It orders the discharge of service members who cannot be deployed for 12 consecutive months, regardless of their fitness or ability to serve. Under current Pentagon policy, people with HIV may not join the military, but service members who contract HIV while in the military are considered nondeployable and therefore face discharge. In addition, they cannot be appointed as officers.

As POZ wrote in December 2018, two members of the U.S. Air Force were discharged days before Thanksgiving because they are living with HIV. They had tested positive the previous year and were taking meds; their doctors deemed them fit to deploy.

The resulting lawsuit, Roe and Voe v. Shanahan, was filed anonymously to protect their identities. The case was filed by Lambda Legal and OutServe-SLDN, which partnered with law firm Winston & Strawn. Lambda Legal is a nonprofit legal defense group that fights for HIV and LGBT communities; OutServe-SLDN is an association that serves LGBTQ veterans and military members.

In February 2019, a judge stopped the discharge of the two airmen, which Lambda Legal considered a “major victory.” The amicus briefs filed last week by military and medical experts urge the U.S. Court of Appeals for the Fourth Circuit to uphold the judge’s preliminary injunction halting the airmen’s discharges.

According to a Lambda Legal press release last week, one amicus brief is from the Navy’s Mabus and from former Secretary of the Army Eric Fanning; the second brief is signed by groups representing over 5,000 scientists and health care professionals; and the third is signed by HIV organizations such as AIDS United.

The related lawsuit involves Sergeant Nick Harrison, whose HIV status was used to deny him a position in the Judge Advocate General’s Corps (JAG), a branch of the military that deals with law and justice. For more about that case, Harrison v. Shanahan, click here.

According to Lambda Legal, a third lawsuit, Deese and Doe v. Shanahan, has been filed challenging Pentagon policy. This case involves two military academy graduates who weren’t allowed to commission as officers and start their military careers.

For a POZ interview with Peter Perkowski, the legal and policy director for OutServe-SLDN, read “Stronger Together.”