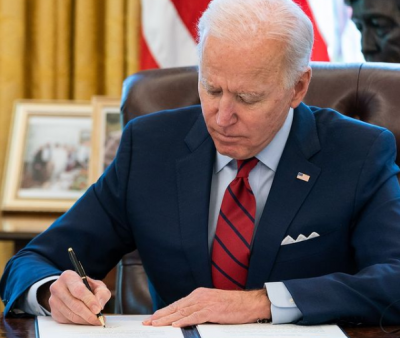 In January, Biden opened this enrollment period for the Affordable Care Act. Plus: Those with a health plan can change their coverage.

UPDATE: Here’s a friendly reminder that time is running out to enroll in health insurance through the Affordable Care Act (ACA, or Obamacare). The deadline for the special enrollment period is Sunday, August 15. If you already have a health plan through the federal Marketplace, you have until that deadline to change coverage. Learn more about these options on HealthCare.gov.

As the below January 29 article states, President Joe Biden signed an executive order opening the special enrollment period. The initial May 15 deadline was extended till August 15. For more details see “Four Ways the $1.9 Trillion COVID-19 Relief Plan Boosts Obamacare” and “Affordable Care Act’s Survival [in the Supreme Court] Praised as a ‘Victory for Patients.’”

Millions of Americans who lack health insurance have a chance to sign up for health care through the Affordable Care Act (ACA), often referred to as Obamacare. An executive order signed by President Joe Biden opens enrollment in the federal health exchange for three months, February 15 to May 15, and seeks ways to help strengthen and promote Medicaid and the ACA, such as protecting people with preexisting conditions.

The Trump administration had diminished the enrollment period to six weeks starting the beginning of each November. What’s more, as CNN reports, the administration drastically reduced enrollment assistance and failed to promote the insurance plans to the American people, many of whom could have qualified for federal assistance to pay for health coverage.

Biden’s directive aims to “undo the damage Trump has done,” Biden said in a speech before signing the executive order. “There’s nothing new that we’re doing here, other than restoring the Affordable Care Act and restoring the Medicaid to the way it was before Trump became president, which by fiat he changed—made more inaccessible, more expensive and more difficult for people to qualify for.”

As usual, most people can enroll via HealthCare.gov. Thirty-six states use the federal exchange on this site, but those that don’t are also expected to open their enrollment for special sign-up periods.

If ACA Marketplace enrollment is re-opened, more than 1/2 of the 4M #uninsured people who could get a free bronze plan live in TX, FL, NC or GA

Many health advocates and Democrats had urged Trump to expand enrollment because millions of Americans were losing jobs—and their health insurance—during the COVID-19 pandemic.

It’s not clear how many people Biden’s executive order will affect. People who experience a major life change, such as a job loss or divorce, have always had the option of signing up for Obamacare throughout the year (albeit within a small window). However, many potential enrollees did not know this. Nor did they know, according to a Vox explainer, about the existence of the federal marketplace for insurance and financial aid.

A recent report from the Kaiser Family Foundation found that nearly 15 million people are uninsured but eligible for a basic health plan (not including Medicaid). Of this group, 4 million could receive free plans through Obamacare, and another 5 million are eligible for help in paying for health care.

Biden’s directive does more than expand the enrollment period. The government will launch an ad blitz and outreach efforts to raise awareness. Biden has also directed officials to look for other ways the administration can strengthen health care and Medicaid without requiring Congress to pass laws. These include ensuring that people with preexisiting conditions are protected from health care discrimination and removing barriers (such as work requirements) to accessing Medicaid.

Executive orders likely cannot address the larger issues of health care access in the United States. Any such attempt to do so, Vox notes, will probably be challenged in the courts—which are now packed with Republican judges.

You can read the full executive order on WhiteHouse.gov; it reads in part:

“In March of 2020, the president declared a national emergency [related to COVID-19]. Although almost a year has passed, the emergency continues—over 5 million Americans have contracted the disease in January 2021, and thousands are dying every week. Over 30 million Americans remain uninsured, preventing many from obtaining necessary health services and treatment. Black, Latino and Native American persons are more likely to be uninsured, and communities of color have been especially hard hit by both the COVID-19 pandemic and the economic downturn. In light of the exceptional circumstances caused by the ongoing COVID-19 pandemic, the Secretary of Health and Human Services shall consider establishing a Special Enrollment Period for uninsured and under-insured Americans to seek coverage through the Federally Facilitated Marketplace.…”

Other directives announced at the same time focus on protecting women’s health and access to reproductive health care. To learn more, see this fact sheet from the Biden-Harris administration.

In related news, see “How Biden’s Executive Order of LGBTQ Equality Helps HIV Efforts” and “Health Issues Carried Weight on the Campaign Trail. What Could Biden Do in His First 100 Days?”