Laura Linney and Olympia Dukakis in the new “Tales of the City.” Click to watch the trailer. Courtesy of Netfilx

28 Barbary Lane has to be one of the most fabled addresses in all of America. Since the 1970s, the San Francisco locale has been home to the beloved characters in Armistead Maupin’s Tales of the City. Originally serialized in a daily newspaper, the stories eventually spanned nine books and several TV series. In June, Netflix returns us to 28 Barbary Lane, for a present-day continuation of Tales, which kicks off with a 90th birthday celebration for Anna Madrigal (Olympia Dukakis), the mother figure to all the residents.

Watch a trailer for the new series above, and take a behind-the-scenes look below:

“Every letter of LGBTQ is represented in somebody who lives at Barbary Lane,” Maupin tells POZ, noting that the new series is more racially and ethnically diverse. HIV also continues its groundbreaking presence in Tales thanks to long-term survivor Michael Tolliver (Looking’s Murray Bartlett), who is joined by Mary Ann and her ex-husband Brian (Laura Linney and Paul Gross) and their now-grown daughter, Shawna (Ellen Page).

The 2017 memoir Logical Family and the documentary The Untold Tales of Armistead Maupin offer insight on Tales and its author. Maupin, who is HIV negative, has never shied away from the virus. His husband, Christopher Turner, who is nearly 30 years his junior, is living with HIV. Maupin talks about this and more in our Q&A, edited here for clarity and length. How are you and your husband, Chris, doing?

We’re great. More in love than we’ve ever been, after 15 years. His health is good, and, except for some neuropathy in my feet because of diabetes, I’m a happy camper. I’m very proud of my husband. He did a Facebook post the other day, calling someone to task for asking if he was clean [meaning free of sexually transmitted infections and HIV]. He got more responses than anything I’ve ever had on my Facebook page because he struck close to what people with HIV still endure. There’s still a lot of work to be done and still the same solution: Tell the truth and get on with life.

You started writing Tales before HIV struck. What was your first encounter with the epidemic, and at what point did you decide to put it in your stories?

My friend Daniel Katz died in St. Vincent’s Hospital in New York, one of the first people who contracted Pneumocystis pneumonia [PCP, a common cause of death before modern treatment]. He was my little brother in my logical family, and we were all traumatized. So I realized I had no choice but to let AIDS be part of the narrative. I was resolved to kill off a popular character in Tales to make other [characters] feel the pinch. And when that happened, there were plenty of gay guys that said, “How dare you spoil our light morning entertainment with your political agenda?” Jon Fielding [a character in Tales] was the first AIDS fatality in fiction anywhere. That was in ’83. A couple of novels came out the next year, but this was the first time that anybody talked about the epidemic. [Editor’s note: for a glimpse of Maupin and Katz at the 1978 launch of Tale of the City, at the Marina Laundromat, click here.]

When Tales first ended in 1989, Michael was living with HIV. You’ve said you didn’t want to continue the tradition of killing the gay character at the end. You didn’t expect Michael to make it?

I assumed that everyone who was HIV positive wasn’t going to make it. It was still a death sentence in 1989. And I didn’t want to live through his death. Fortunately, that bought me time so that I could come back to Michael in Michael Tolliver Lives [the 2007 novel] and talk about what that new life was about. 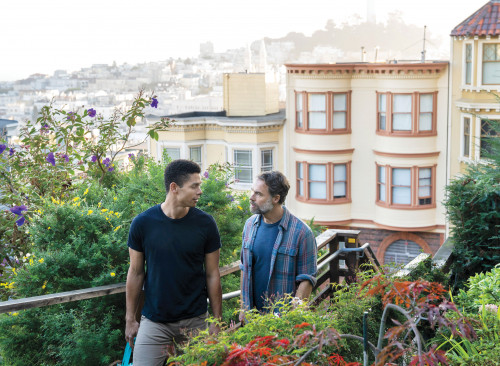 Charlie Barnett as Ben and Murray Bartlett as MichaelCourtesy of Netfilx

And looking hotter than ever! [Laughs]

Thank you for putting him in a serodiscordant relationship—when one person has HIV and the other doesn’t—so we can explore that. Plus, he’s got a sexy young boyfriend, Ben [played by Charlie Barnett, recently in Russian Doll]. Gee, I wonder where you got the inspiration for a hot younger partner.

Michael’s so friendly. I was surprised when he says he feels a lot of rage.

Well, he buried it. People with HIV learn to be good little boys about it all and feel like it’s somehow beneath them to express anger that their lives were taken away. Even if they’re living, they were robbed of their carefree lives. 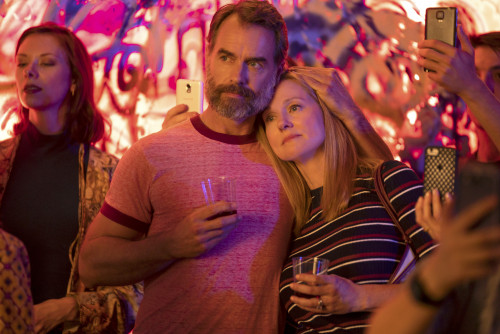 The Netflix series explores intergenerational queer issues. Like the intense scene when a bunch of older gay men basically lecture Ben, saying if it hadn’t been for their sacrifices, he wouldn’t have so much freedom. Meanwhile, Ben is Black and knows all about discrimination. But he’s a bit rude to them too. Where do you stand on that lecture?

I really give credit to the writing team on that scene. You hurt for Ben, and you hurt for Michael, and you understand the point of [actor] Stephen Spinella [playing an older gay man]. That scene is especially ironic because [Spinella’s character] says, “What makes you think you can understand this? Because you watched Angels in America?” And he was in Angels in America! [Laughs] I don’t admire those [older] guys, but they’re expressing a feeling that many of us of that generation have. Imagine what it was like to live in that era. I try not to be that way myself. I say I don’t want to be the old queen who says, “In my day, we had to walk 10 miles in the snow just to suck a cock.” [Laughs]

And unlike the stereotype that gay men don’t use condoms today, Tales finds Michael conflicted about ditching them. How’d you arrive at that detail?

He’s a man of conscience. He had survived for years, thinking that that’s what he had to do. And he couldn’t reverse it. I think the idea was Lauren Morelli’s, our showrunner. We had 10 queers in the writers’ room, so we got every possible angle. From an old lesbian—forgive me Pat Resnick, but that’s what you are, and we admire you for it—and trans people. We pretty much covered the spectrum, and that’s where a lot of the storylines came from: People sharing their experiences. The notion that a trans man can be in a relationship [with a woman] and then because of the testosterone [he starts taking] he can develop a taste for men—that’s fascinating to me.

That storyline in Tales is so captivating.

And it’s another way to examine everything from the point of view of humanity and how people feel. You’re sympathetic both with Jake [the transgender man played by non-binary trans actor Garcia] and with Margo [his girlfriend, May Hong] in that situation. 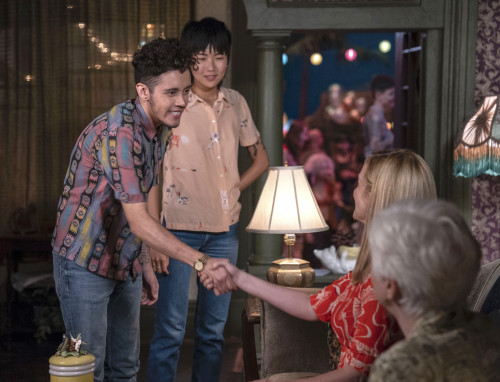 From left: Garcia, May Hong, Laura Linney and Olympia DukakisCourtesy of Netflix

Let’s pivot to your personal life. You hooked up with Rock Hudson back in the day and caused a controversy when you publicly outed him as gay toward the end of his life, when he had AIDS. Do people still bring that up?

Oh yeah. And they still get it all wrong. You have to look at the context of the times when I made the decision to tell [journalist] Randy Shilts that Rock Hudson was gay. We were suffering and thought we needed to out the movie stars at that point, even the very nice ones. As far as Rock was concerned, I knew that he was going to be eaten alive by the tabloid press. Everyone knew he was queer. I put myself out there [to also] say he is a decent guy and this is not going to be a scandal if I can help it.

Did you hear from him toward the end?

He sent his biographer my way. I was [worried that] he might have misunderstood [my intentions]. He misunderstood so many things. He was a Republican for God’s sake and had Nancy Reagan over to his house. He worked against his better interests all the time. But his biographer said, “Rock said you were the first person to talk to.” That’s when I realized that he got it. And that was wonderful because I was having dreams about him thinking I had somehow betrayed him. It was one of the diciest times in my life. I knew I had done the right thing, but I did not like it when I would walk down Castro Street and the old queen that runs the flower shop would cluck his tongue at me. [Laughs]

You’ve said that going to the bathhouses in the 1970s helped you shed your conservatism. How so?

It liberated me. It works that way if you’ve never had sex with anyone until you’re 25 and suddenly you can lie in the arms of another man in a joyful way. The touch of another person can make you heal.

You also quipped that you remained HIV negative in the early epidemic by being boring in bed.

I wasn’t much of a bottom in those days. [Laughs] I define that as boring now. I think versatility should be the aim if you want to enjoy your sexual experience.

The Tales series has often addressed political issues of the day. Does the current occupant of the White House play a role in the new series?

Well, some of the symptoms of Trump world are addressed, but we didn’t want to give him one more moment of discussion and publicity. 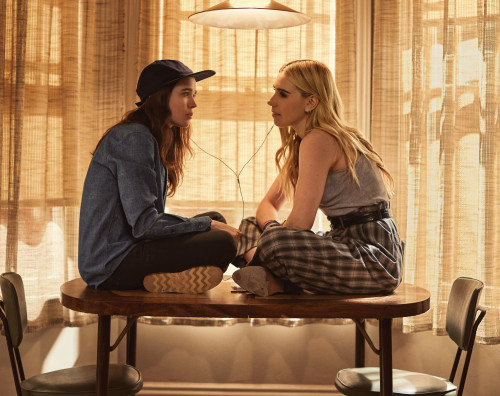 You’ve witnessed an amazing stretch of LGBT history, from Stonewall to marriage equality, from the AIDS crisis to today’s treatments, but lots of people feel we’re in dark times right now. I know this is a broad question, but do you see things as getting better or worse?

It is pretty huge—you could write whole essays on that question. I’m joyful that things have gotten better. I’m furious that it took so goddamned long. That’s the short version.

I personally feel that from the long view of history, LGBT people are one of the few groups in America that can actually record the progress that has been made. We can feel it. And I’m happy about that. Mostly, I still attribute it to the fact that they [the general public] know who we are now. That was the hardest battle back in the ’70s, just telling people to come out of the closet and drop your shame. Harvey Milk [the first openly gay elected official in California, who was assassinated in 1978], that’s all he ever argued.

Will we get more Tales from Netflix?

That’s my hope. It all depends on the algorithms. They can tell within a short time how many people are watching.

Are you writing more in the series?

I’m working on a book that would return to Mona Ramsey at her manor house in England. She’s such a kick-ass gal.

When Tales debuted on PBS in 1993, it caused a nationwide scandal. Do you think the new Tales will shock people?

I never try to shock. I just try to tell the truth about life. There’ll always be somebody horrified by the natural depiction of queer sexuality. You watch! I think of one of the things Mrs. Madrigal says in one of the recent books: “You don’t have to keep up, dear, you just have to keep open.” 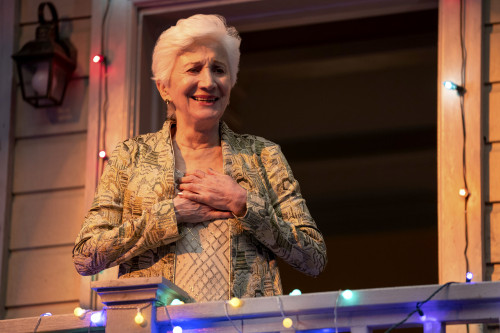