The new numbers are encouraging, but Black and Latino people continue to be disproportionately affected by HIV.

New data from the Centers for Disease Control and Prevention (CDC) show that HIV incidence, or new infections, fell by 8% between 2015 and 2019, largely thanks to declines among young gay and bisexual men. Increased use of pre-exposure prophylaxis (PrEP) and prompt antiretroviral treatment have contributed to the progress.

“The new data from the CDC are encouraging. It shows that we’re going in the right direction towards ending HIV,” Carl Schmid, executive director of the HIV+Hepatitis Policy Institute, told POZ. "If we invest more in HIV prevention, including PrEP, and can get more people living with HIV on antiretroviral medications that suppress their virus, we can decrease the number of new infections. I am pleased that the Biden administration is continuing to prioritize ending HIV. With continued support and funding from Congress, we should continue to see further declines in HIV in the U.S." 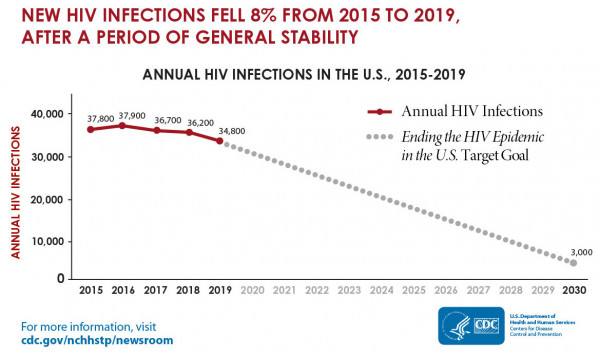 According to the CDC’s new National HIV Surveillance System report, Diagnoses of HIV Infection in the United States and Dependent Areas 2019, a total of 36,801 people were diagnosed with HIV in 2019, a 9% drop from 2015. New diagnoses decreased among men and women; gay and bi men and heterosexuals; Black, white, Asian and multiracial people; and people ages 13 to 24, 35 to 44 and 45 to 54.

However, transgender men and women and Native Americans saw an increase in new diagnoses. Numbers remained stable for Latinos and for people ages 25 to 35 and those over 55. While diagnoses were stable overall among people who inject drugs, white injection drug users saw a notable increase, which the CDC attributes to concentrated HIV outbreaks associated with the opioid crisis.

But not everyone who contracts HIV is diagnosed promptly. Some people diagnosed in 2019 acquired the virus earlier, while some who contracted HIV that year have not yet been diagnosed.

According to a supplemental report, Estimated HIV Incidence and Prevalence in the United States, 2015–2019, the CDC estimates that the actual number of new infections in 2019 was 34,800, an 8% decline. At the end of the year, an estimated 1.2 million people ages 13 or older were living with HIV, including about 13% who were not aware of their status.

The drop was largely driven by declines among young gay and bi men. Between 2015 and 2019, the number of new infections among men who have sex with men fell by 9% overall, but there was a 33% decrease among those ages 13 to 24.

Although declines in HIV incidence were seen across racial and ethnic groups, Black and Latino people continue to be disproportionately affected. African Americans are eight times more likely and Latinos are four times more likely to acquire HIV compared with white people. And people in the South account for more than half of all new infections.

The reported progress is attributable in part to increased PrEP use and rapid initiation of antiretroviral therapy by people newly diagnosed with HIV. People on effective treatment who maintain an undetectable viral load do not transmit HIV to their sexual partners, a concept known as treatment as prevention, or Undetectable Equals Untransmittable (U=U).

A second supplemental report, Monitoring Selected National HIV Prevention and Care Objectives By Using HIV Surveillance Data United States and 6 Dependent Areas, 2019, shows that nearly 285,000 people had a prescription for PrEP in 2019. This represents 23% of eligible individuals, about 3% more than the 2015 proportion. Just over 80% of people diagnosed with HIV were linked to care within one month, and 66% had an undetectable viral load in 2019, an improvement over 2015. 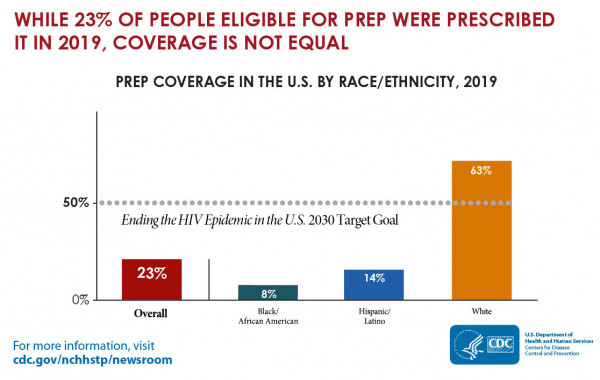 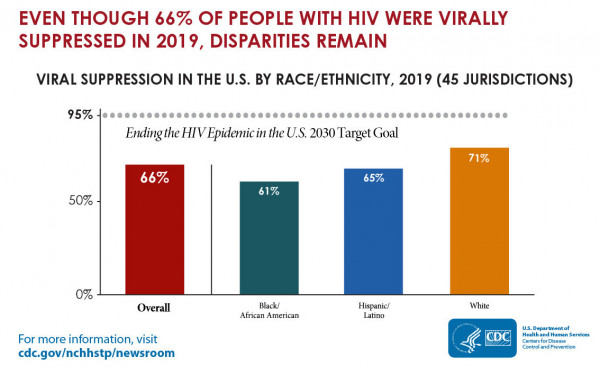 Although the new data are encouraging, the CDC stressed that addressing these disparities will be crucial to reaching the federal government’s goal of reducing new infections by 90% by 2030, as set forth in the Ending the HIV Epidemic in the U.S. plan. The agency estimates that in order to do so, 50% of eligible people will need to be on PrEP and 95% of diagnosed people will need to be rapidly linked to care and achieve viral suppression.

“We have made extraordinary progress against HIV over 40 years, but profound disparities by race and ethnicity have emerged that persist today,” Demetre Daskalakis, MD, MPH, director of the CDC’s Division of HIV/AIDS Prevention told POZ. "Through the Ending the HIV Epidemic in the U.S. initiative to enhance our core HIV work, we have set a course to end the HIV epidemic over the next decade. To reach the finish line, we need to accelerate efforts to provide equitable access to HIV prevention and care for everyone."

The new reports do not yet reflect the impact of the COVID-19 pandemic, which has curtailed HIV testing, prevention and care both locally and nationwide. The effects may be especially detrimental in the South. A possible silver lining is that the pandemic has accelerated the development and rollout of innovative strategies for continuing services, such as telemedicine and self-testing, which could help reach the populations hardest hit byHIV.