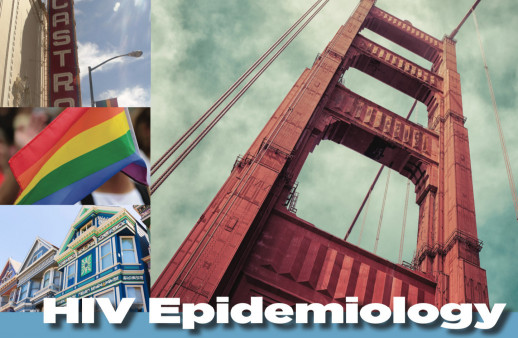 Some groups, however, including Black and Latino men and homeless people, are not faring as well as others.

The number of HIV diagnoses in San Francisco has fallen below 200 for the first time, and most indicators of care have improved, according to the city’s latest HIV Epidemiology Annual Report. But the new findings also reveal some striking disparities according to race and ethnicity and housing status. 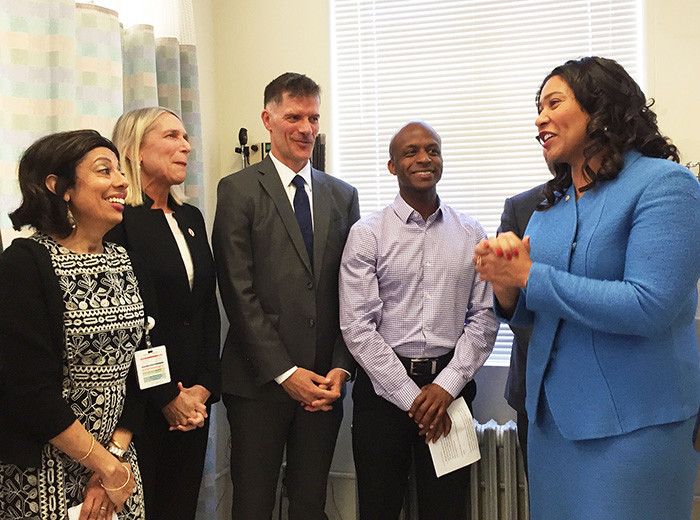 “We are pleased but not satisfied,” Diane Havlir, MD, chief of the HIV/AIDS Division at Zuckerberg San Francisco General Hospital and cofounder of the city’s Getting to Zero Consortium said at a September 10 press briefing at Ward 86, the nation’s first dedicated HIV/AIDS clinic.

“We are pleased that we broke the 200 barrier. In San Francisco, over the last five years, new HIV diagnoses have gone down by 50%, while in the United States it’s been completely flat,” she continued. “But we are not satisfied, because we had nearly 200 new infections, and it’s a preventable disease. We’re not satisfied, because of these disparities.”

The report shows that there were 197 new HIV diagnoses in 2018, a decline of 13% from 227 new cases in 2017. Because of the city’s high testing rate, HIV incidence—or total new infections—is thought to be about the same as the number of new diagnoses. 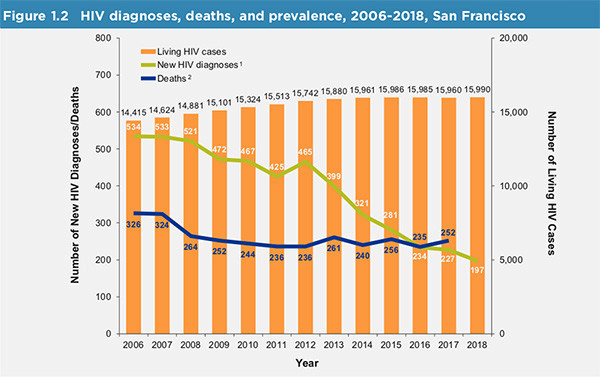 For the first time ever, the number and proportion of new HIV diagnoses among Latinos exceeded those among whites. Looking at all genders combined, Latinos accounted for 38% of new cases, whites for 29%, African Americans for 21% and Asians/Pacific Islanders for 8%.

These figures do not reflect the corresponding proportions of these groups in the city’s population, which stand at 15%, 53%, 6% and 36%, respectively, according to the U.S. Census. Nationwide, Blacks have the highest diagnosis rate, at 43%, while making up about 13% of the total population, according to the Centers for Disease Control and Prevention (CDC). 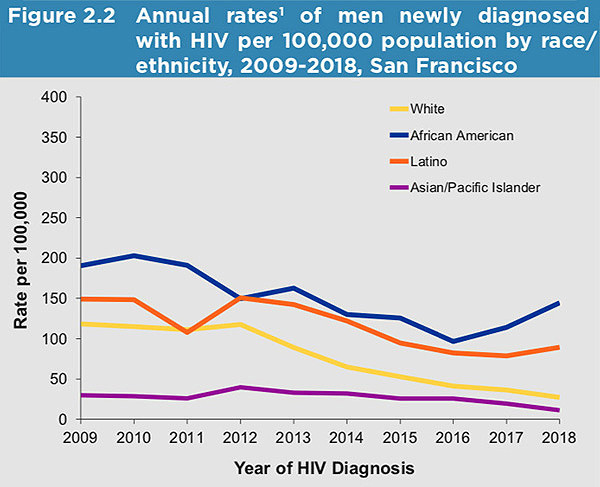 Cisgender (non-trans) women accounted for 9%, transgender women for 3% and trans men for 1% of new cases in San Francisco. Here, too, the diagnosis rate is much higher for African-American women, while Latinas and white women have similar rates (35, 8 and 2 new cases per 100,000, respectively). Among the trans women with HIV, 36% were Latina and 31% were Black. In the United States as a whole, women account for 19% of new diagnoses; comparable data are not available for trans people. No infants or children under 13 have been diagnosed with HIV in San Francisco since 2005.

The number and proportion of new HIV diagnoses among people who inject drugs (PWID) continues to rise. PWID accounted for 14% of all new cases, with another 10% attributed to men who both inject drugs and have sex with men (nationwide, these proportions are 6% and 3%, respectively). Heterosexuals who do not report injection drug use accounted for just 5% of new diagnoses in San Francisco, compared with 24% nationwide.

The number of new diagnoses among homeless people rose from 29 in 2017 to 40 in 2018, raising their proportion of all new cases from 10% to 20%. Public health officials stressed that getting a handle on HIV among people living on the streets is key to further progress.

“Think about where we were 25 years ago; think of where we started. Who would have thought we’re getting below 200?” said San Francisco Department of Health (SFDPH) director Grant Colfax, MD. “But we still have much more work to do. We must be bold, and we must be innovative, both with HIV and with mental health and with substance use and with addressing the intersection between health and homelessness.”

San Francisco is a leader among U.S. cities when it comes to providing timely HIV testing, care and treatment. In 2018, an estimated 94% of people living with HIV had been tested and knew their status.

A large and growing proportion of people are being diagnosed with CD4 counts above 500, meaning they do not yet have substantial immune system damage. Over a quarter (28%) are now diagnosed at the earliest stage of infection. However, 19% of people were diagnosed late, defined as developing AIDS within three months of HIV diagnosis. Cisgender women, trans women, Asians/Pacific Islanders, heterosexuals and homeless people were more likely to be diagnosed late.

Among newly diagnosed people overall, 91% were linked to care within a month, 64% were retained in care for three to nine months and 78% achieved viral suppression within a year. Of those diagnosed in 2017, 86% were on antiretroviral therapy.

But the overall numbers hide some important disparities. African Americans and Latinos had lower levels of viral suppression compared with whites (68%, 70% and 76%, respectively). Cisgender women and trans women were less likely to have undetectable HIV (66% and 68%, respectively) than men (74%). Among people who inject drugs, the rate was 65%. But the greatest disparity involved among homeless people, only 33% of whom had an undetectable viral load.

Looking at all people living with HIV in San Francisco—both diagnosed and undiagnosed—the report estimates that 70% maintained viral suppression in 2017. Nationwide, 62% have undetectable virus, according to the CDC.

The latest findings show that San Francisco is making progress toward achieving the goals of its Getting to Zero initiative: zero new infections, zero deaths due to HIV/AIDS and zero stigma against people living with HIV.

This progress is attributable to a combination of factors, including the city’s large and politically powerful LGBT population, the presence of leading HIV/AIDS research institutions and the early implementation of the “San Francisco model” of interconnected community-based HIV services.

In 2010, San Francisco became the first U.S. city to recommend universal antiretroviral therapy for everyone diagnosed with HIV, regardless of CD4 cell count—well before the federal government’s treatment guidelines followed suit. In 2013, the city piloted its RAPID antiretroviral therapy program, which aims to get people started on treatment the same day they’re diagnosed.

Together, these initiatives have led to a growing proportion of people with viral suppression. Because people with undetectable viral load do not transmit HIV, this has contributed to a lower risk of acquiring the virus at the community level.

In addition, San Francisco’s gay community—in particular white gay men in their 30s and 40s—were early adopters of pre-exposure prophylaxis (PrEP). The city was one of two U.S. sites for the pivotal iPrEx trial, the first major study to demonstrate the efficacy of PrEP, as well as early PrEP demonstration projects. SFDPH and community organizations have promoted PrEP use and provide navigators to help people gain access and pay for it.

Thus, San Francisco’s successes can be seen more as a proof of concept of what can be achieved under near-optimal conditions. But it is widely recognized that some populations and other jurisdictions face greater challenges—and everyone agrees that more needs to be done.

“We have to double down on these gaps we’re seeing,” Havlir said. "We need to listen. We need to deploy new innovative approaches with tools that we have, like PrEP, and with upcoming tools like long-acting injectable therapy that could make it a lot easier for some of our populations."

Finally, San Francisco’s rapid gentrification and skyrocketing housing costs have driven some of the groups most at risk for HIV out of the city, as demonstrated by the low and declining proportion of African Americans. The picture is quite different across the bay in Oakland, where 24% of the population is Black and HIV prevention and care services are not as widely available or as well funded.

“We need to focus on reaching people where they are,” said Hyman Scott, MD, a SFDPH researcher and clinician at Ward 86. “There are no hard-to-reach populations but rather hard-to-deliver services.”