It’s Official: NYC Will Have an AIDS Memorial Park

Until recently, it was unclear what the park would be called. AIDS advocates petitioned city council and parks committee members and other representatives to ensure that the space would be named after New Yorkers who lost their lives to AIDS.

Mayor Bill de Blasio “has long been a champion of people living with HIV/AIDS and the name he has conferred on this new city park and future home to the New York City AIDS Memorial is a visible reminder that underscores the critical impact of the AIDS epidemic in New York City’s history and supports expanded efforts to combat its continued persistence today,” reads a statement on the official website for the AIDS memorial, now being constructed.

“The New York City AIDS Memorial Park at St. Vincent’s Triangle stands at the crossroads of the richly historical West Village,” said New York City parks commissioner Mitchell Silver in a statement. “Here, we honor and celebrate St. Vincent’s Hospital’s more than 150 years of service to our city, as well as the countless New Yorkers impacted by AIDS: those we have lost, those who live with HIV/AIDS, and those who continue to battle against fear and ignorance.”

A section of the park has already opened, and the AIDS memorial is scheduled to open later this summer.

For more on the memorial, read Trenton Straube’s July 2015 blog post “Love Ya, Walt Whitman, but Does ‘Leaves of Grass’ Belong on an AIDS Memorial?” 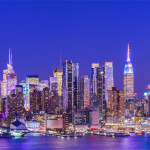