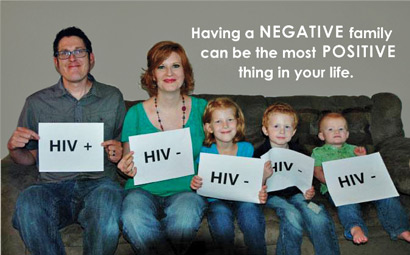 Born with HIV in 1981, Andrew Pulsipher started meds when he was just 8 years old, after losing both parents to the virus. He was raised by an aunt and uncle in a supportive environment, and today he’s happily married in Queen Creek, Arizona, and the proud papa of three HIV-negative kids (the first conceived through a fertility treatment, the other two the old-fashioned way). Despite the strong family ties, though, he was never very open about his HIV. “That was always the lifestyle I led,” he recalls. “It never occurred to me to tell everyone.”

Earlier this year, he decided to be more public, as a way to help other people with the virus know they could live a long life and even have a family. But how to disclose? “I tried to think of a fun way to say I’m HIV positive and explain it,” he says. “I thought, maybe a photo on Facebook with a few facts about me—not a long story—so I decided to take that angle and see what happens.”

The results? “The local TV news from Phoenix called and said the story had like 8,000 shares. I was like, ‘It does?’ And they said, ‘We want to come to your house and interview you—today!’ I said, ‘I have three small children and need to clean up!’”

The Associated Press ran the piece, as did the Huffington Post and BuzzFeed. People are still coming across the story and leaving him messages. “People always ask, ‘How do you find love?’ And I say, ‘You don’t have to disclose right away. Get to know the person.’ I waited five or six months to tell my wife. She understood—but she was very into science, so that helped.”

Pulsipher hopes to parlay his sudden fame into an actual job. “I think I’d be a benefit to kids living with HIV,” he says. “I was there. I get it.” Meanwhile, he’s enjoying the spotlight. “People say all these wonderful things about me,” he says, “but I joke that I haven’t been part of the HIV movement for 34 years, even though I’ve had it for that long. It’s taken me a while.” He’s certainly making up for lost time.