In a recent small trial, researchers have been unable to detect viable virus in the tissues of two monkeys that received the treatment.

Researchers appeared to have succeeded in using the CRISPR-Cas9 method to edit SIV, HIV’s simian cousin, out of the cells of a pair of infected monkeys, aidsmap reports. Because both monkeys were euthanized, it is not possible to determine whether the treatment cured them. A future study will seek to edit SIV out of monkeys and then follow the animals over time after antiretroviral (ARV) treatment is discontinued to see whether their virus rebounds.

Tricia H. Burdo, PhD, an associate professor of neuroscience at the Lewis Katz School of Medicine at Temple University in Philadelphia, presented findings from the study at the 2019 Conference on Retroviruses and Opportunistic Infections (CROI) in Seattle. 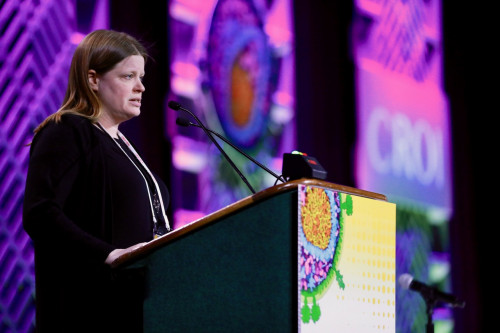 The scientists used a common cold virus as a vector to deliver CRISPR-Cas9 to infected cells in rhesus macaque monkeys. This system was designed to target three separate sections of the SIV genome, thus acting as a buffer against the development of viral resistance. Two such edits ideally removed almost all of the SIV genome, while a third removed about 10 percent of the viral DNA and replaced it with a genetic sequence that served as an indicator of successful gene editing.

Burdo and her colleagues infected three monkeys with SIV and started them on ARV treatment 12 weeks later. After another eight weeks, they drew immune cells from the animals and conducted the gene-editing treatment on those cells in a laboratory setting. These results were promising.

Consequently, four weeks after the researchers took the immune cells from the monkeys, they provided the gene-editing treatment to two of them. About 100 trillion of the viral vectors were transfused into each animal over a 100-minute period.

Three weeks later, the three animals were euthanized, and the investigators studied blood and tissue samples. They were not able to culture any virus from cells taken from the two animals that received the treatment. Additionally, the genetic indicator of the excision of viral DNA turned up in 42 percent of the tissue samples from one animal and 76 percent of samples from another.

The investigators are still looking for evidence of the full removal of the viral genome in various tissue samples and have found promising results so far. And although they detected viral DNA in some tissues, this virus could be nonviable, considering the findings from their attempts to culture the virus from cells.