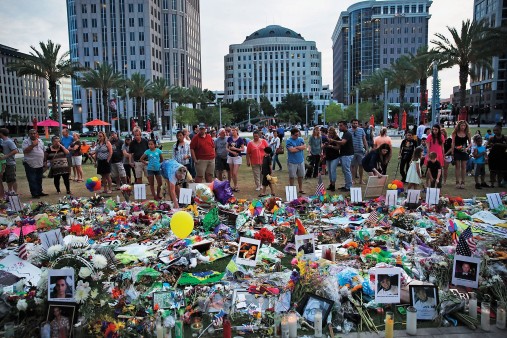 In an opinion piece titled “‘Sanctuary’ After Pulse,” Cecilia Aldarondo—a native of Orlando and the director of HIV documentary Memories of a Penitent Heart—reflects on the sanctuary of gay clubs. Here is an edited excerpt.

I went to my first gay club in Gainesville, Florida, in 1999. I was 19—a virgin who had left Orlando right after high school. When I escaped to college, I only made it to Gainesville—a two-hour drive—and the University of Florida didn’t feel far enough.

I enrolled in Gay and Lesbian Literature and made my first gay friend. Through him, I ended up at the gay bar: the University Club, or UC, as everyone called it. In retrospect, it wasn’t that edgy. But for a Puerto Rican girl from the suburbs, it felt like another planet.

What if someone had burst into UC and ripped holes into it while I danced some night, as happened at the gay club Pulse in Orlando, killing 49 people, mostly young gay Latinos?

I’ve never been to Pulse. Yet I feel like I can understand what it meant to the people who worked and partied there. Club life can be fleeting, but gay clubs like Pulse are also places of refuge. When everywhere feels wrong—home, school, church—where do you go?

I’ve spent the past four years thinking about these questions while making Memories of a Penitent Heart. As he lay dying of AIDS-related illness in 1987, my uncle Miguel was pressured by his devout Roman Catholic mother to repent his homosexuality. A generation later, I decided to make a film about it.

In the process, I discovered that when he was a teenager in Puerto Rico, Miguel found his own Pulse in San Juan, called Bachelor. It lasted a little over a decade; in the ’90s, the owners were lost to AIDS, and a neighboring businessman mowed the club down, turning Bachelor into a parking lot.

I’ve tracked down a lot of people who clocked time at Bachelor. They all say there was nothing like it. Bachelor was a place that obliterated boundaries—rich and poor, gay and straight, white and black, and all the in-betweens.

In April, Memories of a Penitent Heart screened in Orlando at the Florida Film Festival. In June, the shooting happened. I had just seen so many friends. As the reality sank in, I realized I could have had friends inside Pulse. Thankfully, they were all safe.

Every city has its Pulse, its UC, its Bachelor. These are supposed to be spaces of sanctuary. Traditionally, sanctuary was a religious word, meaning a sacred space in a church for fugitives to flee persecution. A sanctuary, above all, offered refuge. Violence was totally prohibited. But for many queer people, sanctuary in the religious sense has never existed.

Yes, some churches have been the exception—but over and over again throughout history, queer people have fled their churches and sought sanctuary elsewhere. For many, clubs like Pulse have provided that sanctuary. And on June 12, a homophobe violated this sacred—yes, sacred—space.

Everyone deserves sanctuary: LGBT people, Muslims, asylum seekers, immigrants, people of color, indeed, anyone living vulnerable lives. And I refuse to let other hate crimes be perpetuated on the backs of this one. This is where we are headed, if we aren’t careful. To me, the only way from here is unshakeable solidarity and resistance, not despite our differences, but because of them.

My wish? That they reopen Pulse and name it Sanctuary.