As news of the so-called London Patient spread across the globe, AIDS organizations, community leaders and regular folks living with HIV took to social media to share their thoughts about the possibility of a second person having been cured of his HIV. (For background on the case, read “A 2nd Man’s HIV Is in Long-Term Remission, but Is He Cured?”)

What did people have to say? Let’s give the first word to the first man cured of HIV, Timothy Ray Brown, aka “the Berlin Patient.”

“Since my mission has been to have more siblings in my extremely small family of people cured of HIV I was delighted to learn this news!” he posted on Facebook. “The London Patient has chosen to remain anonymous for now. I support this choice because I wanted my privacy for at least a year and a half after it was announced that the Berlin Patient has a long term remission from HIV, ie cure..I will do what I can to support him in whatever decision he makes.

“This proves once again that HIV can be cured.. it is up to our brilliant medical scientists working in this field to develop cures which can be more easily accessible and include more women and people of color.” 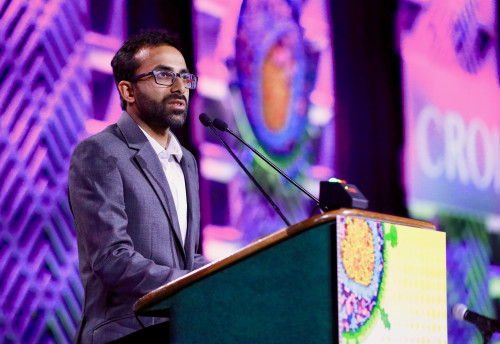 Ravindra K. Gupta of University College London cautioned everyone about being too quick to use the term cured for the London Patient. Gupta prefers remission for this case, at least for the next two or three years, and his opinion matters. Gupta is the researcher who presented the data regarding the London Patient at the 2019 Conference on Retroviruses and Opportunistic Infections (CROI) in Seattle. The case study findings, which will be published in the journal Nature, were reported in the media ahead of an embargoed date.

During a CROI press conference, Gupta was asked about news outlets already proclaiming the London Patient “cured.” His response: “That’s not good journalism, I guess.”

Offering more behind-the-scenes information on the London Patient, amfAR, The Foundation for AIDS Research posted a press release and an explainer about the breakthrough.

“Although it’s too early to say for sure, we’re certainly hopeful that the London patient is cured,” said Rowena Johnston, PhD, amfAR vice president and director of research in a press release. “amfAR’s investments in innovative and forward-thinking projects like IciStem give us the opportunity to learn which factors will form the scientific basis of a cure for HIV.”

IciStem refers to amfAR’s international collection of researchers studying patients who have HIV and cancer and who have undergone stem cell transplants. The London Patient was part of the IciStem research consortium.

Another member of the IciStem group—a man nicknamed “the Düsseldorf Patient”—is also doing well after a transplant, amfAR reports. He has been off treatment since November and thus far shows no sign of viral rebound.

“While we fully understand that stem cell transplantation is not a practical way of curing large numbers of people, we can learn a tremendous amount from these cases” said amfAR chief executive officer Kevin Robert Frost. “And we can apply that new knowledge to the development of strategies aimed at a more widely applicable cure.”

In a video posted about the London Patient, Frost stresses, “For the nearly 40 million people living with HIV today, amfAR is not giving up on them. And amfAR’s work will not be finished until there’s a cure that works for everyone.”

“Although [the London Patient case] is not a viable large-scale strategy for a cure, it does represent a critical moment in the search for an HIV cure,” said IAS president Anton Pozniak. “These new findings reaffirm our belief that there exists a proof of concept that HIV is curable. The hope is that this will eventually lead to a safe, cost-effective and easy strategy to achieve these results using gene technology or antibody techniques.”

In 2012, IAS launched the Towards an HIV Cure initiative to bolster research into an affordable cure. Mark Dybul, cochair of the initiative, also commented in the IAS statement about the London Patient. “Despite the great success of [antiretrovirals], there remains a high need for a cure for HIV, especially in low-income settings,” he said. “This [London] case is as important as it is exciting. There is still more to discover.”

On Twitter, @basic_scientist, a PhD student at Emory University in Atlanta, addressed our ambivalence regarding the practicality of this type of cure research. “The optimist in me always trumps the rational in moments like these. We have another one ladies and gentlemen! How unbelievably amazing!”

me: “But this isn’t a practical soluti...”
also me: “HUSH SELF!”
The optimist in me always trumps the rational in moments like these. We have another one ladies and gentlemen! How unbelievably amazing! #LondonPatient #HIV #hivcure https://t.co/7GbBfXW5B7

President Trump had no time for nuance in his celebratory tweet: “Such great news for so many. Tremendous progress being made!”

“HIV Is Cured In 2nd Patient, Doctors Report.” @nytimes Such great news for so many. Tremendous progress being made!

The political climate and the president being what they are in 2019, numerous followers blasted Trump for his record on HIV. But one doctor took the opportunity to engage in a more productive discussion: “Hopefully, Trump’s excitement about the London patient … will encourage him to invest our country more in scientific and medical research. Gene editing of immune cells for HIV therapy is a promising area of study,” tweeted Eugene Gu, MD, in a series of posts. “Much of this research working towards a practical cure for HIV will depend on human fetal tissue research and embryonic stem cell research, which is how many advancements in this area of study have already been made.… So it would be great news if Trump and the Republicans who have been so virulently anti-science can now get on board with this.”

Hopefully, Trump’s excitement about the London patient who is the second patient in history to be cured of HIV, will encourage him to invest our country more in scientific and medical research. Gene editing of immune cells for HIV therapy is a promising area of study.

Much of this research working towards a practical cure for HIV will depend on human fetal tissue research and embryonic stem cell research, which is how many advancements in this area of study have already been made.

So it would be great news if Trump and the Republicans who have been so virulently anti-science can now get on board with this. More funding in these areas would help a great deal as well as less Congressional harassment of the scientists and physicians working on those projects.

On Facebook, Scott Kramer, a psychotherapist and counselor who specializes in HIV issues, sounded a more personal and introspective note. “I try not to get too excited when I see these types of articles.… It makes me think of other people living with HIV and also those who have lost others to HIV. What does this mean to them? … So while it certainly is thrilling, it comes with very mixed emotions for some.… Bottom line: This is great news, but keep in touch with your loved ones and ask how they are doing.”

Another bottom line, this one expressed by Health GAP and worth underscoring: “Until there’s a scalable strategy for a cure, action is needed to ensure ALL people w/HIV have access to life-saving treatment!”

Like many others, we are inspired to learn that the person known as #LondonPatient is in HIV remission. We also acknowledge that until there’s a scalable strategy for a cure, action is needed to ensure ALL people w/HIV have access to life-saving treatment! https://t.co/wp1cb0qoWt