Detail of a 1989 photograph by Robert Giard

In this reminiscence about his friend, the founder of POZ shares personal insights on the late author and activist.

Larry’s indomitable spirit was driven by a passionate and unlimited love for his community. He was parent, mentor, teacher and scold all in one. When he spoke of “my people,” some accused him of being messianic, but others knew just what he meant, because we are indeed “his” people, just as he is one of our people.

Even as the HIV epidemic and AIDS activism evolved, there was comfort in knowing Larry was our lodestar, always watching even when he wasn’t as active a participant. In recent years, Larry’s activist voice and influence waned, but his death still feels like an unmooring, as if we’ve been cut loose to find our own way.

Larry was an erudite tribal leader who expected and demanded much from those of us who were frightened, confused and unsure what we needed to do to survive and respond to the epidemic. He knew that every person, no matter their resources or station in life, had something important and powerful to contribute.

That started with opening our mouths and being heard, which is what Larry demanded, especially of those he felt were in positions of privilege that could be leveraged for the benefit of all. The “spawn of Larry Kramer”—which is what you could call many of the early activists at ACT UP, the group he helped launch—are mostly gay white men.

It was our privilege that drove our outrage and anger. For many of us, the realization that the government and much of society were willing to let us die was a shock, a cold slap in the face. Unlike many others, we had never experienced such governmental neglect or indifference to our suffering.

Larry helped transform our rage at this realization into advocacy. Sometimes it was advocacy akin to a temper tantrum thrown by children being told no for the first time. In time, for many of us, it was advocacy that became sophisticated, intersectional and focused beyond our self-interested quest for survival and committed to structural reform. 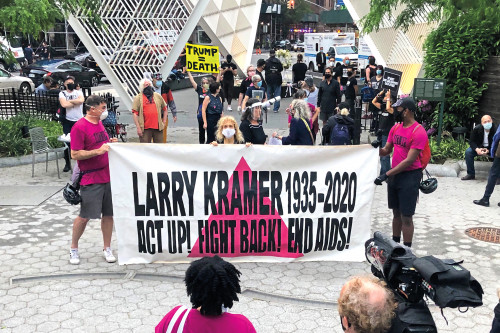 When I got a text message notifying me of Larry’s death, I was on a call with state officials concerning the COVID-19 pandemic, participating in my role as mayor of Milford, Pennsylvania.

As I read the text, it immediately struck me that without having been so influenced by Larry, I might not be as active and engaged in the COVID-19 pandemic as I have been. The AIDS epidemic hijacked many lives; Larry helped some of those lives get redirected into activism that, for some, turned into a life’s work.

The bellicose, belligerent and sometimes abusive public Larry Kramer persona was, to an extent, a character, something he stepped into strategically when he felt it useful.

That never matched the gentle, caring and sentimental private persona that wanted to make sure his friends were well-loved, happy and employed—and showing up for demonstrations.

When David Drake, Tom Viola and I were working on producing David’s one-man show in the early ’90s and wanted to title it The Night Larry Kramer Kissed Me, one prospective investor in the project wouldn’t commit. He wanted a note from Larry promising that he would not sue us for using his name.

I took Larry to see a workshop performance of the play at Dixon Place (at the time founder Ellie Kovan’s living room!). Larry got emotional and had tears several times throughout the performance, reaching over to tightly grip my hand at the most intense moments.

After David took his bows, the room emptied. Larry and I sat there; I was waiting for him to say something. “I’m not going to give you permission to use my name,” he said. I was surprised. Then he said, “But I won’t sue you!” He explained that he didn’t want anyone to think he had somehow facilitated the production.

He was proud of the play and years later commented on how the publicity surrounding it had contributed to his growing fame. When a billboard at the corner of Seventh Avenue and Greenwich Street, facing the traffic coming downtown on Seventh, became available, the owner of the Perry Street Theatre—where the show was performed—urged me to lease it. But the cost ($5,500) was enormous and beyond our advertising budget.

The theater owner at the time was a proud lesbian and a great supporter of the play, so she offered to pay for half the cost if we noted on the billboard that the theater was “Lesbian Owned and Operated.” This was during a period when Larry’s gay male–centric activism was under fire from women and others in ACT UP. When I showed him the artwork, he said, “I guess she doesn’t go to ACT UP meetings!” 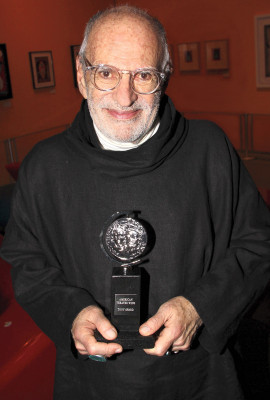 Larry saw himself and the broader LGBT community that emerged in the late 1970s and early ’80s in historical terms, as being the most recent and more public incarnation of a queer culture that had always existed. He was elated when he would discover factoids that supported his hypotheses about famous historical figures being gay.

In the spring of 1999, while speaking in Madison, Wisconsin, Larry went public with his belief that Abraham Lincoln had a long-term sexual relationship with Joshua Speed, Lincoln’s “roommate” for a time when he lived in Springfield, Illinois.

Larry even claimed he had seen Speed’s previously unknown diary and letters confirming the affair, supposedly found under floorboards in the house where they lived and now in a private collection. Larry told me the collection was owned by two gay men in Davenport, Iowa; I grew up in nearby Iowa City, and the first gay couple I knew lived in Davenport. But he wouldn’t give me any more information, and I don’t think anyone else has reported seeing the diary or letters.

In a conversation later that year with author and public intellectual Gore Vidal, the topic of Larry’s assertion came up. Gore was livid, saying Larry’s public claim “ruined the scholarship” on Lincoln’s sexuality by moving it into the realm of sensationalized activist speculation. Gore said he had been researching Lincoln’s homosexuality for a book but had dropped it, believing it “would be decades” before serious historians would reconsider the evidence.

It didn’t take that long. When psychologist C.A. Tripp died in 2003, he was working on a book about the “intimate life” of Lincoln, which compiled and analyzed the evidence of Lincoln’s homosexuality. Tripp was a former researcher with Alfred Kinsey whose work helped lead the American Psychiatric Association in 1973 to declassify homosexuality as a mental disorder (two years later, Tripp published the landmark book The Homosexual Matrix).

Tripp and Larry were in touch in the last months of Tripp’s life, and Larry was trying to fulfill what he said was a deathbed request of Tripp’s to get the Lincoln book published, despite opposition from much of the Lincoln scholarship establishment.

I had occasion to visit Tripp’s library at his home in Nyack, New York, not long after he died. I spent an afternoon casually perusing his collection of several thousand Lincoln-related books, articles and manuscripts. I was pulling volumes off the shelves and checking out the highlighted or underscored passages and many of the scribbled notes Tripp wrote in the margins or on Post-it notes.

One of the books was about an autopsy report on Lincoln. The doctor who performed the autopsy wrote—which I paraphrase from memory—“The president has the face of an old man but the body of a Greek god.” When I told Larry this, his eyes lit up. “Old Abe was a stud!” he said.

Another book, Personal Recollections of Abraham Lincoln, was written by Henry B. Rankin, who claimed to have been a law clerk in Lincoln’s law office in the 1850s. In his 1916 book, Rankin wrote about how obsessed Lincoln was with Walt Whitman’s Leaves of Grass. Rankin wrote that Lincoln took to reading aloud from Whitman’s work, telling people to pay attention to Whitman, that he was a great talent from which more would be heard.

Lincoln, he said, took the book home one night and brought it back the next day, telling Rankin he “had barely saved it from being purified in fire by the women.” Larry cackled with excitement when I read that passage to him.

Larry could gossip about hypothetically gay historical figures the same way he gossiped about contemporary friends. When he called Alexander Hamilton the “prick tease of the Revolution” and explained how Hamilton was Washington’s get-it-done go-to guy, he could just as easily have been talking about a group of friends at a house party on Fire Island.

While Larry’s activist voice became, in some ways, out-of-touch in his later years, his command of history grew stronger. One of Larry’s recent warnings—he always was warning us of what was to come—was how temporal our LGBT gains are. He believed that what we have accomplished politically since Stonewall is fragile and at great risk.

As we work to protect those gains—and seek to expand them—the strategies, perspectives and leadership will be different from that which Larry represented. But the courage to speak truth to power, the guts to be a lone voice if necessary and the anger and passion for change that Larry Kramer personified are more important today than ever.

This essay was adapted from an article originally published by the Los Angeles Blade.