Detail of an ad that HIV advocates say is misleading. Courtesy of GLAAD.org

Activists want the tech giant to take down similar ads with inaccurate claims about PrEP and HIV prevention.

Facebook has removed a selection of controversial ads about HIV prevention, reports The Washington Post. The move comes after nearly three months of prodding, including a letter from more than 65 HIV and LGBT groups urging the tech giant to take down the ads, a request Facebook initially declined. 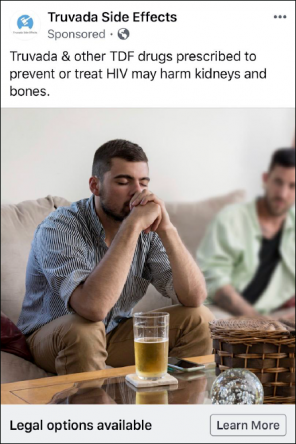 LGBT and HIV groups claim advertisements like these promote misinformation about PrEP.Courtesy of GLAAD.org

The ads in question were for personal-injury lawyers claiming that pre-exposure prophylaxis, or PrEP, was associated with severe bone and kidney damage. Advocates claimed the ads were false and misleading—the truth is that PrEP is highly effective and safe—and that the ads caused public harm because people at risk for HIV who could benefit from PrEP were being scared away.

“Removing select ads is a strong first step, but the time is now for Facebook to take action on other very similar ads which target at-risk community members with misleading and inaccurate claims about PrEP and HIV prevention,” said Sarah Kate Ellis, the president and CEO of GLAAD, in a press release from GLAAD, an LGBT advocacy group that spearheaded the effort to remove the ads. “Dozens of organizations have told Facebook that the safety and effectiveness of PrEP to prevent HIV transmission is unequivocal. The pervasiveness of these ads and the subsequent real-world harm should be catalysts for Facebook to further review how misleading and inaccurate ads are allowed to be targeted at LGBTQ and other marginalized communities.”

"The time is now for Facebook to take action on other very similar ads which target at-risk community members with misleading and inaccurate claims about PrEP and HIV prevention.” https://t.co/QqupUEy1r0

Facebook’s third-party fact-checkers at Health Feedback examined the ads in question and concluded that they lack context and are misleading. On HealthFeedback.org, the fact-checkers summarize the key takeaway:

Although the claim that the HIV drug Truvada can cause kidney damage and decrease bone density is accurate, and these side effects are stated in the drug’s prescribing instructions, the claim overstates the risks for those who take Truvada as a preventative rather than as a treatment. It also ignores the fact that the health benefits of taking Truvada for both HIV prevention and treatment may greatly outweigh the additional risks.

A @Facebook fact-checker backs us up, but Zuckerberg keeps dragging his feet on an adequate response.

“If this is their official response, after ignoring us for months, then it’s a mess,” said Peter Staley, a co-founder of the @PrEP4AllNow Collaboration.https://t.co/aauP6JQCt1

“It’s gratifying to see one of Facebook’s fact-checkers back up the overwhelming consensus of AIDS, LGBTQ and HIV medical groups that these ads are misleading,” HIV activist Peter Staley told the Post. “But Facebook has put a warning on only one ad thus far, with many more unaffected. If this is their official response, after ignoring us for months, then it’s a mess.”

To read more about the initial letter activists wrote to Facebook chairman and CEO Mark Zuckerberg, see “Outrage Over HIV Ads on Facebook.”

Facebook is allowing entities to target misleading and false ads about HIV prevention drugs to LGBTQ+ communities and others. This can have serious public health consequences. Facebook needs to put the safety of its users above its own advertising profits. https://t.co/J0TmEuqBuo

Thus far, the Food and Drug Administration has approved two forms of PrEP: Truvada and Descovy; both are daily tablets manufactured by Gilead Sciences. To learn more about the two meds, read “TAF Versus TDF: What’s the Difference?” And to read a collection of POZ articles about the prevention drugs, click #PrEP.

PrEP reduces the risk of contracting HIV by 99% in men who have sex with men. Furthermore, maintaining an undetectable viral load renders HIV untransmittable 100% of the time, a fact referred to as U=U. For more details, see “How Well Do U=U and PrEP Work? The CDC Updates Its Answers.” You can also learn about transmission risks, prevention and treatment in the POZ HIV/AIDS Basics.