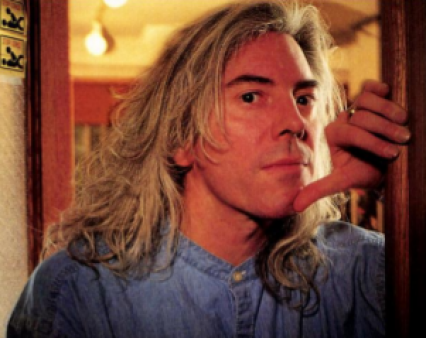 Patrick O’Connell in the June 1994 issue of POZ

Patrick O’Connell was instrumental in numerous Visual AIDS projects, notably the creation of the red ribbon and Day Without Art.

Patrick O’Connell, the founding director of Visual AIDS, which uses art to raise awareness of the epidemic and supports artists living with HIV, died of AIDS-related causes March 23, 2021, in Manhattan. He was 67.

O’Connell, who lived with HIV nearly 40 years, served as the group’s first director from 1989 to 1995, according to an Instagram post from the advocacy group. “Patrick was instrumental in coordinating and distributing our early AIDS activist projects, such as Day Without Art, Night Without Light, and the Red Ribbon,” the post reads. “Armed with a fax machine and an early Macintosh computer, he helped Visual AIDS projects reach thousands of organizations across the world.”

Perhaps the most far-reaching success was the Red Ribbon Project. Yes, those red ribbons, the ones that became ubiquitous in the early ’90s—donned at the Tonys and the Academy Awards—and remain a universal symbol for AIDS today.

O’Connell was profiled in the June 1994 issue of POZ in an article titled “See No Evil: Patrick O’Connell’s Visual World.” (View the entire issue, along with all our other editions, in the POZ digital archives.)

O’Connell was born in Manhattan, graduated from Trinity College in Hartford, Connecticut, with a bachelor’s degree in history and as a young adult pursued an art career, according to a New York Times obituary.

He worked at Hallwalls Contemporary Arts Center in Buffalo and Artists Space in Manhattan. He also served on the board of the National Association of Artists Organizations and was an adviser to the National Endowment for the Arts AIDS Working Group. In the 1970s, he was attacked in a hate crime while walking home from an East Village bar, reports the Times. The teenage assailants broke his arm, which required skin grafts and left him with a foot-long scar.

In the 1980s, he learned he had HIV. He also became sober and in 1989 helped launch Visual AIDS (he left in 1995 because of health issues, according to the Times obit). James Marrow, O’Connell’s longtime partner, died of cancer in 2000. 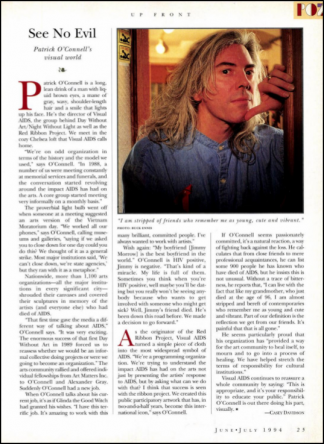 Patrick O’Connell in the June 1994 issue of POZ. Digital archives are available on POZ.com.

In talking with POZ in 1994 about the genesis of Visual AIDS, O’Connell said, “We’re an odd organization in terms of the history and the model we used. In 1988, a number of us were meeting constantly at memorial services and funerals, and the conversation started revolving around the impact AIDS has had on the arts. A core group started meeting very informally on a monthly basis.”

In 1989, the group spearheaded a nationwide effort in which over 1,100 art organizations,  such as museums, obscured some of their canvases and sculptures as a way to call attention to artists lost to AIDS.

“The first time gave the media a different way of talking about AIDS,” O’Connell says. “It was very exciting. The enormous success of that first Day Without Art in 1989 forced us to reassess whether we would be an informal collective doing projects or we were going to become an organization.”

A history of the Red Ribbon Project, posted on VisualAIDS.org, notes that:

In 1991, a group of artists came together to create a meaningful symbol at the height of the AIDS crisis—to show support and compassion for those with AIDS and their caregivers. These artists were a part of the Visual AIDS Artists’ Caucus and what they created was titled “The Ribbon Project,” better known today simply as the Red Ribbon.

Through a series of meetings in April and May of 1991, and using the yellow ribbons as inspiration, the Red Ribbon was born. The color red was chosen for its “connection to blood and the idea of passion—not only anger, but love...” The ribbon format was selected in part because it was easy to re-create and wear. The original instructions were to “cut the red ribbon in 6-inch length, then fold at the top into an inverted ‘V’ shape. Use a safety pin to attach to clothing.”

POZ Poll: Have you ever worn a red ribbon to raise awareness of HIV/AIDS?