My Best Sex-Ed Teacher Was a Playboy Playmate 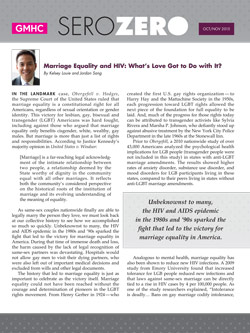 I was already a sexually active teenager by the time I began the sexual education class offered by my high school in suburban Colorado. Though the class did not teach an extreme abstinence-only curriculum, it failed to teach me how to better protect myself from sexually transmitted infections (STIs). Rather than also discussing safer-sex practices, we only learned ways to avoid unwanted pregnancies. I was taught to use a condom or “The Pill” for birth control so that I didn’t become another teenage pregnancy statistic, but I didn’t truly learn about how to protect myself from STIs until I went to college. As a result, I experienced years of ignorance, with plenty of opportunities for careless sexual encounters — until I met a Playboy Playmate.

In 2015, Congress passed a bill that increased funding by $25 million for states to adopt abstinence-only sex education curricula. While some members of Congress believe that abstinence-only is effective in preventing youth from becoming sexually active, research shows other­wise. By the time teenagers are 17, 48 percent have had sex. That proportion increases to 71 percent by the time they reach age 19. Research has also shown that youth who are only taught abstinence are less likely to use protection when they start having sex, and they are also less likely to be tested for STIs.


Approximately 25 percent of clients at Gay Men’s Health Crisis (GMHC) are women who are either living with or affected by HIV and AIDS. The women in GMHC’s Action Center, which empowers clients to advocate for public policy at the city, state, and federal levels, have shared significant concerns about the lack of accurate information about HIV they received when they were in school. They also report that they were not taught about risks in relation to early sexual experiences, and they share a mutual concern about incomplete sexual education for youth in their neighborhoods today.

Unfortunately, the myth of HIV as a “gay disease” still exists. When school curricula fail to disparage harmful beliefs like this, students remain uneducated about their own risks for infection. Additionally, this misinformation is harmful because it allows anti-LGBT bias and ignorance about people living with HIV to persevere. Like many of my peers, I grew up associating condoms with reproduction, rather than protection. Little did I know that one in four people living with HIV in the United States is a woman, and that most new HIV infections among women result from heterosexual sex.

When I was in college, a former student group known as the Queer Initiative at the University of Colorado Boulder hosted the AIDS Memorial Quilt each year. In addition to displaying the Quilt, the group usually sponsored a speaker to share his or her personal experience with HIV or AIDS. In 2011, I attended this speaking engagement with some of my girlfriends, and that’s when I met Playboy’s Miss September 1986, Rebekka Armstrong. Rebekka contracted HIV from an unprotected sexual experience in high school, and she didn’t find out she was positive until four years later, at the young age of 22. Since then, she has become an HIV advocate and is one of the most well-known representatives of HIV transmission among heterosexuals.

Rebekka began her speech by ripping open a condom proudly above her head. The room responded with nervous laughter as she took out a yellow, latex condom. Then, she proceeded to stick her hand, balled into a fist, inside the opening of the condom and stretched it slowly down to her elbow. She looked into the crowd of confused college students and proclaimed, “If he says it doesn’t fit, IT FITS! I assure you, IT FITS!” The crowd laughed and cheered. My girlfriends and I looked at each other wide-eyed with disbelief.

I listened to Rebekka in awe. As a young, white, heterosexual woman in suburban Colorado, it never crossed my mind that I could be infected with HIV. Like Rebekka, I also had sexual encounters where my partner said the condom was too uncomfortable or didn’t fit right. Looking back, my judgment was clouded by a lack of education about how to better protect myself.

After the speech, I sat with my girlfriends and we reminisced about past sexual encounters. We tried to make excuses, but after listening to Rebekka no excuse justified the fact that we did not better protect ourselves from STIs. We committed to getting better educated, to getting tested together, and most importantly, to using protection with all future sexual partners.

Rebekka was enlightening and unforgettable. She made me realize that contraception is not only about preventing unwanted pregnancies. It’s also about reducing risk for HIV and other STIs. This is what I should have learned in my high school sex-ed class.

Instead of avoiding the conversation by teaching students to abstain from sexual contact altogether, sexual education classes in high school should educate teenagers about how to better protect their health.
It’s imperative that young women — and men — learn about STIs, especially HIV and AIDS. Abstinence-only sex education harms public health and is a misuse of fundamental resources. We need a common sense approach to ending the HIV and AIDS epidemic, and ignorance is not the answer.

Sometimes, it takes a Playboy Playmate elbow deep in a latex condom to provide the best sex education.