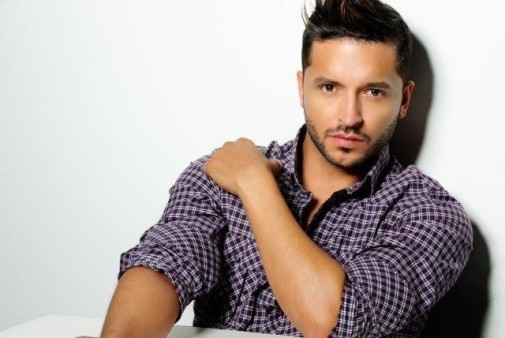 As a teenager in the mid-1990s, Jai Rodriguez lost a beloved aunt to AIDS. Shortly afterward, he was channeling her energy every night on Broadway, in his breakout role as Angel, the HIV-positive character in the smash musical Rent. In his 20s, Rodriguez rocketed to global fame on TV’s Queer Eye for the Straight Guy. He hasn’t stopped working since—nor has he stopped speaking out for sexual health and HIV awareness. His latest adventure in advocacy is as a spokesman for the “Positively Fearless” campaign.

Launched by HIV med Prezcobix, “Positively Fearless” aims to empower and educate Latino and Black men who have sex with men (MSM). If current HIV rates remain steady, it’s predicted that one in two Black MSM and one in four Latino MSM will be diagnosed with HIV in their lifetime—compared with 1 in 11 white MSM. So it’s a timely and important campaign. We’re also in the midst of Hispanic Heritage Month, which began September 15, and we’re coming up on National Latinx AIDS Awareness Day (NLAAD), marked annually each October 15. In other words, it’s a perfect time to catch up with Rodriguez. POZ spoke with him while he enjoyed a rare break from filming TV episodes of Wisdom of the Crowd and performing live in the Las Vegas show Sex Tips for Straight Women From a Gay Man.

I gotta ask, do you and costar Kendra Wilkinson serve up real sex tips in your Vegas show? And do you talk about safer sex?

Yes! We do. There’s no profanity, but we use colorful language and biological charts. We don’t talk about intercourse too much—it’s more about foreplay—but we do get in references to condoms and playful euphemisms for them.

In looking at your bio, I was struck by all the sex-positive advocacy under your belt.

True. About seven years ago, I was cocreator of a series for Logo [called Bad Sex] starring my boyfriend at the time, Dr. Chris Donaghue—he’s a certified sex therapist and a cohost on Loveline and other shows—we were together, like, three years. It ran two seasons, but it did impact how I see human sexuality and the way I approach advocacy. I’ve been doing HIV advocacy since 1996, and so if you think about it, it’s over two decades.

How did you first learn about HIV and get involved in that work?

It was at an intimate level after losing my aunt and cousin [to AIDS] and then an organic tie-in playing the HIV-positive character Angel in Rent on Broadway for half a decade. My aunt came out as HIV positive when I was, I think, 15. When Thanksgiving came around, she invited over all her brothers and sisters and parents and nieces and nephews older than 16, and she came out and said she was starting to lose her vision and would need more assistance. She was seeing friends and children she met in hospitals pass away, so she pulled herself and my cousins off meds. There was no voice of reason in her medical care, so she just gave up on medication. My cousin passed away first, then a few months later she did. I was 16. She died in the summer of 1997, and it really did impact the shape of my life.

Obviously, you’re very open about this experience, but how did the rest of the family react?

To this day—to this day!—I cannot get them to post on Facebook that I’m doing an AIDS Walk in honor of my aunt. To this day, they will not post or talk about the fact that a member of our family died of it. It is entrenched in such shame.

I have never ever felt it. But a year [after her death], I had an opportunity to channel my aunt’s energy through Angel in Rent. That was my way of grieving and moving forward. Maybe I had an unfair advantage, but it also helped me meet thousands of people infected and affected by the virus, and I became educated about it. Maybe I live in a place today where I have more people who are understanding and educated about it than my family. But their level of shame is hard for me.

Do you think this sort of shame around HIV is common in other Latino families and in the Latino community?

Absolutely! There was a level of “It’s not meant to happen to her. She’s from Long Island. She had kids, a boat, a house. It happens to other people because they did something bad.” And so that is kind of the mentality I grew up with, and if people still abide by that, then I can see how their choices might reflect that.

And I saw this whole range of issues that came with [an HIV diagnosis and the shame]. I watched my aunt go to a dentist, and I saw the dentist put on several pairs of gloves in front of my aunt—when it’s just for a routine cleaning—because he was petrified. I watched her eyes well up with tears of shame. On Mother’s Day, my mom brought her, at hospice—she wasn’t fragile or sick-looking, but was at a hospice—we were going to church or something, and my aunt said to my mom, “I can’t go in hospital clothes. Can you get me something?” So my mom did and wrapped it up as a Mother’s Day gift. It was a pink sweatshirt and sweatpants, and my aunt saw [them] and cried. My mom said, “What’s wrong?” My aunt said, “You’re treating me like a patient and not a person. I want to feel like a woman again and put on pantyhose.” I will never forget that moment because a year later I’m singing, “Will I lose my dignity? / Will someone care?”

The way other people view this virus and the stigma attached is almost as horrible as the virus itself. The shame is paralyzing—[it causes] people to refuse to get tested or take treatment. And the fear and shame are higher in the Latino community. I can’t image [how you’d feel] if you are a young Latino man, and you found out your status, and no one in your family has known anyone with HIV or even spoken positively about it. Within our community we can do better, that’s why I love this campaign, and the title is perfect.

If statistics keep going the way they’re going, one in four Latino men who have sex with men will test positive. And we have so many ways to prevent transmission if you have the knowledge. I’ve been doing this work for 20 years, but I’m the first to raise my hand and say I didn’t know that HIV rates were rising [among] Latino and Black men who have sex with men—you could say gay and bisexual, but lots of men don’t identify as that. I honestly really did think that infections were going down universally, so it became a personal issue with me. It could have been me [among the one in four] if I had not witnessed somebody dying from this.

Finally, where can our readers see you?

I’m currently on Dice (Andrew Dice Clay’s show) on Showtime. I play David Silva on Jeremy Piven’s drama on CBS, Wisdom of the Crowd. I’m on Twitter and Snapchat and Instagram. I’ve got the Vegas show six days a week. There’s Grey’s Anatomy, The Magicians. It’s cute to be working—and to be putting my loud mouth to good use!

For more about the campaign, visit PositivelyFearless.com. And to read the POZ interview with fellow spokesperson Todrick Hall, read “Look What You Made Todrick Hall Do…for HIV Awareness!”