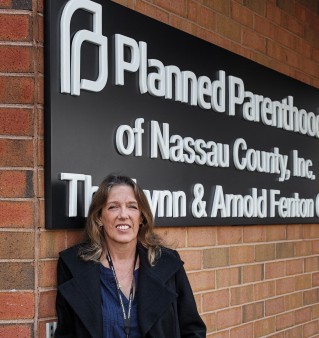 Nancy Duncan outside her workplace in Long Island Bill Wadman

Sexual Health Care For All

Nancy Duncan, a peer educator for Planned Parenthood in Nassau County, New York, seeks out women at risk for HIV where they’re likely to gather—in nail salons and laundromats, on the street—to encourage them to be tested for the virus.

Duncan, who has been doing this since 2004, is used to being rebuffed by those she seeks to help. Some women want nothing to do with Planned Parenthood because of the release in 2015 of secretly recorded, heavily edited videos that suggested the organization was profiting from the sale of tissue from aborted fetuses. Other women laugh and say they’re long past having to worry about birth control.

“Our mission is for safe reproductive and sexual health care for all, regardless of sex or gender,” says Vanessa Cullins, MD, vice president for external medical affairs at Planned Parenthood Federation of America. “Planned Parenthood has been pigeonholed as only an abortion provider, and nothing can be further from the truth.”

State and federal efforts to defund Planned Parenthood, spurred in part by the videos created and released by an anti-abortion group, fail to recognize the organization’s critical role in helping to prevent and treat HIV, supporters say.

Besides HIV tests, PrEP and PEP, Planned Parenthood promotes safer sex practices, such as the use of condoms and dental dams; when people test HIV positive, it connects them with specialists, Cullins says.

Despite these HIV services being provided by the organization nationwide, Texas officials decided in December 2015 to strip a local affiliate, Planned Parenthood Gulf Coast, of $600,000 in federal HIV funds.

The stripped funding came annually from the Centers for Disease Control and Prevention for testing and counseling for HIV, distributing condoms and connecting people who test HIV positive to care, mostly in Houston. 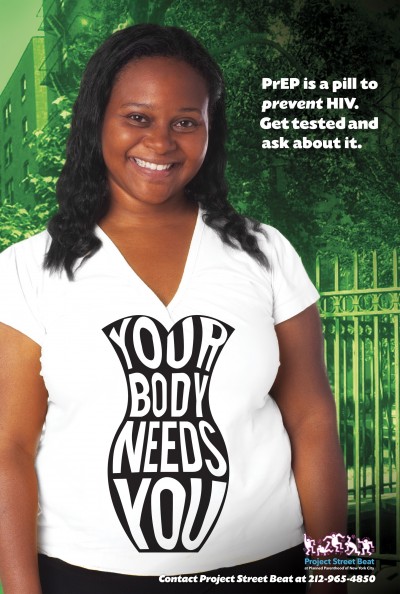 “Planned Parenthood has been in the political crossfire forever,” says Jennifer Sherwood, a policy associate in the public policy office of amfAR, The Foundation for AIDS Research. “It’s an unfortunate reality. Planned Parenthood is sort of always on the chopping block. It’s discouraging, because it’s such an important provider of women’s health care and HIV care.”

Some observers have linked a 2015 HIV outbreak in rural southeastern Indiana, fueled by injection drug use, to the closure of the local Planned Parenthood clinic two years earlier.

“It was part of a whole bigger restructuring having to do with some other funding decisions that were made,” says Patti Stauffer, vice president for public policy at Planned Parenthood of Indiana and Kentucky, regarding the closure of the Scott County, Indiana, center.

The state has seen a steady decline in funds devoted to the public health infrastructure, Stauffer says. Public health officials are now examining the impact of that decline. Besides the HIV outbreak, Indiana has also seen increases in hepatitis C and syphilis, she says.

If Planned Parenthood hadn’t closed in Scott County, “we would like to think that maybe we would have caught [the HIV outbreak] sooner,” Stauffer says. “That’s all speculation. But I would argue that a strong public health system is better than a weak one.”

There are some promising recent developments related to Planned Parenthood and HIV around the country. For example, Planned Parenthood is well positioned to be in the forefront of providing PrEP to at-risk individuals, especially women, many of whom don’t even know they can take it, says Robert Grant, MD, MPH, whose lab at the Gladstone Institutes, an independent, nonprofit biomedical research organization affiliated with the University of California, San Francisco, first proved the concept of PrEP in 2010.

“I think for PrEP, Planned Parenthood is ideal, because they are specialists in sexual health and sexual health care,” Grant says. “PrEP is in part inspired by birth control pills. Women know very well that people will and can take a pill a day to prevent pregnancy.” As a woman-controlled method to prevent contracting HIV, PrEP is empowering, he says.

Planned Parenthood centers that can provide same-day service are also a logical place for PEP, Grant says: “When you need it, you need it right now.” But the centers are so popular that people sometimes have to wait for an appointment, he says, at which point they might be better off going to an emergency room or a primary care doctor to get PEP.

In 2015, 10 of Planned Parenthood’s 59 affiliates offered PrEP, and another dozen are expected to begin providing it this year or next, Cullins says. The number of affiliates offering PEP is expected to triple over the next two years, from six to 18, she says.

One affiliate that plans to begin offering PrEP this year is New York City.

As its name suggests, Project Street Beat serves women, men and teens living and working on New York City streets. It is an HIV prevention and risk-reduction program that also connects HIV-positive people to medical care.

“It is important that women understand that the FDA [Food and Drug Administration] has approved PrEP for them,” she says. “We have kind of stumbled out of the gate in making that clear. I think women, in the beginning of this whole PrEP rollout, were left out of the conversation. I think it was a missed opportunity.”

To correct that misstep, this spring Project Street Beat is launching a social marketing campaign, funded by the New York City Department of Health and Mental Hygiene, aimed at spreading the word about PrEP to African-American women and Latinas, Tillett says.

Project Street Beat already offers HIV risk-reduction counseling. Counselors meet with at-risk individuals one-on-one or in groups, weekly or every other week, at a Planned Parenthood clinic or in their neighborhood. Sometimes the counselors provide advice that goes beyond traditional health care. If someone is trading sex for a place to sleep, for example, the counselor will talk to him or her about how to get out of that situation. 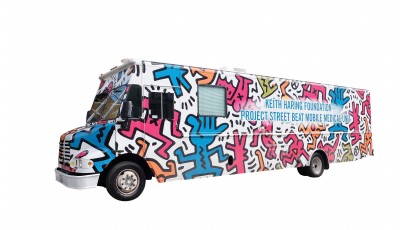 Planned Parenthood of Nassau County, New York, has its own van that offers testing for HIV and other STIs in high-risk Long Island neighborhoods, such as near the bus terminal in Hempstead, as well as on college campuses. Lately, the Nassau County Department of Health has been accompanying the van and offering $20 or $25 grocery store gift cards as incentives to get tested.

College students don’t seem to need an incentive. On campuses, 15 or 20 people, mostly women with a sprinkling of gay and straight men, might be tested in a 4- or 5-hour visit, Duncan explains. “Thank God, most people are negative.”

Instead of offering testing in the van, she says, “sometimes we just do outreach. Sometimes we’ll just take my supervisor’s car, and we’ll park it.” Then they’ll distribute cards that show the proper use of male and female condoms. “Most women take them. Some don’t. We tell them that we do free HIV testing and that if they’re sexually active, they should get tested every year.”

If the women are receptive to her message and want to talk about it, the 58-year-old Duncan says, “I may tell them I’m a person who’s been living with HIV for 30 years.” That doesn’t happen as often as she’d like.

But the people in clinic waiting rooms are a captive audience, and two or three times a month, Duncan, who lives in Nassau County, presents what she calls “HIV 101.”

“Some people are not there for that, and they don’t pay attention,” she says. “Once I start talking about myself, they pay more attention. Now it’s more personal. They get taken aback a little. Maybe they didn’t know anything about HIV, and now they know something about it.”

When Rachel Moats lacked health insurance, she turned to Planned Parenthood in San Diego for birth control and Pap smears.

The organization is a health care safety net for low-income Americans, with nearly four out of every five of its patients living at or below 150 percent of the federal poverty level.

On a routine visit on March 19, 2013, a rapid HIV test revealed that Moats, who’s now 32 and the mother of a 12-year-old girl, was positive. A previous test, in December, had been negative.

It would have taken seven to 10 days to get the results of a confirmatory blood test, Moats recalls, but she couldn’t wait to tell her only sexual partner, the man she described as her best friend. If his rapid test showed he was HIV positive, that was proof to Moats that hers was accurate too.

He lived in Las Vegas and was first in line at a Planned Parenthood center there the next morning. He called Moats afterward. “Rachel, I’m so sorry,” he told her. And yet, Moats says, “I kept waiting for him to say, ‘I’m kidding.’”

Learning she was HIV positive changed the direction of Moats’s life. She had long toyed with the idea of moving to New Orleans. “I came to visit a few times after Hurricane Katrina, and I just loved it. I love the people and the food and the culture and the architecture.”

After she learned she was positive, she started reading about HIV and discovered that the virus was spreading more quickly in New Orleans than in just about any other U.S. city. “That was kind of the thing that sealed it with me,” Moats says. “I felt I could help with the stigma. I just felt it’s where I needed to be.” Late last year, she became a certified HIV test counselor in New Orleans. 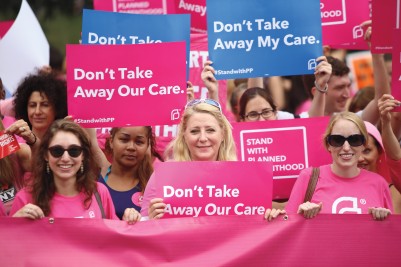 Besides its efforts to stop the spread of HIV, “Planned Parenthood fulfills a critically important role in ensuring access to non-stigmatizing sexual and reproductive health care for women living with HIV,” says Naina Khanna, executive director of Positive Women’s Network USA (PWN-USA). “Even 30-plus years into the epidemic, it is just all too common that women with HIV are discriminated against.”

PWN member Christina Carta, a divorced Massachusetts resident who turns 40 in March, learned she had HIV after a partner discovered that he had the virus.

With proper prenatal care, she went on to have three children—all HIV negative. To this day her father does not know she lives with HIV, Carta says.

For many years, Carta, a nursing assistant, has lacked insurance and turned to Planned Parenthood for biannual cervical cancer screening. She has an elevated risk of the disease. For one, her mother was diagnosed with it at 27, and that factor alone doubles or triples a woman’s risk, according to the American Cancer Society.

Plus, women living with HIV are at least five times more likely to be diagnosed with cervical cancer than women who are HIV negative, according to the National Cancer Institute.

Carta moved from Kentucky to Massachusetts in 2013 in search of better health care and job opportunities. But, she says, she’s fearful of going to her nearest Planned Parenthood clinic because of the anti-abortion protesters out front, so she hasn’t been screened since last spring.

Carta, who says she’s been diagnosed with anxiety and depression, is hopeful that the protests will have died down by the time of her next Planned Parenthood appointment in April. Meanwhile, she’s grateful for the care she’s received from the organization. “They’ve made a difference in my life.”

In 2015, slightly more than 300,000 of the 2.7 million people seen at Planned Parenthood were men, says Cullins, the external medical affairs vice president, and HIV tests represented nearly a quarter of the services they received.