So You Think You Can Dance All Stars at the 21st Steve Chase Humanitarian Awards, February 7, 2015, in Palm Springs, CA. Gregg Felsen

The 21st Steve Chase Humanitarian Awards were presented in a ceremony on February 7 in Palm Springs, California. The annual fundraiser honors individuals for their contributions in the fight against HIV/AIDS and supports the work of the Desert AIDS Project (DAP). This year’s event raised an estimated $1.3 million. The awards are named for renowned interior designer Steve Chase, a DAP donor, volunteer and board member who died of AIDS-related complications in 1994.

Founded in 1984, DAP serves people living with, affected by or at risk for HIV in the Coachella Valley. In addition to its HIV health center, DAP also provides case management, mental health and substance abuse counseling, housing assistance, and many other comprehensive services to its clients. The organization also provides HIV testing as part of Get Tested Coachella Valley—a region-wide public health program that encourages everyone to get tested.

“Imagine” was the theme for this year’s awards, which was hosted by comedian Mario Cantone. The audience was asked to imagine a world without HIV, to imagine an AIDS-free generation and to imagine themselves helping to create that world.

Tony-award winner Shoshana Bean performed at the event along with the So You Think You Can Dance All Star Cast, who told the story of a serodiscordant gay couple and how HIV affected their relationship. The original performances were choreographed by Mandy Moore.

Dr. Michael Gottlieb, who diagnosed the first AIDS cases in 1981 and was a founding chair of amfAR, the American Foundation for AIDS Research, was presented with the Science and Medicine Award by Dr. Steven Scheibel. Philanthropist Helene Galen was presented with the 100 Women Award by U.S. Senator Barbara Boxer for her generous contributions over the years. The Partners for Life Award was presented to David Morgan, owner of Reaction Marketing and Promotions, by actor Leslie Jordan. And legendary fashion designer Bob Mackie honored Joan Rivers with a special tribute for her legacy of AIDS-related work.

Timothy Ray Brown, the first—and so far only—person successfully cured of HIV, also spoke at the awards gala and was a testament to the idea that if we can imagine a life with HIV, it can actually come true.

Click here to learn more about the Desert AIDS Project. 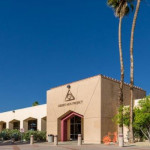