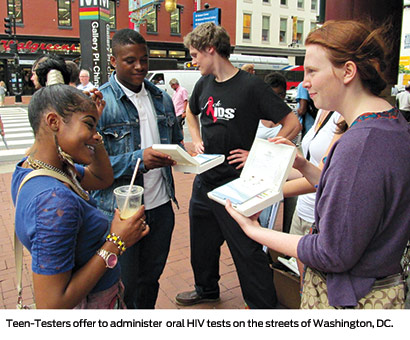 In a controversial HIV awareness campaign, a group called Teen-Testers is approaching youths on the streets and at parks, offering them an oral HIV test on the spot, in front of all their friends. The results, too, are given publicly, often while cellphones record the process.

Teen-Testers is a sub-group of Virginia-based TeenAIDS-PeerCorps, which consists of college interns and is run by John Chittick, EdD. The goal is to raise awareness about HIV, specifically, to let the youth know that an over-the-counter test by OraSure is on the market. (OraSure doesn’t finance the events, Chittick says, adding that his group purchases tests with donated money.)

So far, Teen-Testers has approached groups of youths at public venues in several Virginia cities as well as Washington, DC. Volunteers who get tested sign releases and show identification. Limited funding allows for only one person in each group to get swabbed. As they wait together for the results, the Teen-Testers team counsels about HIV/AIDS, safer sex and what the test results mean.

“We’ve found that young people don’t want to go to a family doctor or to a clinic to get tested,” Chittick says. “They prefer the oral, not the blood test, and they prefer to have their friends there for moral support.”

Compared with the secrecy and anonymity associated with most HIV testing, such public displays of advocacy may seem radical, if not illegal. Indeed, at Virginia Beach, the authorities intervened, but Chittick was soon allowed to resume. The test is sold at drug stores and requires no medical training, Chittick points out. “There’s no blood, no lab work, no refrigeration. And there’s no counseling except a 1-800 number. If we’re doing this on the street, does it make us accountable under the law for meeting medical standards? I say no. But the law isn’t clear.”

Twice, Teen-Testers found results that were positive. One was a young man at a skate park with two buddies. “His friends were very sensitive and empathetic,” Chittick recalls. “And we told them where to go for a confirmatory test. Unfortunately, we have limited funding, so it’s not like I can carry around a second test to do again.” Similarly, the girlfriend of the second young man who tested positive requested she be tested, but she was denied because of limited supplies. The couple then went for a confirmatory test and later informed Chittick the original was a false positive.

The kids who readily volunteer, Chittick observes, are often ones who know family members or other people living with HIV. But not everyone is up for the test. “Frankly,” he says, “I think those who think they might be at risk are those who are not so eager to be publicly tested.”