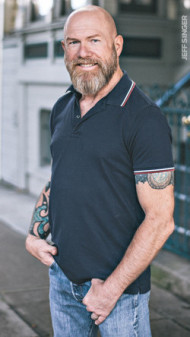 Tez Anderson, a 55-year-old San Franciscan living with HIV since at least 1983, has been an AIDS activist for decades, including rallying in ACT UP Golden Gate in the 1990s. But five years ago, he had a mental breakdown. It was the culmination of two decades of alienating his friends, falling in and out of depression and completely ignoring his finances and his future.

Looking back, Anderson realizes he was still stuck in AIDS survival mode—and it was driving him crazy. “Every time I took those pills,” he says, “I was reminded of those that I lost.” What Anderson didn’t realize at the time, however, was that he was not alone.

Fast-forward to June 18, 2014, when more than 250 people showed up in solidarity for the first National HIV/AIDS Long-Term Survivors Awareness Day. Organized by Anderson’s new San Francisco grassroots support group, Let’s Kick ASS (AIDS Survivor Syndrome), the event helped bring awareness to the trauma and mental health issues faced by those who made it through the early years of the epidemic.

“We want to end the isolation and help people imagine the future they never dreamed of,” says Anderson, who chose the date as a way to commemorate his fellow fighters; it marked the 33rd anniversary of the Centers for Disease Control and Prevention’s first report of what became known as AIDS.

After a day of planting trees in San Francisco’s National AIDS Memorial Grove, attending survivor-themed talk shows, holding support programs for HIV-positive and HIV-negative advocates, and garnering more than 1,000 Facebook “likes” for the long-term survivors’ movement, Anderson knew he had started something serious.

The vibe, he says, was reminiscent of the old ACT UP but with a modern feel. “People wanted to take action,” he recalls. In fact, the group’s next goal is to get “AIDS survivor syndrome,” which is similar to post-traumatic stress disorder (PTSD), on the mental health map. They want clinical studies and national insurance coverage.

“If AIDS had happened mostly to straight white men, there would probably be AIDS museums in every city of America,” Anderson says. He has a point: So far, AIDS has claimed more American lives than both world wars.

Let’s Kick ASS currently meets in San Francisco for monthly town halls, weekly coffee get-togethers and regular meditation classes. The group is considering opening new chapters in Houston and Portland, Oregon, and is reaching out to cities across the country.

Go to letskickass.org for more information.