#2021USCHA—the U.S. Conference on HIV/AIDS—may have ended, but you can still experience it via these pics, tweets and videos.

The 25th annual U.S. Conference on HIV/AIDS (#2021USCHA) took place last week. But thanks to social media, much of the information and inspiration shared throughout the two-day virtual event remains at your fingertips. Below, we round up screengrabs, tweets, posts and videos that capture #2021USCHA.

But first: According to NMAC, the nonprofit that organizes the annual event, over 2,400 people registered for the HIV/AIDS conference, which included panel discussions, 140 workshops, poster presentations, an exhibit hall (POZ was present!), real-time chat rooms, games and much more. In the years before COVID-19, the conferences were held in person at different cities across the nation. This year marked the second time the event was completely virtual. That might change in 2022. NMAC (previously known as the National Minority AIDS Council) announced that the next USCHA will take place October 8 to 11, 2022, in San Juan, Puerto Rico. Cross your fingers, and mark your calendars now!

In the meantime, you can view the opening and closing plenary discussions from #2021USCHA in their entirety on NMAC’s YouTube channel (and in this article). The conference kicked off with a cultural blessing from James F. Paisano, a member of the Navajo Nation. 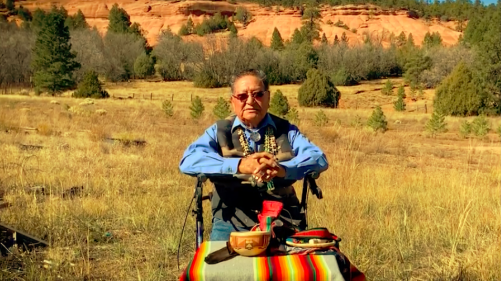 James F. Paisano, of the Navajo Nation, opens USCHA 2021 with a cultural blessing.YouTube/NMAC

Paisano’s presence made for a nice bookend of sorts because the closing plenary discussion was titled “Foundation Stones to Building the [Ending the HIV Epidemic] Effort in Indian Country.” You can watch that session below.

The video of the opening session is posted at the top of this article. Titled “Federal Perspectives on HIV in the COVID Era,” the event included insight from numerous national leaders, including keynote speaker Anthony Fauci, MD, the chief medical adviser to President Joe Biden and the director of the National Institute of Allergy and Infectious Diseases. Harold Phillips, who leads the Office of National AIDS Policy, and Admiral Rachel Levine, the assistant secretary of the Department of Health and Human Services, spoke about the updated National HIV/AIDS Strategy, which was released World AIDS Day, December 1. 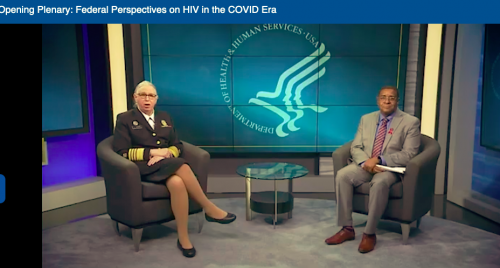 A highlight of the plenary was the appearance of Speaker of the House Nancy Pelosi (D–Calif.), who received the first-ever lifetime achievement award from NMAC. To watch her speech in the video at the top of this page, forward to the 1:01 mark. She said, in part:

When I came to the Congress 24 years ago…in my acceptance speech on the floor, I [made an] urgent call to combat the AIDS crisis. Since then, Congress and our partners have made extraordinary progress, bringing billions of dollars to fight the epidemic at home and abroad; creating affordable housing opportunities for low-income survivors; securing access to quality, affordable, community-based care for those living with HIV through the Ryan White CARE initiative; and fighting discrimination against preexisting conditions like HIV/AIDS within our Affordable Care Act.…

This year, our nation marks a solemn milestone: 40 years since this ferocious virus was discovered. So let us recommit to carrying on this fight so we may someday banish HIV/AIDS to the dustbin of history and achieve an AIDS-free generation.

USCHA 2021 featured a screening of the documentary Fauci, about the man whom many Americans first learned about via his role in the COVID-19 response but has also been instrumental in the fight against the HIV epidemic since the 1980s.

Throughout the two-day conference, a diverse group of participants and attendees posted and promoted their events and viewing schedules online, illustrating the wide variety of topics covered in workshops and discussions. Here’s a sample of #2021USCHA tweets:

“I’ll be so happy when we can finally attend another in-person conference together, to walk the halls and see friends that you know…truth be known, my network is the secret to my strength and success as an advocate. ” -@KatieAWpphoenix on #2021USCHA https://t.co/fFTWYcJhyU

On the heels of #WorldAIDSDay, we reflect on the power of culture as a tool in the fight to end #HIV stigma. Thank you to our panelists @imarajones, @Jesucia, @IamGMJohnson and Darnell Moore for joining us at #2021uscha to facilitate this important conversation. #AllofUs2021 pic.twitter.com/L50PD1Ca7P

Such a great conversation today about the inequalities and the intersection of global and US domestic HIV. Thank you for having me on @AIDS_United @theglobalfight for a thought-provoking dive int AIDS as a global, racial, and economic justice issue. #2021USCHA pic.twitter.com/ly0exqqvby

In many cases, the events offered groups a chance to debut and discuss new videos and programs, like NMAC’s inspiring video profile of advocate Linda Scruggs.

In another example, the Prevention Access Campaign, known for spearheading the Undetectable Equals Untransmittable (U=U) movement, shared its new video, Journey to 400,000, which premiered World AIDS Day, during a session devoted to the topic. The title references the 400,000 people estimated to be living with HIV in the United States who are not virally suppressed.

The closing plenary ended with a look forward. Long-term survivor Joey Pons, the cochair of the host committee for USCHA 2022, welcomed everyone to the beautiful islands of Puerto Rico, which will host the conference for the first time. More details will be available on the USCHA 2022 website, slated to launch in February. 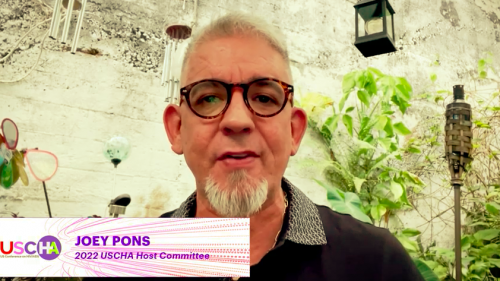