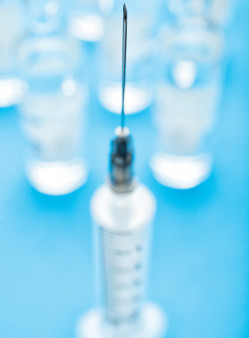 Promising findings from a study of a two-drug injectable treatment given every four weeks.

Monthly injectable treatment for HIV may soon become a reality thanks to promising findings from an ongoing Phase III trial of a long-acting injectable formulation of the antiretrovirals (ARVs) cabotegravir and Edurant (rilpivirine) given every four weeks. The study includes 618 adults who had fully suppressed HIV for at least six months upon entering the trial, at which point they were taking a daily oral regimen that included two nucleoside/nucleotide reverse transcriptase inhibitors (NRTIs) plus an additional oral ARV. The participants were randomized either to stay on their current regimen or to switch to the long-acting injectable treatment. Because a similarly low proportion of each study group had a detectable viral load 48 weeks into the trial, the long-acting injectable treatment is considered noninferior to, or as effective as, daily oral regimens. The injectable regimen also posted good safety marks.