After a Decades of Stagnation, U.S. HIV Infection Rate Falls

The CDC estimates that annual new HIV infections declined 18 percent between 2008 and 2014.

Findings from the CDC’s new analysis, including a report that focused specifically on HIV rates among men who have sex with men (MSM), were presented at the 2017 Conference on Retroviruses and Opportunistic Infections (CROI) in Seattle. The CDC arrived at its estimates by analyzing HIV diagnosis data as well as post–HIV diagnosis CD4 counts reported to the National HIV Surveillance System between 2008 and 2014. Researchers used mathematical models to estimate how long individuals had been infected by the time they were diagnosed based on their CD4 count.

The CDC attributes much of the HIV incidence decline to successful efforts to increase the proportion of those living with the virus who are diagnosed, on treatment and virally suppressed. A large body of research has shown that an undetectable viral load is associated with an extremely low risk of transmission of the virus; the risk may in fact be zero.

In addition, CDC officials believe that the advent of PrEP—which was approved in 2012 and after a slow start began to gain in popularity in 2013, largely among white MSM older than 25—may have contributed to dropping HIV rates in more recent years.

The new analysis also found regional disparities in estimated HIV incidence. Although the South is home to only 37 percent of the U.S. population, 50 percent of estimated new HIV infections in 2014 were in Southern states.

In a press release, Jonathan Mermin, MD, director of the CDC’s National Center for HIV/AIDS, Viral Hepatitis, STD, and TB Prevention, addressed concerns about the expanding opiate addiction in the United States.

“The opioid epidemic in our country is jeopardizing the dramatic progress we’ve made in reducing HIV among people who inject drugs,” Mermin said. “We need to expand the reach of comprehensive syringe services programs, which reduce the risk of HIV infection without increasing drug use and can link people to vital services to help them stop using drugs.” 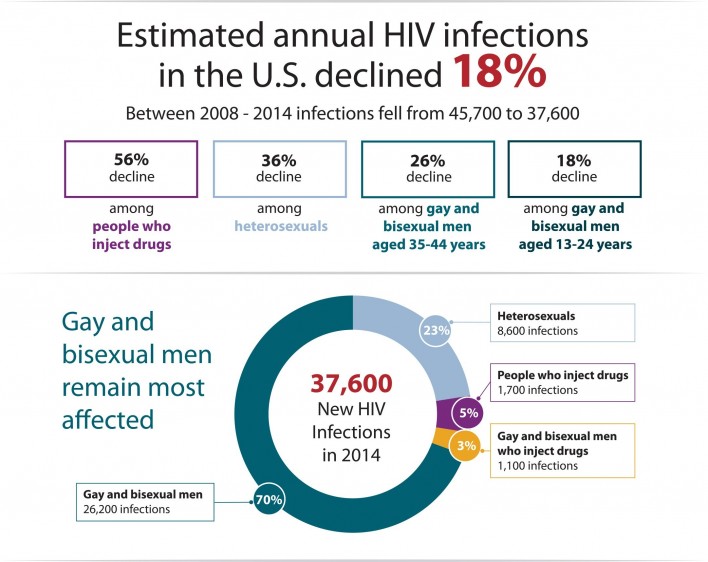 For a fact sheet about the overall HIV incidence analysis, click here.

For a POZ feature article on how the Trump administration may affect the future of syringe services programs for IDUs, click here.