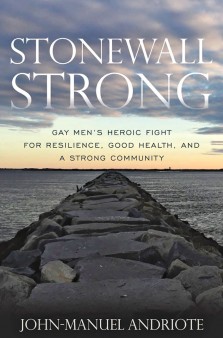 In a blog post titled “Are You a Victor or a Victim?” POZ deputy editor Trent Straube interviews John-Manuel Andriote about his latest book, Stonewall Strong. Here is an edited excerpt of their conversation.

Since he began reporting about AIDS in the mid-1980s, journalist John-Manuel Andriote has been a vital voice in the epidemic. In 1999, he published the pivotal Victory Deferred: How AIDS Changed Gay Life in America, which he updated and expanded in 2011. Andriote has also chronicled, in the public eye, his own 2005 HIV-positive diagnosis. His most recent book is Stonewall Strong: Gay Men’s Heroic Fight for Resilience, Good Health, and a Strong Community.

What takeaways from Stonewall Strong can be applied to people with HIV?

One point I make from my own life story, which I draw from in the first part of the book, is that from the time of my HIV diagnosis, in 2005, I was very clear that I did not want to be defined by my HIV status. I am so much more than a medical diagnosis.

This is a key theme of the book, as I look at the different sources we have for knowing who we are—including our sexual orientation; our family and place of origin; our ethnic community; our faith tradition, if we have one; and so on. We can draw upon all our sources of identity, taking from each its best examples.

Resilience is important for us to live well with HIV without letting it consume us. This is a luxury and privilege we HIV-positive folk enjoy today, when effective medications let us go about and enjoy our lives “in spite of” the viral coresident in our body.

What role did HIV play in the development of resilience among gay men?

HIV/AIDS has been the fire that has tested our mettle and showed us what we are made of, who we are despite all the trauma we suffer in our lives from the time we are boys when we first become aware of being “different” and are frequently bullied and abused because of it. HIV/AIDS really showed gay men in particular our own courage, resilience and strength. It also showed the world an entirely new picture of who we are.

The epidemic gave us a new, powerful frame for our life stories and our community’s story. Again, it’s each of ours to claim for ourselves as members of what gay men decades before Stonewall described as a global brotherhood of men who are rather mystically tied to one another by virtue of our “difference,” the things that make us (besides our attraction to men) gay.

How is resilience changing in LGBT history as we move forward?

The overarching theme of Stonewall Strong is that resilience has a great deal to do with how we frame our story—as individuals and as a community. We choose whether to be resilient or not; it doesn’t just happen, and we are not born resilient.

We make choices about the messages we give ourselves. You can either tell yourself, “I have been a victor over really difficult circumstances in my life,” or “I am a victim of life, the world is against me, it’s not fair.”

While we have pushed off some of the shackles of the old oppressions, at least in terms of making progress on the legal and political fronts, it’s important to remember that the most damaging oppression comes from the negative, hurtful messages we internalize from those who judge and stigmatize us—whether because of our “different” sexual orientation or because we live with HIV.

Reframing our story in a way that makes us the hero rather than the victim is the key to silencing the shaming voices in our own minds and to claim our full equality and humanity for ourselves, regardless of what anyone else might think of us.