POZ blogger Paul Kawata is the HIV-negative executive director of the National Minority AIDS Council (NMAC). In this edited excerpt from his blog post titled “Remembering NAPWA,” he looks back at early advocates of the fight.

In the early days, death from HIV was quick and ugly. Funeral directors would refuse to cremate our dead; hospital staff would not bring food into a room; some friends would turn their backs on us because of fear. As a result, the continuum of care model was developed by us to take care of our friends.

There were heroes who fought the discrimination, stigma and lies. The HIV community owes a great debt to our straight allies and the lesbian community. This epidemic was and is the test of a generation: Stand up and be counted or run away and hide?

The National Association of People With AIDS (NAPWA), the first national organization representing HIV-positive people, has closed. We can point fingers or cast blame, but right now I want to remember those who started it. NAPWA’s first executive director was Stephen Beck, then Mike Meridian, Bill Freeman, Terri Anderson, Cornelius Baker and Frank Oldham. Ordinary Americans who stood up to be counted.

I was lucky so many early heroes took me under their wings. I learned to fight from Michael Hirsch, to show compassion from Bobby Campbell, to run a group from Richard Dunne, and to dream from my friend Paul. Many survivors have their own Michaels—that friend who gave them courage to do things they never could have imagined. 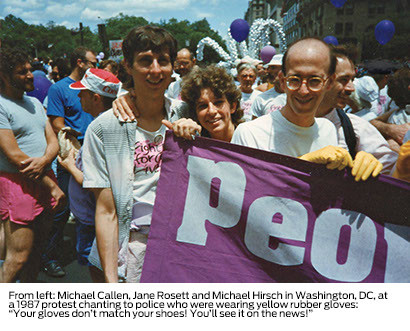 This is my story about Michael Hirsch. He was the first person to take me under his wing when I came to Washington, DC. He was the quintessential New York Jewish gay activist. He founded Body Positive and was the first executive director of the People With AIDS (PWA) Coalition. He could drive me crazy, make me angrier than I thought possible, and make me laugh until I cried.

He would infuse during meetings. He wanted to remind the world that HIV was about real people with real problems. Because of Michael I was accepted into the PWA community. He insisted I attend early organizing meetings that later became NAPWA.

Michael wrote long diatribes about life, the movement, his frustrations and joy. They were intimate letters between someone who was dying and someone who would remember. He closed each letter with “Yours in the struggle.”

In 1989 I got the call—if you did AIDS work in the 1980s or early ’90s, you know which call I mean—to come to the hospital for Michael. I traveled to New York City from DC as quickly as I could. When I rushed into St. Vincent’s Hospital, Michael’s mother and sister were sobbing. My heart sank. Was I too late? Then Rona Affoumado, former executive director of the Callen-Lorde Community Health Center, said, “Oh God, you made it. The family just decided to pull the plug.” I wasn’t too late.

Rona escorted me into his room. It was all pumps and whistles from the many machines keeping him alive. It had the smell of death. He was unconscious. The morphine stopped the pain so he could sleep. When they turned off the machines, there was an eerie silence. I held his hand and told him how much I loved him. His eyes opened, a tear rolled down his cheek, and he was gone.

The nurse later said it was a reflex; to me it was a sign. It was Michael saying good-bye. I close all of my emails with “Yours in the struggle” to honor his life and the lives of so many we’ve lost.

Michael’s story is the story of our movement. The dream of an AIDS-free generation cannot happen without leadership from people with HIV/AIDS. All of us fighting to end this epidemic must work to ensure that people with HIV/AIDS are front and center in the fight. We must never lose sight of the fact that our fight is more than a battle against some abstract disease—it’s a struggle for our friends and lovers.

Good-bye NAPWA. I will remember your history, your legacy and the leaders who made it possible.