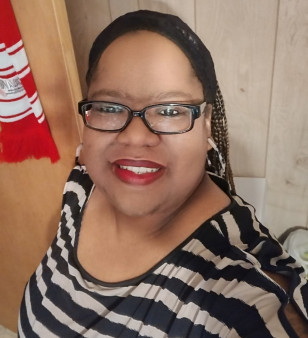 I’m Lashanda Salinas, and I’m an HIV advocate. When I was 25 years old, I was in a relationship with a guy for about a year, and when we decided to break up, it was mutual. But after we broke up, he contacted the police and filed a report saying that I didn’t tell him that I was HIV positive. I think he did this for revenge, because he knew my HIV status, I was receiving HIV care and he never tested positive.

The police came to my job and arrested me. When I was charged with this crime, I was devastated! Being in jail, having a $100,000 bond and being accused of a crime that I did not commit was the most terrifying time of my life. I had no one to bail me out, and my father was in the hospital dying of brain cancer. I did not know what to do, and I was scared.

At the time, I only had a high school diploma and my job as a hotel front desk clerk, so I could not afford to hire an attorney, and there was no way I could afford a $100,000 bond. I kept thinking, How did this happen to me? I was in jail, and I was lost. I had to call my mother while she was at the hospital with my dying father to tell her, “Mother, I am in jail because my ex-boyfriend filed charges against me claiming that I didn’t tell him about my HIV diagnosis.”

I was appointed a public defender who really worked on my behalf. She came to me with two plea deals: 1) a three-year prison sentence in which I would spend 18 months in prison and a year and half on probation; 2) three years on probation, which meant I would get out of jail that day. I took the latter deal because my father passed away while I was in jail.

When I got out of jail, I was able to attend my father’s funeral the following day. I had to report to my assigned probation officer within 24 hours. After I saw her, she told me to come back in a month. Since I was living in another city, I had to get my probation transferred. While I was at work, I got a phone call from my new probation officer, and she told me that I had to register as a sex offender. My world stopped.

To me, and to most people I know, a sex offender means that someone sexually abused children (a pedophile). I was horrified! I had never ever touched a child!

I was never informed that if I pled guilty to the charges against me, I would be considered a sex offender for the remainder of my life! If I was told about the lifetime sex offender registration, I would have fought the charges.

Since I registered as a sex offender, I have to follow certain rules and requirements. I have to take classes for sex offenders. I have to pay a $150 fee once a year, which I cannot afford. I can’t be around any kids, and I can’t be within 1,000 feet of a school, daycare or anywhere children will be. When I see a child in a grocery store, I have to go in the opposite direction. I would love to go to a football game and watch my cousin play. He is going to be a senior this year, and I want to go to his graduation and see him walk across that stage.

We got into a physical altercation, and I pressed charges against him for domestic violence. When it was time to go to court, I brought along the signed paper just in case my HIV status came up. When my partner mentioned that I was HIV positive and that I was on the sex offender registry, the judge asked him if I’d told him I was HIV positive. I showed the judge the paper he’d signed, but he told the judge he didn’t sign it. The judge asked for his driver’s license to see if the signature matched. According to the judge it didn’t, and they threw the paper out of court. I could have been charged with criminal exposure to HIV again! A person doesn’t have to produce any evidence—or have HIV transmitted—to claim that someone did not disclose, and evidence of disclosure is not always admitted in court.

Being charged with criminal exposure to HIV and being on the sex offender registry has been a nightmare for me. I want to wake up from this bad dream and have my life be normal again. But my life and the lives of other women and people living with HIV in Tennessee will never be the same until this unjust law is changed. I just want to live a normal healthy life. I am asking for help to do that by modernizing Tennessee’s HIV criminal laws.

My greatest achievement is finding the courage to share my story and becoming an advocate.

Wondering if I am I fighting hard enough.

To find a cure.

What person(s) in the HIV community do you most admire?

That people are scared to use their voice and are afraid to let people know they are HIV positive.

My laptop so that I can continue my work.