Pneumocystis pneumonia (PCP) is a life-threatening lung disease caused by a yeast-like fungus called Pneumocystis jiroveci (previously believed to be Pneumocystis carinii). The infection causes inflammation and fluid to build up, which causes the pneumonia. Though it’s rare, other body parts can be infected as well, including the skin, lymph nodes and spleen.

P. jiroveci can be readily found in the environment, so most people are regularly exposed to it. PCP rarely causes disease in people with healthy immune systems. Therefore, people with compromised immune systems—such as people with AIDS and those taking chemotherapy for cancer—are much more susceptible to PCP as their antibody responses to the organism fade.

During the early years of the AIDS epidemic, PCP occurred in more than 4 out of 5 people living with HIV. It was also highly fatal. However, drugs to prevent and treat PCP have drastically decreased these rates. Should your CD4 count near or drop below 200 or your CD4 percentage goes below 14 percent, then starting PCP drugs is important to prevent the disease from occurring.

Fever is a main symptom of PCP, along with shortness of breath, tightness in the chest, weight loss, or general sense of illness. A dry cough that doesn’t produce any mucous is also common. Fatigue and night sweats can also occur. Since these are also symptoms of other conditions, it is important to diagnose PCP carefully.

There is no reliable blood test to detect PCP in the body. X-rays can been used to tell how much fluid has collected in the lungs or even the presence of another infection, but they should not be used alone to diagnose PCP. The only way to accurately diagnose PCP is to take a sample of fluid and/or tissue from the lungs through procedures including bronchoscopy, transbronchial biopsy or open lung biopsy.

How is PCP treated?

The most effective treatment for PCP is TMP-SMX (Bactrim, Sulfatrim, Cotrim), which is a combination of two drugs: trimethoprim and sulfamethoxazole. They can be taken either by mouth or by intravenous infusion. People with moderate-to-severe PCP should also begin taking a corticosteroid (prednisone, etc.) within 72 hours of starting TMP-SMX. This is to reduce additional inflammation that may occur during the start of treatment.

Many people are sensitive to or allergic to the sulfur in sulfamethoxazole. Serious side effects include fever and rash. Those who cannot tolerate SMX will likely switch to a different drug or regimen for treatment.

For those who cannot tolerate SMX, the following can be prescribed. Some are given intravenously while others have a higher daily pill count. Some have fewer side effects compared to TMP-SMX.

Can PCP be prevented?

Yes. People who should consider starting preventive treatment (including pregnant women) are those whose CD4 counts are below 200 or whose CD4 percentage is below 14 percent. PCP prevention may also help those with 200–250 CD4 cells who have not started HIV treatment. If someone is already taking pyrimethamine-sulfadiazine for toxoplasmosis, they do not need to start PCP preventive drugs.

As discussed above, many people have a hard time handling TMP-SMX due to allergic reactions. In this case a person can switch to another preventive regimen (discussed below) or undergo a process called desensitization which teaches your body to get used to the drugs. Here, your doctor starts you on a smaller dose and increases it gradually over time. Nearly 3 out of 4 people can restart TMP-SMX this way. However, if a life-threatening reaction or Stephens-Johnson syndrome had occurred the first time on SMX, then desensitization should not be attempted.

If a different preventive regimen is needed, four options are possible: 1) aerosolized pentamidine with Respirgard II nebulizer, 2) dapsone, 3) dapsone + pyrimethamine + leucovorin, and 4) atovaquone (Mepron). Discuss the pros and cons with the various dosing schedules; pills, inhaler or liquid; and side effects of these regimens with your doctor.

For people living with HIV whose CD4 counts increased and stayed above 200 after starting HIV treatment, it’s very possible to stop their PCP preventive regimen. If the CD4 count falls below 200 again, PCP prevention should be restarted.

If you would like to find out if you are eligible for any clinical trials that include new therapies for the treatment or prevention of PCP, visit ClinicalTrials.gov, a site run by the U.S. National Institutes of Health. The site has information about all HIV-related clinical studies in the United States. For more info, you can call their toll-free number at 1-800-HIV-0440 (1-800-448-0440) or email contactus@aidsinfo.nih.gov. 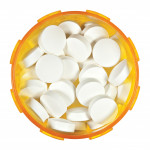