In order for your health care team to know how best to care for you and your HIV infection, blood tests are done on a regular basis—about every three or six months, depending on your current state of health. This will help you closely monitor your health and any possible damage that HIV or the drugs you’re taking might cause.


A CD4 cell is a type of white blood cell in your immune system. About 15–40% of all white blood cells are CD4 cells. (The percentage can vary from person to person due to genetic reasons or active infections.) CD4 cells protect you from viral infections; help other cells fight bacterial and fungal infections; produce antibodies; fight cancers; and coordinate the activities of other cells in the immune system.

HIV prefers to target CD4 cells in order to reproduce, which can cause their number to decrease over time. Too few CD4 cells means that the immune system will no longer function like it is supposed to.

You can look at white blood cells as two main types: B cells and T cells. Both are made in your bone marrow, but B cells stay there to mature while T cells move the thymus to mature. B cells produce antibodies, which help your body destroy abnormal cells and harmful micro-organisms, such as bacteria, viruses, and fungi.

T-cells are divided into three groups:

By getting regular CD4 counts done, you will know how many CD4 cells you have, how healthy your immune system is, and how well it is fighting HIV. Your CD4 cell count will also be helpful in figuring out when to start HIV meds and whether or not you should take medications to prevent AIDS-related infections.

The following is what a lab report could look like for CD4s, etc. The numbers represent the amounts found in a small drop of blood called a cubic millimeter. You will also usually see a range of numbers listed for each test result, so you can compare your numbers to what is the normal range for most HIV-negative people. 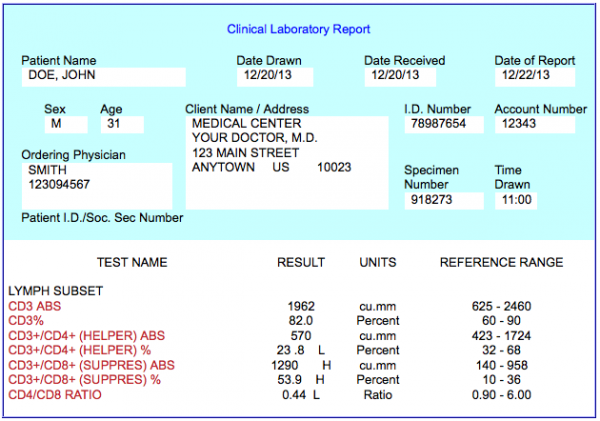 This represents the number of all T cells, which includes CD4 and CD8 cells. This figure is rarely used in making treatment decisions.
CD3 Percentage

This represents the group of all immune cells that are T cells. This figure is rarely used in making treatment decisions.
CD4 Cell Count

This is the number of all CD4 cells. The normal range for an HIV-negative person is 500–1,500. The goal of HIV treatment is to keep this number as high as possible for as long as possible. A CD4 count below 200 raises the risk for opportunistic infections.
CD4 Percentage

This represents the group of all T cells that are CD4 cells. The normal percent for an HIV-negative person is 40% while the average for people with HIV is 25%. An AIDS diagnosis can be made when it’s below 14%. The CD4 percentage is sometimes more reliable because it tends to vary less between measurements than the CD4 count.
CD8 Cell Count

This is the number of all CD8 cells, and includes both Suppressor and Killer T cells. The normal range for an HIV-negative person is 150–1,000, though it’s normally higher in a person with HIV. This figure is rarely used in making treatment decisions.
CD8 Percentage

This represents the group of all T cells that are CD8 cells. The CD8 percentage is sometimes more reliable because it tends to vary less between measurements than the CD8 count.
CD4/CD8 Ratio (helper cell/suppressor cell ration)

This number is the CD4 count divided by the CD8 count. The normal range for an HIV-negative person is 0.9–6.0, which means 1–6 CD4 cells for every 1 CD8 cell. In people with HIV, this figure is usually inversed because there are more CD8 cells, more commonly 2 CD8s for every 1 CD4. It’s normal to see numbers below 1.0 for the CD4/CD8 ratio. This figure is used less often when making treatment decisions.

This test measures the number of copies of HIV. It is sometimes called an HIV RNA or PCR or bDNA test. There is no normal range of viral load since the point of HIV treatment is to keep HIV as low as possible for as long as possible.

Various viral loads tests are used in the U.S. and usually count down to 50 copies and sometimes 20, but no lower. If your result comes back “not detected” or “undetectable” then that means HIV is there at an extremely low level—a very good result. Otherwise, if there’s a number for the viral load, then that’s the number of copies of HIV the test counted in that drop of blood.

Viral loads are used to see how well HIV treatment is working, whether it’s starting a first regimen or when switching to a new medication or regimen. Before starting treatment, a viral load above 100,000 copies means certain HIV medicines should not be used. If it’s below 100,000, then a person has more options for starting treatment. Read the federal HIV Treatment Guidelines for more details.

After being on treatment, if viral load becomes detectable, then it may be a sign of adherence issues, an occasional “blip”, unknown drug interactions, or the development of resistance. If one viral load comes back at a low detectable level, it could be a blip. This could mean an error was made in the lab or there’s another infection present. This is usually nothing to worry about.

However, if a trend of increasing viral loads occurs over time, then it could mean that adherence or getting refills is an issue. It could also mean that a drug interaction is preventing the HIV meds from fully controlling the virus. In any case, this should be discussed and resolved with your provider.

Increasing viral load over time can also mean that resistance has developed. Here, it’s important to get a genotypic resistance test done (best when viral load is at least 1,000 copies). If resistance is detected, then one or more drugs in the regimen should be switched to drugs that can fully suppress HIV. 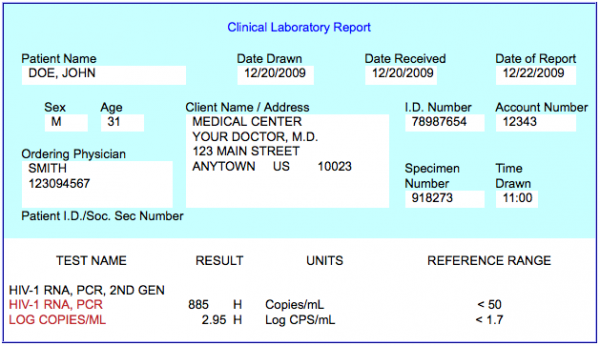 This is the number of copies of HIV found by the test. To break down the words on the lab report, if it says “HIV-1” then that simply means it’s the most common type of HIV seen in the U.S. (HIV-2 is usually found in West and Central Africa-.) “RNA” refers to HIV’s genetic material, which is what the test looks for. “PCR” is one type of viral load test (brand name Amplicor). “bDNA” is the other type of test (brand name Quantiplex).
Log Copies/ML

A chem screen reports the amounts of various chemicals that are produced by your body to help it function properly. While it won’t really tell you much about HIV or how your immune system is doing, it can help you and your doctor know if another infection is present or if you’re having any side effects to the drugs you’re taking. 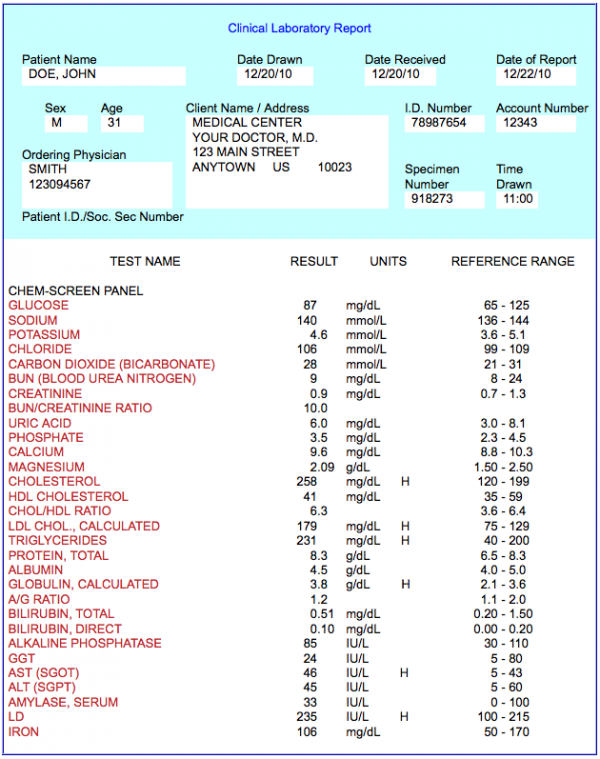 One of the most important blood tests that your doctor will order for you is called a complete blood count, or CBC. All the different types of cells in your blood can all be grouped into one of three categories: red blood cells, white blood cells, or platelets. Knowing how many of these cells you have in a blood sample provides a lot of valuable information.

*NOTE: Reference Ranges shown below are for adult males. Some may vary slightly for women, children and adolescents. Check your lab report for specific reference ranges. 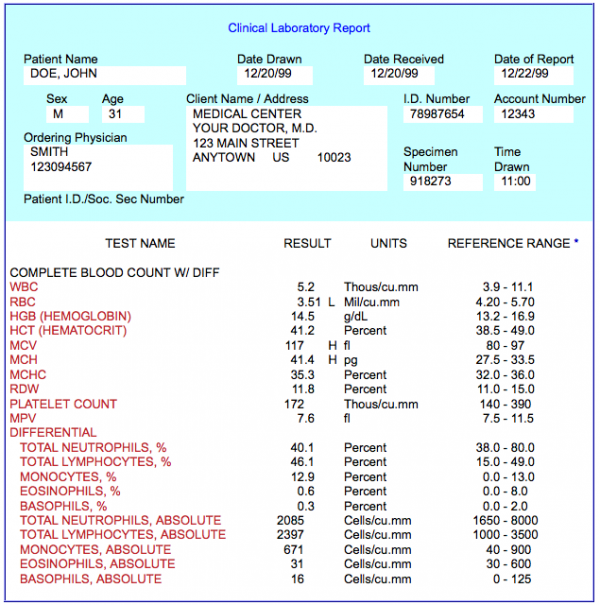 White blood cells (leukocytes) are produced by the immune system to help defend the body against infections. They are formed in bone marrow and either enter the blood or migrate to key organs such as the spleen, lymph nodes, or gut. A high WBC count likely indicates that an infection is present somewhere in the body, while a low number might indicate that an infection or disease—such as HIV or cancer—has slowed the bone marrow’s ability to produce new WBCs.

Red blood cells (erythrocytes) are responsible for delivering oxygen throughout the body. There are between 3.6 to 6.1 million in a single milliliter of blood. A low red blood cell count can indicate anemia, which can lead to fatigue. Some older HIV meds can cause anemia, as can some AIDS-related infections and cancers.

Since red blood cells can come in different sizes, RDW looks at the range of these sizes in a blood sample. If anemia is suspected, RDW test results are often used together with MCV to figure out what the cause of the anemia might be.

Platelets are tiny cells produced by the bone marrow that help your blood to clot in the event of a cut or scrape. A high number might be seen in people with cancer, a blood disease, or rheumatoid arthritis. A decreased platelet count, called thrombocytopenia, can cause bruising, bleeding and slow blood clotting. While HIV treatment can help reverse this condition, it can sometimes cause platelet levels to rise, which increases the risk of blood clots. It’s important to know the underlying reason that’s causing these conditions in order to correct them.