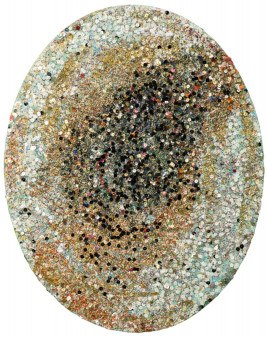 Blurry Self Portraits: The Expanse and the Body in ’80s Gay Art

Visual AIDS’ March Web Gallery is curated by the nephew of Gustavo Ojeda, an artist who died from AIDS-related complications in 1989.

Blurry Self Portraits explores the idea of the expanse, the body, and their mutual transposition in artwork of the gay ’80s. That is to say, this collection of images is meant to display both the corporealization of the landscape/architecture and the spatialization of the body in ’80s art by people living with HIV and AIDS. I’ve lifted the title of this web gallery from Arch Connelly’s surreal, gaudy, and glamorous work, where the body is reduced to and expanded by its ornamentation; pearls, sequins, and fake jewels arranged into miniature oceans stand in for the human form. All of the artists here use the landscape’s representational expanse to conjure the bodies absent from it. When bodies do appear, they are represented with the techniques and visual frame of landscape and architectural art.

I think of the expanse as a tender and anxious representational space, something captured and yet uncapturable. The expanse is both the glimmering possibility of an elsewhere and the unpredictable danger of a “here be dragons.” The expanse is the “-scape” writ large. And so, to bring the mode of the expanse to bear on depicting the body means to lend both tender care and anxious suspicion to the body’s sweeps of flesh. In the inverse, the corporealization of the landscape summons notions of shape, intimacy, population, flesh, and erotics to contour the vastness of the expanse.

This gallery is inspired by the artist Gustavo Ojeda, who was well-known in the 1980s for his impressionistic urban nightscapes, but whose work fell into obscurity after his death from AIDS-related complications in 1989. Gustavo was my uncle. I’ve worked in recent years, with the enduring support of Visual AIDS, to bring renewed attention to his body of work. The major event in this revitalization, thus far, has been the publication of An Excess of Quiet: Selected Sketches by Gustavo Ojeda, 1979-1989, co-edited by myself and Erich Kessel Jr, published by Soberscove Press last November. This web gallery is inspired by the main intervention of that book: bringing Gustavo’s private collection of corporeal and facial sketches to bear on his exhibited work in landscape art. His sketches and paintings are the foundation of this gallery’s selection and themes.

To get to this selection of artists, I chose from the vast array of artists with HIV and AIDS that Gustavo was put into relation to while he was still alive, either by group exhibition, shared publication, shared institutional space, or pure friendship. Every artist here is just one degree of separation from each other, united in their contemporary moment and reunited here and in the Artist+ Registry of Visual AIDS. So, this web gallery serves two purposes: 1) to exhibit some of the dialogue between corporeal and landscape figuration in gay ’80s art, and 2) to reconstruct a social circle, a minor canon, a working group of peers from that historical moment. I cannot ensure that all of these people liked each other, or were all influenced by each other, but they all once shared various spaces together, and now do so again. The primary pillars of this gallery are the work of Gustavo Ojeda, Luis Frangella, Arch Connelly, and Craig Coleman. Their work is expanded, supported, complicated, and enriched by the art of Roger Brown, Tom Bianchi, Scott Burton, Huck Snyder, Keith Haring, David Wojnarowicz, Nicolas Moufarrege, and Felix Gonzalez-Torres.

Here’s a selection from the web gallery:

Gabriel Ojeda-Sagué is a poet and scholar living in Chicago. He is the author of three books of poetry, including most recently Losing Miami (The Accomplices, 2019) which was nominated for the Lambda Literary Award in Gay Poetry. He is also the co-editor of An Excess of Quiet: Selected Sketches by Gustavo Ojeda, 1979-1989, published by Soberscove Press in 2020. He is currently a PhD student in English at the University of Chicago where he works in the study of sexuality.