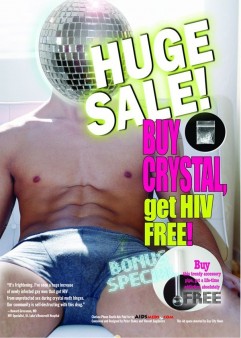 A version of the ad above appeared on Verizon phone booths in the Chelsea neighborhood of New York City during the month of January, 2004. They were conceived and designed by myself and Vincent Gagliostro (one of ACT UP’s renowned graphic artists).

Why? I’m a recovering crystal meth addict and long-term AIDS activist in New York City.  I’m saddened and angry about what meth is doing to my community. Meth is playing a significant role in the rise of HIV and syphilis infections among gay men in many cities around the U.S. (many gay men that use meth have extended sex & drug binges that involve barebacking).  Meth is destroying many wonderful people all around me when they become addicted.

There was very little discussion or press about this in New York at the time, and neither the health department or AIDS service organizations were doing or saying much about it.  It was a whispered about epidemic.

The ads were my personal response to all of this.  They were NOT meant to be educational.  They were a political act.

They were meant to provoke discussion and ultimately action by others. Please email your comments to editors@aidsmeds.com, and feel free to copy and distribute the ads below.

The ads, along with the issues they raised, became a major news story, and the city’s health officials, AIDS organizations, and political leaders began to respond. I went on to co-found the Crystal Meth Working Group, which creates meth prevention campaigns like the ones you see in the slideshow below.

To learn more about crystal meth, check out crystalneon.org or tweaker.org. To find a 12-step program in your area, go to the Crystal Meth Anonymous website.

This blog entry originally appeared as a page on aidsmeds.com site in 2004.