A Little Smaller Without Her 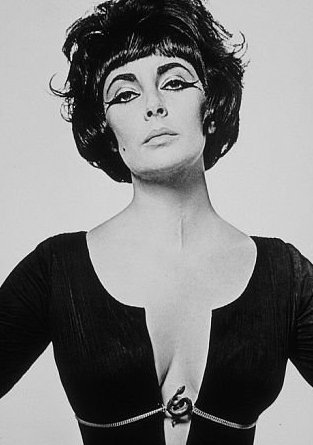 This is one of my favorite photographs of Elizabeth Taylor. It’s from the CLEOPATRA period, and if you look closely, just above that magnificent cleavage, you can see that she’s tilting her head back slightly, almost defiant, to show off the scar from her famous tracheotomy. This was a woman who wasn’t afraid of her scars.

My first job in New York was with amfAR, The Foundation for AIDS Research, which Elizabeth co-founded, and for which she served for many years as the National Chairman (as I recall, she insisted on being the Chairman, as opposed to the Chairperson or Chairwoman).

I used to listen to her on conference calls with the Board of Directors, and marvel that I had come so close to one of the century’s great stars and humanitarians.

Later, I would meet her several times, and since my friend Sally coordinated her AIDS work, I would be in her orbit for many years. She was gracious, funny, kind, impulsive, always late, had a sharp (and often dirty) sense of humor, and an unfailing theatricality that served her marvelously over the years.

My friend Richard Pérez-Feria tells of interviewing her in Los Angeles, and “she turned to me as I left the spirited chat and said: ’It all matters, Richard. All of it.’” That, in a nutshell, was Elizabeth.

It’s true that sometimes she lived in her own world -- “The thing you must remember about Elizabeth,” my friend Dennis once told me, “is that she’s been Elizabeth Taylor since she was fourteen years old” -- but her world was kind of a marvelous place to live.

It was a world in which it mattered that one put one’s mink false eyelashes on one at a time, rather than in one long strip. It mattered that one spoke kindly to strangers, and carried a beloved dog everywhere one went, even if it meant involving the American Ambassador to bypass animal quarantine laws.