One of the iconic images in “Elizabeth Taylor: Actress to Activist” Courtesy of ETAF

Twitter
Facebook
Pinterest
Tumblr
Email
Advertisement
The loss of Dame Elizabeth Taylor is a deeply sad moment for the world, especially for those whose lives have been touched by Taylor’s heroic fight against HIV/AIDS. Her grace, beauty, courage and compassion will be dearly missed. She passed from this world at the age of 79, every bit as beautiful--inside and out--as she was when her gorgeous visage first ignited the Silver Screen.

I was introduced to the idea of Elizabeth Taylor sometime in the late 70s by “National Velvet,” a movie (made in 1944) about a young girl who trains an unruly horse for the Grand National--England’s most daunting steeplechase race. I watched the movie on my hands and knees, leaning into the TV to drink in Taylor’s rogue beauty which matched that of her untamed horse. Like her hard-to-handle mount, she had a dark, long mane, eyes that flashed defiantly when told “no” and a spirited determination that riveted and inspired me. At the time, I was an awkward young Pony Clubber with bangs, braces and aspirations way beyond the abilities of my fat, slow, prone-to-stop-and-eat-the-grass pony. 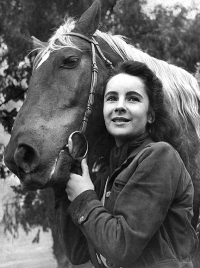 The next time I focused intently on Taylor was in the early 80s when she spoke up about HIV in the aftermath of the death of her close friend Rock Hudson, who died of AIDS. Taylor was among the first A-list celebrities to publicly embrace the fight against HIV--and those living with the virus. Many people I knew had fallen sick and were dying. I was struck by her courage to speak “AIDS”--a word few others, including then-President Ronald Reagan--dared utter.

Taylor is famous for saying: “Celebrity is not something that comes without responsibility.” She embodied that maxim perfectly, always using her position in the spotlight to help those in need, particularly people living with HIV. While others may have worried what talk of AIDS would do to their reputations, or their careers, Taylor started (and never stopped leading) an international conversation about the pandemic.

She leveraged her beauty, and the power that came with it, to save people’s lives. She was a woman with a fiery tongue and a tendency to push back, albeit always graciously, against those who misunderstood or missed the boat about HIV/AIDS. Her boldness and conviction that we must address the AIDS crisis openly echoed the flavor of the irrepressible character she played in “National Velvet.” She was a woman ready to grab the reins and direct sometimes unwilling forces to point them in the right direction.

She remembers her birth as an AIDS activist thus (an excerpt from her bio on the Foundation for AIDS Research’s website, amfar.org),“I kept seeing all these news reports on this new disease and kept asking myself why no one was doing anything. And then I realized that I was just like them. I wasn’t doing anything to help.”

AmfAR recounts her involvement in this way: “Appalled by both the suffering [Rock Hudson] experienced and the cruel and gratuitous condemnation that befell so many of those affected by the disease, Ms. Taylor determined to speak out against hypocrisy and discrimination and for compassion and care. Ever since, she has lent her voice--and indeed her heart and soul--to the fight against HIV and AIDS. In 1985, Ms. Taylor joined with Dr. Mathilde Krim and a small group of physicians and scientists to form the American Foundation for AIDS Research (amfAR). As amfAR’s Founding National Chairman, she became the new organization’s principal spokesperson and titular head. [Her most recent title was ”Founding International Chairman.“] As a great star and beloved public figure, she attracted enormous media attention. As a woman and a mother, her voice touched millions of hearts and minds. Indeed, for many Americans, it was Elizabeth Taylor who brought the issue of HIV/AIDS into the mainstream.”

In a statement released today, Dr. Krim said, “I am personally deeply saddened at the passing of Dame Elizabeth Taylor. Dame Elizabeth’s voice was among a very small number to be heard on the subject of AIDS in the early days of the epidemic. Her celebrity helped open doors that were slammed in the face of others. But it was her humanity and compassion for the suffering of others and her fierce opposition to bigotry and discrimination that were at the heart of her unswerving commitment to the fight against AIDS. She was a towering champion of the rights of people living with HIV/AIDS. Her personal contributions to amfAR and AIDS research were generous and innumerable. I’m privileged to have fought side by side with Dame Elizabeth in the struggle against the deadly epidemic of HIV/AIDS. I join with everyone at amfAR in extending my profound sympathy to all the members of Dame Elizabeth’s family.”

Taylor appeared in amfAR-produced TV commercials and spoke all over the world on behalf of amfAR, raising money, and awareness, about HIV/AIDS. She stood on Capitol Hill to convince Congress that the Senate should support the Ryan White CARE Act. She traveled the globe, tiny pup in hand, to spread her messages of hope and compassion and to rail against government negligence. 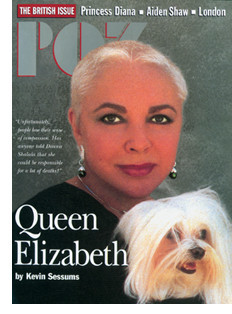 She founded The Elizabeth Taylor AIDS Foundation in 1991. The Foundation was created to support the provision of direct AIDS services and complement the research, education, and advocacy programs funded by amfAR.

Taylor even donated the clothes off her back to raise money for HIV. According to amfAR the dress she wore to present the Oscar for Best Picture in 1969 was auctioned for a record $167,500, second in value only to a Princess Diana dress auctioned in London in 1995.

Speaking of Princess Diana, in 1997 when working on a special British edition of POZ, our editors (including guest editor Aidan Shaw) discussed whether the Princess of Wales or Elizabeth Taylor--both incredible AIDS warriors--should grace the cover. Upon learning that POZ would have a chance to speak directly to Taylor, the decision was made. (Read about that moment in POZ founder Sean Strub’s blog.) Dame Elizabeth Taylor was the first person without HIV to appear on POZ’s cover. The November 1997 issue of POZ which highlighted Princess Diana’s incredible generosity to people with HIV (a Christie’s auction of dresses worn by the princess garnered $3.25 million for AIDS and cancer charities), also reported Princess Diana’s tragic death.

It is always disheartening when a wonderful, generous, vibrant person leaves us. But great people leave behind great legacies that allow those who survive to carry on their work.

Though the remarkable Dame Elizabeth Taylor is gone, her work will continue through amfAR’s incredible efforts (for purposes of disclosure, I share that I am an amfAR board member). And Taylor’s words and presence will long resonate among all those whose lives she touched and whose minds she opened and changed when she taught people that it was safe to wrap one’s arms around people living with HIV.

Unfortunately, I never had the honor of meeting Dame Elizabeth Taylor. I would have liked to have thanked her personally for helping to spare my life, and the lives of so many others, with her tireless, relentless advocacy.

I hope Dame Elizabeth Taylor rests in peace in a heaven dazzling with diamonds (she once said, “If I’m going to be sick, then I’m going to have a gorgeous bedroom”). Thanks to our Queen Elizabeth, many of us may live to see the end of AIDS in our lifetimes. As we continue the fight, let’s harness the strength and fearlessness displayed in Taylor’s unstoppable character in “National Velvet” and in arguably her most important off-screen role: a woman who used her fame to help secure health and human rights for people some would have been otherwise all too glad to ignore. She has handed us the reins. May our Queen live on through all of those of us she has saved.