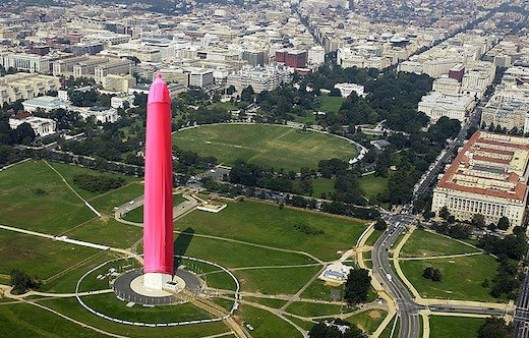 What If This Ginormous Pink Condom Greets Lawmakers in DC?

Picture it: Newly elected members of Congress set out for their first session at our nation’s capital, ready to roll up their sleeves and get to work. Naturally, for the Republican majority, this entails impeaching Obama, outlawing abortion and rolling back marriage equality. But when they arrive on the Hill, the lawmakers find the cultural shock of a lifetime--a ginormous pink condom covers all 555 feet of the Washington Monument. Stenciled in large lettering across the rubber is the message: PROTECT THIS COUNTRY!

To their horror, lawmakers soon realize that health advocates have rallied the American people around a unified cause. Left with no other choice, the 114th U.S. Congress passes a string of related laws: Evidence-based sex education is taught in all schools! Access to birth control and abortion is guaranteed! Universal health insurance is offered to all! Everyone who’s HIV positive can afford meds. Stigma diminishes, and thanks to new funding for research, HIV is cured!


Well, one can dream. This particular fantasy was inspired not just by the recent midterm elections, but also by the real-life headline-grabbing, condom-covering actions of two different HIV groups.

First, the AIDS Council of New South Wales (ACON) in Sydney, Australia, recently placed a 60-foot pink prophylactic on an obelisk in Hyde Park as a way to promote condom use among gay men.

(Side note: In terms of HIV prevention, “safe sex” or “protected sex” in the United States can now include condomless sex, thanks to Truvada as pre-exposure prophylaxis, but no drugs have been approved for PrEP in Australia. Regardless of the country, we could always use a thoughtful reminder about rubbers.) 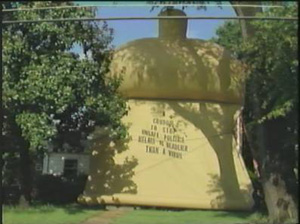 The other famous condom action took place stateside, back in 1991, when a group of activists put a giant rubber over the house of homophobic Senator Jesse Helms, who was notorious for stoking AIDS fears across the nation. Read all about it--and watch footage--in this first-person account by fellow POZ blogger Peter Staley. I hope it inspires you too.

And remember: The 114th U.S. Congress doesn’t meet until January. That’s plenty of time to make a 555-foot condom.

Supply of Our HIV and Hepatitis Meds Is Secure, Says Gilead

HIV Prevention PrEP to Be Readily Available in England (Finally)