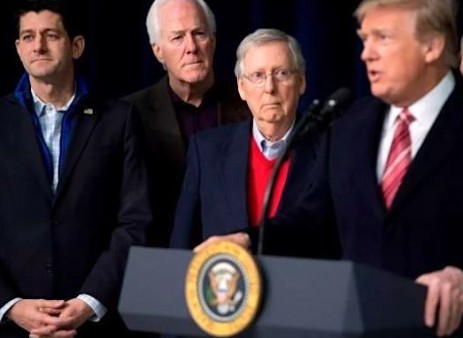 How a Government Shutdown Could Affect People With HIV

The CDC would keep fewer than 40 percent on employers on the job—and this is during a deadly flu outbreak.

For the fourth time in as many months, Congress is in danger of failing to fund the federal government and once again finds itself standing on the precipice of a government shutdown. In the previous three instances, the Republican leadership in the House and Senate have won the support of their GOP colleagues and a smattering of Democrats by pushing short-term funding extensions designed to keep the government open long enough to negotiate a year-long spending package. However, after watching GOP leadership repeatedly kick the budgetary can down the road and after a disastrous meeting on immigration with President Trump last week, Senate Democrats and a few Senate Republicans appear poised to say enough.

When the Senate adjourned late Thursday night, January 18, there did not appear to be any clear path to averting a government shutdown. By that point, at least 39 Senate Democrats and 2 Senate Republicans had said that they would not vote for the House-passed 4-week continuing resolution that would fund the federal government through February 16th. However, the resolution does not address Democratic priorities including protections for the undocumented immigrants who were brought to the United States as children known as “dreamers,” and it neglects funding for disaster relief, the opioid epidemic and community health centers. The spending package almost didn’t make it to the Senate, passing mostly along party lines after members of the right-wing Freedom Caucus extracted concessions from President Trump and House GOP leadership around increased defense spending and immigration.

Should Congress fail to avert a government shutdown, the impact on people living with and impacted by HIV may be substantial. Once the shutdown begins, hundreds of thousands of federal workers will be furloughed and unable to work on their ongoing projects. According to a Department of Health and Human Services (HHS) contingency plan from Fiscal Year (FY) 2017, approximately half of the department’s 82,000 staff would be furloughed, leaving many agencies dangerously understaffed.

The Centers for Disease Control and Prevention (CDC) would likely keep fewer than 40% of employees on the job while the National Institutes of Health (NIH) and Substance Abuse and Mental Health Service Administration would keep roughly 25% and 10% of their employees respectively. During the last government shutdown in 2013, this short staffing led to the shutdown of new HIV-related clinical trials at NIH, halted disease outbreak monitoring at the federal level, impeded work to address the opioid epidemic and shut down most of the CDC’s seasonal influenza program. Similar results this year would be worrying given that the U.S. is enduring a particularly strong flu season that poses significant risks to people living with HIV, especially those who are 65 or older.

There is still time for Congress to work out a spending agreement before the government runs out of money at 11:59 PM on Friday night, but prospects for a deal are looking scant. Senate Minority Leader Chuck Schumer (D-NY) and Senate Democrats have said they are open to a several-day extension that would allow for a bipartisan agreement to prevent the deportation of hundreds of thousands of immigrants to be agreed upon.

For his part, President Trump has been more hindrance than help for Congressional Republican leadership during these most recent government funding negotiations. The issues emanating from 1600 Pennsylvania Avenue began in earnest last week, when it was revealed that President Trump rejected a bipartisan immigration plan by Senators Richard Durbin (D-IL) and Lindsey Graham (R-SC) during a tense meeting with Members of Congress on immigration. During the process he referred to Haiti, El Salvador, and all African nations as “shithole countries” also scuttling any goodwill to work toward a solution. Over this past week, President Trump has largely kept his comments on immigration and the continuing resolution to Twitter, but this has not stopped him from throwing a wrench in his party’s plans on occasion. On Thursday, Trump tweeted out that “CHIP should be part of a long term solution” as opposed to a short-term spending plan, undercutting his party’s own legislative strategy of attaching the CHIP extension to the CR to attract Democratic votes.

Should the Senate fail to pass a short-term spending bill by the end of Friday, January 19, it would be the first time in modern U.S. history that a government shutdown has occurred while one party controlled The White House and both houses of Congress.