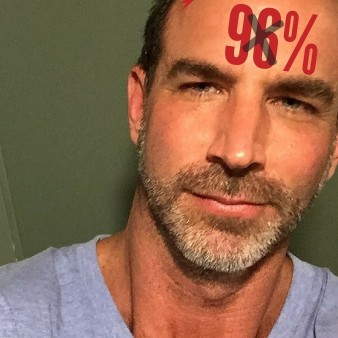 Why a 96% reduction in risk doesn’t mean you still have a 4% chance of getting HIV. And why it isn’t about being undetectable.

While people with HIV and our partners celebrate the groundswell of groundbreaking, stigma-shattering evidence proving that people with HIV with an undetectable viral load cannot transmit HIV, it can be frustrating, to say the least, when people communicate inaccurately that we’re a significant risk.

To break through thirty-five years of fear of HIV and people with HIV, we will need to learn the facts and be vigilant about communications about us. Later this month, Prevention Access Campaign will launch an Accuracy Watchdog to help, but in the meantime, here’s a widespread mistake that weighs heavily on my mind:

When you hear about the power of HIV treatment to lower transmission risk, you might hear the statistic like “lowers the risk by 96%.” That number pops up a and is very often misused.

The landmark HTPN 052 study found that people with HIV who started antiretroviral therapy (ART) early lowered their risk of transmitting the virus to their partners by 96%. This is great news. But it was not based on someone who had already achieved an undetectable viral load. The 96% is based on one transmission which researchers conclude happened around day eight of treatment from someone who would not have been undetectable. Just looking at transmission after the first six months of treatment would have meant there was a risk reduction of 100% and a transmission rate of zero![1][2][3]

Greater Than AIDS uses a number that is not only inaccurate but is also likely to be misunderstood as a much higher risk. That’s harmful!

Here’s a great example of how the number is misused:

Greater Than AIDS (GTA), one of the most influential HIV communications agencies in the U.S., made that mistake in their cutting edge #HIVBEATS video series. The Davey Wavey Undetectable  video says:

Davey Wavey: “Someone with HIV who is undetectable is significantly less likely to pass the virus on to someone else by as much 96%!”

[UPDATE: Since I posted this blog, Greater Than AIDS has removed the video.]

So, what Davey is communicating in effect is:“Someone with HIV who is undetectable is less of a risk -- that’s amazing -- but there’s still a risk!”

Actually, if Davey had an accurate script that was based on the same study that GTA sourced, he’d say that someone who has been on ART for more than six months and is undetectable is “less likely to pass the virus on to someone else by 100%!” or simply put “cannot transmit the virus!” [1][2][3]

Even if 96% were the right number, people typically don’t understand what it means to reduce the risk by 96%.

Pop Quiz (only if you want to know the math):  A man who does not have HIV is the bottom for a man who has HIV, who is on treatment, and who ejaculates in him. This is the highest level of risk.  It is not specified if the top has an undetectable viral load. How much is 96% reduction in risk?

The problem is that most people see 96% and incorrectly assume “There’s still a 4% risk!"

GTA is using a number that is not only inaccurate but is also likely to be misunderstood as a much higher risk. That’s harmful!

We’re in a war against HIV stigma.  Accurate and meaningful messaging about risk is critical to how people with HIV are perceived by others and how we perceive ourselves. Struggles for information about the “danger” we present to others are played out repeatedly in every type of sexual and non-sexual interaction with people with HIV throughout the world leaving us susceptible to all forms of harm and injustices even when there is no actual risk of transmission. Yet, because of how the media like Greater Than AIDS frames findings, people continue to think we are still a substantial risk.

Why isn’t Greater than AIDS correcting it?

Prevention Access Campaign and its founding task force member Dr. Pietro Vernazza (executive committee, PARTNER study; author Swiss statement), Simon Collins (steering committee, PARTNER study; founder HIV i-BASE) and other experts contacted GTA to address the problem. GTA responded that they are restricted to CDC sources, which was curious to us because they actually sourced the CDC incorrectly. They also responded that since most people don’t know there is ANY prevention benefit to treatment, they are confident that the 96% will serve to counter misinformation and irrational fears against people with HIV.

People with HIV and our partners deserve better.

GTA has every right to disagree with the consensus of global experts and to create a policy that restricts itself only to CDC sources and, as a result, to progress in their HIV communications at the same rate as a U.S. government bureaucracy. However, GTA has no right to knowingly publish false and misleading information that exaggerates the risk from people with HIV.

GTA’s #AskTheHIVDoc, the best online video source for HIV/AIDS medical advice, even gets it right that people with an undetectable viral load  "have a practically zero percent chance of transmitting HIV to their sexual partners” Their doctors are communicating the right message. Let’s encourage GTA to do so as well.

[UPDATE: We initially listed a call to action here to encourage GTA to update their undetectable video. GTA has since removed the video. Thank you to the folks who helped us point out the issue. We appreciate GTA’s willingness to hear our concerns.]

One more point: the GTA video focuses clearly on the prevention benefits of treatment, which extremely important, but the way it’s framed can be stigmatizing. The video’s final message sounds like people with HIV are responsible tested and get on treatment to prevent HIV. We are not simply prevention tools. I’d suggest doing a video that focuses also on how this news is also empowering to people with HIV, and how this dramatically changes our emotional, sexual and reproductive health. This news shatters stigma! We can have babies! We can have sex with our partners without anxiety and fear! The picture is bigger than prevention.

I hope this serves as a call to action to people with HIV and our allies to educate and to demand accuracy based on current science wherever we find challenges such as HIV stigma, discrimination, politics, phobias and lack of education are barriers to the truth. Science is on our side.

Based on Science Not Stigma

Check out my other blog: Loud & Clear: Undetectable = Uninfectious

And the Q&A with POZ: Does Undetectable = Uninfectious? The Challenge of Explaining HIV Study Results

[2]  “HPTN 052 study saw only cases of transmission during ART that occurred shortly (days) after the initiation of therapy. If only transmissions after the first six months of ART are considered (as stipulated in the Swiss statement) the efficacy would have been 100% with a transmission risk of zero´. http://www.smw.ch/content/smw-2016-14246/

[3] Dr. Julio Montaner’s TED Talk:  http://www.aidsvancouver.org/hiv_in_the_news   “the oft-quoted 96% reduction in transmission risk found in the HPTN 052 be 100%, as the one individual who seroconverted during the study did so before ARV treatment had a chance to come into effect.  In reality, if you give the treatment the opportunity to get on with its work, you will have zero transmission”