Twitter
Facebook
Pinterest
Tumblr
Email
Advertisement
When I turned 35 this summer, I posted a blog stating that I am officially middle-aged.  I got quite a few messages about how extended life expectancies have shifted that number, and how I’m not “officially” middle-aged yet.

I do believe that measuring age in numbers really doesn’t have anything to do with the youth of one’s spirit.  The real challenge in life is to hold onto that youthful spirit while allowing the wisdom of each year tucked under your belt to inform your decisions and make it less likely to repeat the same mistakes twice... like posting that 35 is middle-aged when you live in Virginia.

It’s cool to think that, even for a viral pinata such as myself, that 25 is not middle-aged. I can see an Old Man Decker roaming the earth in four decades and, even though my body may be rejecting the thought of once a day iced mochas by then, I’m sure the world will have plenty of delightful things to fill that void.  Either way, over the weekend, I got a glimpse into that future in the form of a bronze statue. 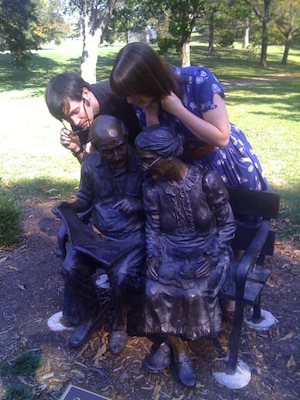 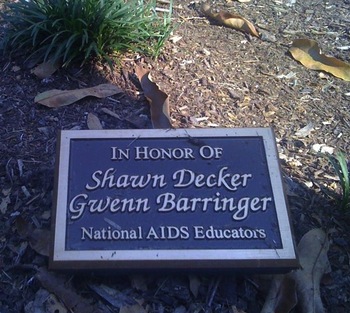 These old folks welcome visitors at the foot of Waynesboro’s Serenity Garden, which is located right behind my old stomping grounds, Westwood Elementary School.  The Serenity Garden is a place where survivors of cancer, as well as the families who those who have been lost to cancer, can go to reflect on the medical struggles and fond memories of fallen friends.  I received an email a month ago informing me that an anonymous donor dedicated a stone in my honor, and I was asked if I’d say a few words a the dedication ceremony.

So, of course, I was surprised to see the enormity of the statue!

I spoke very briefly about the commonality of facing medical adversity, whether it’s hemophilia, HIV, cancer- anything that disrupts one’s life and forces someone to either draw on the reserves of the human spirit or attempt to run like hell in the other direction.  None of it is easy, but I did speak to the fact that those of us who are misfortunate enough to find ourselves in that spot, while also having the incredible luck to have a support system of people who give a damn... well, it is incredibly special to see that side of humanity.

On a personal note, it was kind of cool to be so close to Westwood Elementary School, a place where I literally grew up.  It was the school where I showed up, excited to find out that my classmates lived on the same street of the house I’d just moved into a few short blocks away from the school.  It was where I pelted the principal’s car with snowballs during a winter storm... it was also that I got kicked out of after testing positive for HIV.

What made it all hit the spot was realizing that, when I tested positive, no one’s crystal ball could have imagined that I’d be back there, halfway between the boy who ran and played on the jungle gym sets and the wise, bronzed man sitting on the bench.  I may not be officially middle-aged, but I’m sure damn close to it.

And I couldn’t be any more grateful for that.