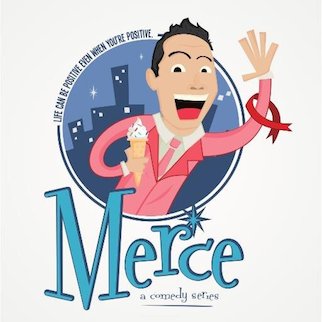 A couple of weeks ago I blogged about Merce- a humorous web series that is centered around an HIV positive character living in NYC. I recently sat down with co-creator, Charles Sanchez... meaning, I sat at my laptop and fired him some questions and he sat at his and answered them. Enjoy!

Donate to the project here!
(anyone who donates $25 or more can get a signed copy of My Pet Virus... I have 5 available, so just leave a Comment on this blog entry to let me know you donated and I’ll make contact to get a mailing address! -SD)

Hey, Shawn! Let me just say how happy I am to have met you and how much I enjoyed your book. I’m totally a fan.
The idea for Merce came kind of as an accident. A few years ago, my photographer friend Dustin approached me about wanting to do some videography work, so he asked me to write something. Being a bit of an over-achiever, I wrote five things. Just silly monologues. We started filming them, and then Dustin went and fell in love, and backed out of the project.

I brought in my pal Tyne Firmin, who’s an amazing director and actor, but had zero filming or editing experience. We shot what ended up being a whole web series, called Manhattan Man-Travels, truly ghetto-style, mostly for the joy of creating. Absolutely no budget. Very Judy and Mickey "Let’s-put-the-show-on-right-here-in-the-barn!" kind of thing.

Merce spoke directly to the camera and we followed him through many crazy romantic situations, from dating and trolling the internet for sex to him being in an actual relationship. We feel like we have something really special in this character, and want to up the production values and see if we can reach a wider audience. We’ve added characters for him to interact with and focused the musical fantasy elements (every episode will have a short musical number). We decided to put Merce’s HIV status more to the forefront, since there’s no character in mainstream American media that’s HIV positive.

And an HIV comedy? Well, that’s crazy, right?  We didn’t set out to, but we lucked into doing something that no one else is doing.

Do you have a favorite HIV positive character from a movie?

Huh. That’s a hard question. There are a lot of movies, plays, musicals that feature HIV characters that have moved me, or that have resonated with me somehow. My first thought is not to a character, but to the song “Will I” from Rent. That song never fails to choke me up, because as strong and healthy as I am, the seriousness of HIV never leaves me. And also, I think it’s a common fear that everyone has about life, “will I lose my dignity? Will someone care?”
But I haven’t answered the question. Buzz from the play and movie of Love! Valour! Compassion! He deals with his status with humor, sometimes acidic humor, but he’s authentic and courageous and funny, and doesn’t let his HIV change who he is.

If you could give any character from a mainstream movie HIV (to make them more interesting) who would it be?


Maybe Bridget Jones. With all her pouty angst and weight issues, and yet those dreamy men still seem to fall for her. What would happen if she also had to worry about whether her panties were still white, because maybe her Kaletra was causing some poops-a-daisy problems?

That would make for some good comedy.
Or someone ridiculous maybe, like Wolverine or Harry Potter. Of course, if Harry Potter had HIV, he could just zap it right out of himself. He’d just take his wand and say, “Heenis-a-penis-a, no HIV-ness-a!” 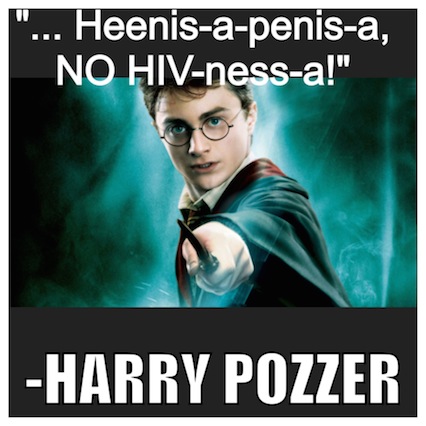 I like that idea!  How is fundraising for Merce going? Deadline? And what’s the plan if you make your goal, and what’s the plan if you don’t?
Oy, this fundraising is crazy. It’s stressful. We’ve raised about 74% of our budget right now... the deadline is midnight July 4th. We’re in good shape, and I’m pretty optimistic that we’ll reach our goal. I think that people are interested in seeing what a comedy about an HIV positive dude could look like, so I’m confident that folks will be willing to give us $10 or $20 or more to help make it happen. Our budget will make sure that the show is colorful and professional looking, will allow us to bring great, talented film artists to our team, from a cinematographer and editor to designers and fantastic actors.

If for some reason we don’t make our entire budget, then Tyne and I will just have to get a little creative. Perhaps we can find some hookers who would donate some time for the cause. Or I may try stalking Yoko Ono. I totally think she’d help us out if she knew about Merce.
Donate to the project here!
(Check the link for other incentives to donate... and don’t forget, anyone who donates $25 or more can get a signed copy of My Pet Virus... (while supplies last!) I have 5 available, so just leave a Comment on this blog entry to let me know you donated and I’ll make contact to get a mailing address! Let’s make Merce happen! -SD)