Looking Back on “Philadelphia” and How It Changed My Life

I remember going to the movies and crying, knowing I had found the key to handling my HIV diagnosis.

I went to the city of Philadelphia once. It was just for a day. It seemed like a nice city.

I went to see the movie Philadelphia once. It was in early 1994. It changed my life.

I was diagnosed with HIV in September of 1993. It was numbing rather than horrific. I was working at the time in the senior ranks of one of Canada’s banking giants. At the time, like lawyer Andrew Beckett who was played in the movie by Tom Hanks, I did not want my employer to know. Like Andrew Beckett I tried to muddle through. Like Andrew Beckett my health became the better of me and I had to somehow exit myself from the workforce. Like Andrew Beckett, I saw injustice all around me — and I became an activist. No longer content with keeping quiet about my illness, I told my friends, neighbours and colleagues that I was HIV positive. It was a giant step for me. 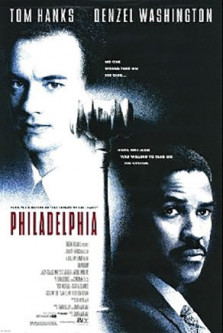 I remember so well seeing the movie in a small Cineplex in Toronto, a bold act at a time when I was scarcely confronting the disease, yet alone wanting to learn more about it. I knew my diagnosis represented a death sentence, yet I was hesitant to know what to do. How the rest of my life would play out seemed entirely unfathomable. Confiding in my banking circle seemed out of the question, but how then to continue to handle a heavy and stressful workload when I knew I was dying? It seemed a problem with no solution — until I saw Philadelphia. Sure I could hardly see the screen through the tears — everyone with a heart cries at Philadelphia. But I left with a plan, a newfound sense of bravery. Andrew Beckett had inspired me like no movie character had done before — or since. I approached my employer and told them I was HIV positive and that my health was in decline. They took it well, and I never went back to my desk again. There were no parting hugs or words of sympathy, it’s true. Importantly though, I had left voluntarily and on my own terms. Disability insurance kicked in and the rest is history.

How did others react to the movie ? I remember at the time it got a bit of a lashing in the queer community. It was the first and arguably the most influential Hollywood AIDS movie ever, but for some it was not gay enough. “According to a Tom Hanks interview for the 1995 documentary The Celluloid Closet” reports Wikipedia, “scenes showing more affection between him and [co-star Antonio] Banderas were cut, including one with him and Banderas in bed together.” No matter; the film went on to much box-office success with Hanks winning best actor at the 1994 Academy Awards. Bruce Springsteen’s haunting title track won best original song. It makes me cry to hear it still. Those lyrics are brutal!

“I was bruised and battered, I couldn’t tell what I felt. I was unrecognizable to myself. Saw my reflection in a window and didn’t know my own face. Oh brother are you gonna leave me wastin’ away. On the streets of Philadelphia.”

Since then, I’ve told why I connected with Philadelphia scores of time during speaking engagements nationwide. When I wrote about it for PositiveLite.com years ago, it became that publication’s most read story for many years, until eclipsed by something more relevant to the modern experience of living with HIV. Back then though, Philadelphia was MY story. In fact it still is.

This December marked the 25th anniversary of the movie. There were screenings in many places and related articles about the short film The Last Mile (see the trailer above and read more about it in POZ here) which contextualizes Philadelphia in the AIDS crisis then and now.

Is there any dispute now that Philadelphia, whether gay enough or not, was a hugely important movie? Some said recently, for instance, “It changed the national conversation about HIV/AIDS.” Others said the movie “managed to do what health leaders had tried and tried to do, yet often fell short: fostering an accurate public awareness about the AIDS epidemic.” Sure, it did all that, but it also changed the course of my life.