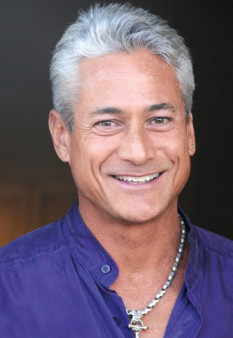 British diver Tom Daley is the official diving hottie of the 2012 London Summer Olympics. Photos of his ripped muscles on full display and videos of the 18-year-old’s impressive athletic accomplishments have officially taken over the Internet--as well as my heart and every other thought. But before Daley ever made a splash on the Olympic scene (or was even born for that matter) Greg Louganis was the resident Gold medal-winning sex symbol on the tips of everyone’s tongues.

Louganis made his Games debut at 16 in the 1976 Montreal Olympics winning the Silver in the 10-meter platform event. Later, he secured two Golds in both the platform and 3-meter springboard at the 1984 Los Angeles Games and repeated this feat in the 1988 Seoul Summer Olympics. In his quest for Gold glory in South Korea, Louganis hit his head on the springboard in the preliminary rounds and suffered a concussion. Louganis had been diagnosed with HIV a few months before the accident but did not publicly disclose his status until 1995 when he released his autobiography, Breaking the Surface. He also came out as a gay man.

Today, Louganis can be seen in the stands of diving competitions, where he’s critiquing and cheering (and possibly even ogling the athletes--I know I would be!). I’m sure people are still ogling him. His Greek god-like body melted hearts 30 years ago, and he can still have that effect when he’s on television today. He’s also just as inspiring when not talking about the Olympics. Case in point: As a General in the POZ Army, Louganis has joined a movement to fast-track the cure for HIV/AIDS.

Recently, Louganis joined CNN’s Piers Morgan at the Olympic Village to discuss diving, HIV and the recent Chick-Fil-A controversy (the eatery’s religious president has publicly stated he is against gay marriage).

Louganis may have hung up his Speedo years ago, but his new role as mentor to the U.S. Diving Team is well deserved--not only for his status as one of the best divers of all time, but also because he is a role model. An added bonus for us all is that he offers great insight into living with HIV.

As Morgan points out, both Louganis and fellow HIV-positive star athlete Magic Johnson look fit and healthy, which has helped change the public’s perception of HIV/AIDS. Greg counters by saying, “It’s a double-edged sword. Kids are seeing us alive and thriving and all that, but I wouldn’t wish my drug regimen on anyone. I mean, the things that I’ve been through are pretty devastating.”

Louganis says he’s able to tolerate and metabolize his antiretroviral treatment so well because he remains active and continues to train. Someone like Magic Johnson has the added benefit of being able to hire people to help him out, such as personal chefs and nutritionists. Everyday folks living with HIV don’t have those perks.

But Louganis doesn’t need a nutritionist to know that Chick-Fil-A should be avoided. When asked about the chicken chain controversy, Louganis refuses to dive into the culture wars and instead says: “Who eats that stuff? I like my arteries, I like my blood flowing!”

Tom Daley may be the man that gets my blood flowing these days, but it’s Greg Louganis’s wisdom and wit that will keep me engaged in the Summer Olympics for years to come.