Okay, don’t get me wrong. Last night’s Prop 8 demo in New York City was inspiring on many levels. The turn-out was huge. The fact that it all happened virally online, starting with a single Facebook event posted only three days earlier by a 26-year-old (great work, Corey Johnson!), amazes me. And what happened last night is part of something huge -- the reawakening of our national gay rights movement. As Rex Wockner said, this is Stonewall 2.0.

But allow an old queen to bitch a little. At the risk of sounding like your grandmother saying “you should have seen how we did it in the old days,” these Facebook demos could use a facelift from the ghosts of ACT UP.

Let’s start with the visuals. Instead of this: 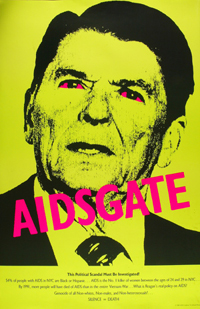 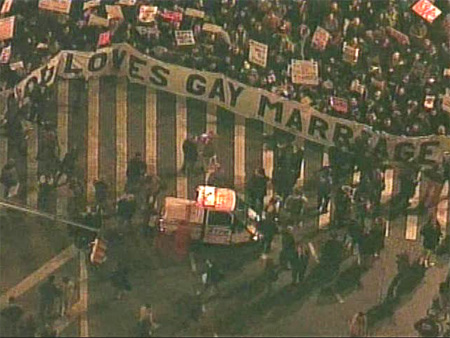 God loves gay marriage? Yuck! Where were our leather-wearing East Village graphic artists when we needed them?

Where were the affinity groups with their creative side-shows like hanging banners from the temple’s rooftop? How about an angry speech or two to get the crowd riled up? A PA system would have worked best, but even someone on a stepladder with a megaphone would have done the trick. Can you imagine if Whoopi had addressed the crowd?

Instead, it was a very happy but low energy event by ACT UP standards. The chants died quickly, probably because half the crowd was busy talking or texting on their cell phones (“where r u? i’m sort of in the middle. where?”).

But I couldn’t argue with the turn-out. It matched ACT UP’s biggest demos. And the diversity of the crowd was wonderful. It was obvious that many of the twenty-somethings (and younger) were demonstrating for the first time. They seemed thrilled by it.

And that’s what matters most.

Sure, there are distinct advantages to in-person planning sessions that Facebook doesn’t afford ? how can folks achieve a strong creative focus on the World Wild Web? But you can’t argue with the speed and numbers of this new organizing method.

So please don’t confuse this old-timer’s ramblings with some sort of negativity. I got to watch our community rise up again. I’ve been waiting for this for twenty years.

The hornets? nest has been stirred. If we can merge some of the old techniques with the new technologies, nothing will stop us.