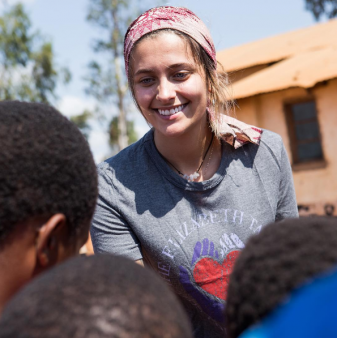 Paris Jackson during a trip to Africa. Courtesy of Instagram/ETAF/Samora Chapman

Elizabeth Taylor’s legacy of fighting the AIDS epidemic lives on through her goddaughter Paris Jackson. Jackson, the daughter of late pop icon Michael Jackson, has announced that she will be an ambassador for the Elizabeth Taylor AIDS Foundation (ETAF).

“Thirty years ago, almost to the day, our then-president Ronald Reagan would not speak about AIDS publicly while the pandemic was wreaking havoc within the gay community; he wouldn’t even say the word...AIDS,” said Jackson at the Global Citizen Live concert and award presentation in New York City on Monday, reports Billboard.

She continued, “Elizabeth Taylor was having none of that. She wasn’t going to let this crisis run wild as it directly impacted her friends and loved ones, those the administration considered discardable. Undaunted, she went to DC and spoke as loud as she could. From the Oval Office to testifying in front of Congress, Elizabeth would not be silenced. Her tireless efforts led to Ronald Reagan finally uttering the word AIDS publicly in 1987.”

Four years later, Taylor founded ETAF to provide grants to organizations, both domestic and abroad, that are helping people living with HIV/AIDS. Today, ETAF remains as dedicated to its cause as it was 26 years ago.

In addition to being inspired by Taylor, Jackson was galvanized by a recent trip to Malawi, which she said, also helped show her the importance of education and advocacy.

“Here we are decades later, living under a president who lost the popular vote and has proven himself to have the compassion and empathy of a dead flashlight battery,” Jackson said. “His budget proposes slashing health care funding for HIV/AIDS worldwide. So now, here I am hearing my godmother’s voice, urging me to be heard and not allow all that’s been accomplished, in finding the cure, to fall by the wayside. But listen...I’ve got real news for him. None of us were discardable in 1987, and none of us are discardable now.”

Following her announcement, Jackson spoke with Billboard further about her choice of activism. She recalled how she didn’t learn much about HIV/AIDS in high school, yet it still affects people worldwide. She explained how important it is for millennials, as future leaders of the world, to be educated, especially concerning health issues.

“We couldn’t be prouder to announce @parisjackson as #ETAF’s newest ambassador,” said ETAF on Instagram. “Reaching young people with HIV education is crucial for breaking down the unique stigma attached to this global health and social justice issue. We are so grateful for her willingness to use her platform and her voice to advance our work. #GenEndIt.”

Although once hesitant to be in the spotlight, the 19-year-old is set to make a difference. She joins a list of growing ETAF celebrity ambassadors, including Colin Farrell, Daniel Franzese and Whoopi Goldberg.

Congratulations, Paris! We look forward to seeing what you do in your new role as ETAF ambassador.

We couldn’t be prouder to announce @parisjackson as #ETAF’s newest Ambassador. Reaching young people with HIV education is crucial for breaking down the unique stigma attached to this global health and social justice issue. We are so grateful for her willingness to use her platform and her voice to help advance our work. #GenEndIt ????: @samora_chapman