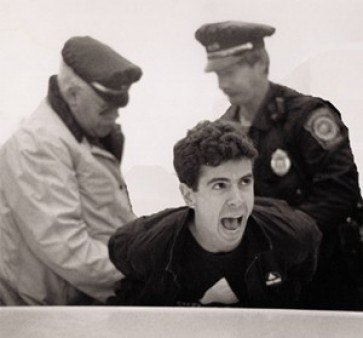 So I guess I didn’t properly introduce myself during my first blog posting. I’m Peter Staley, and I founded AIDSmeds.com a little over eight years ago. Here’s a broad outline of my forty-seven years:

I was born in Sacramento, California in 1961, the third of four kids. Because I have two older brothers, I turned out gay (see the science explaining this here). My dad worked as a plant manager for Procter & Gamble at the time, so we moved around the country a lot until I was eight years old. At that point he was hired to run the PQ Corporation, which was based in Philadelphia at the time, and we moved to Berwyn, PA, on the storied “Main Line” (see Katharine Hepburn in The Philadelphia Story).

I studied classical piano, which, after some bad grades in high school, got me into the Oberlin Conservatory of Music. While piano was my ticket to college, I didn’t think it would be my ticket to life, so I transferred into Oberlin College after one semester and double majored in economics and government.

As I visited London by myself to check out a possible junior year abroad at the London School of Economics, I had my first gay sex (actually, a crash course in gay sex - seven nights, seven men). I turned 20 on that first night.

Just before graduating from Oberlin in 1983, I did a bunch of interviews on Wall Street, and got a job offer from JP Morgan, where my brother Jes was working (and still works, practically running it now). After a brief stint out of the closet at Oberlin, I went deep inside it once again on Wall Street.

While working long hours in Morgan’s commercial bank training program that first year, I let off steam on St. Mark’s Place in the East Village each weekend, starting at the Boy Bar (or a few blocks away at The Bar), and, on occasion, ending up at the St. Mark’s Baths across the street. It was the summer of 1983, and for reasons I might explain someday in another blog entry, I’m pretty sure I was infected that August.

Fast forward to 1985, and read my first blog posting here about how I was diagnosed. I almost immediately disclosed and came out to my family and close friends. With 351 CD4 cells, and Reagan in the White House, my prospects weren’t good. I fought for each month, and each year.

Then I found religion. No, not that kind of religion. I found ACT UP, the AIDS Coalition To Unleash Power. They held their first demonstration on Wall Street, March 24, 1987, and we talked about it on the trading floor at JP Morgan. I never missed a meeting after that.

I became head of its fundraising committee ? bond trader by day, AIDS activist by night - until my CD4 cells dived with the Dow after Black Monday. I went on disability in March of ’88, and got arrested blocking traffic during ACT UP’s first anniversary demo, again on Wall Street. A local TV station shoved a camera in my face. I was on the news that night, with the caption “Peter Staley, AIDS Victim” in big bold letters.

The head of ACT UP’s media committee, Michelangelo Signorile, decided I was good with the art of the sound bite, and before the year was out I was in the hot seat on CNN’s Crossfire arguing with Pat Buchanan about safe-sex. I became an ACT UP media whore (Donahue, Nightline, 60 Minutes, Wall Street Journal, NY Times, Rollingstone, Advocate cover boy, etc.), while racking up ten arrests for civil disobedience.

I proudly organized some memorable ACT UP moments, like shutting down trading on the New York Stock Exchange, and putting a giant condom over Senator Jesse Helms? house.

A bunch of us from ACT UP’s Treatment & Data Committee split off and formed TAG, the Treatment Action Group, in 1992. With giants like Mark Harrington and Gregg Gonsalves, we quickly became an advocacy powerhouse.

In 1997, after ten years of AIDS activism, I decided to take a break. I worked with an amazing career counselor who helped me figure out how to return to the “real world” while fulfilling my dream of becoming an entrepreneur. We accomplished both goals with AIDSmeds.com, which launched in March of 2000.

There’s some other stuff on the resume as well, including a recent bout of activism against crystal meth, but I?ll save those for future blog posts.

I sold AIDSmeds to the guy who owns POZ Magazine a little over two years ago, and I continue to work here part-time. The freelancer I hired from day one to write our amazing lessons, the tireless Tim Horn, is now my boss.

And the future? Who knows. Maybe this blog will help me figure that out.