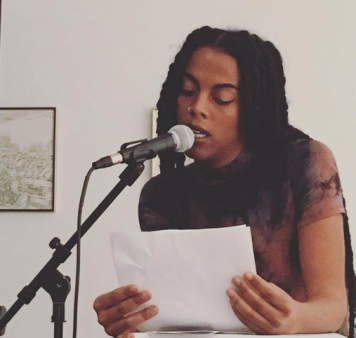 We would like to thank everyone who joined us at SEWER GODDESS: Readings and Inspirations from the Martin Wong Poetry Scrolls on January 13, 2016. The evening’s readers—Charlie Ahearn, Monica De La Torre, Juliana Huxtable, Carlo McCormick and Yasmin Ramirez—brought to life the texture and vitality of Wong’s visual and written language, reading Wong’s own words from his poetry scrolls as well as new writing inspired by Wong and his artwork. The event’s title, SEWER GODDESS, was inspired by the title of one of Wong’s poems and the grit and liveliness that his writings embody.

Martin Wong’s relationship to writing began at a young age and he identified with important literary figures from different generations. Narrating the world of melancholia through his poetry scrolls and self-published books, he built his own language to portray his personal life as a flâneur in California and New York. Wong’s serial process of writing and re-writing created and expanded a linguistic space that he would later introduce into the surface of his paintings and ceramics.

Juliana Huxtable is a New York based artist who attended Bard College. Her work has been exhibited at The New Museum, The Whitney Museum of American Art, The Museum of Modern Art and The Solomon R. Guggenheim Museum.

Carlo McCormick is a critic and curator based in New York City. A close friend and early supporter of Martin Wong, he has written extensively about Martin’s work over the years.

Yasmin Ramirez, Phd is co-curator of Martin Wong: Human Instamatic, a traveling retrospective organized by the Bronx Museum of the Arts. Yasmin has written a number of important essays on Wong’s Loisiada series. Ramirez’s friendship with the artist began in the early 1980s when they were part of the Lower East Side art scene; among her treasured mementos are Wong’s paintbrushes which she keeps on her desk.

Charlie Ahearn is known for his Hip Hop movie classic Wild Style, 1982. In the early 1990’s Ahearn worked with Martin Wong on a short movie shot in his Ridge St apartment and then much later in his parent’s home San Francisco while sick with AIDS. Ahearn considers Martin an amazing artist and friend who defied definition but who creatively memorialized his life in paint.

Mónica de la Torre’s fifth poetry collection, The Happy End/ All Welcome, is forthcoming from Ugly Duckling Presse this fall. She is currently teaching in the writing MFA program at Columbia University and is BOMB Magazine’s senior editor.