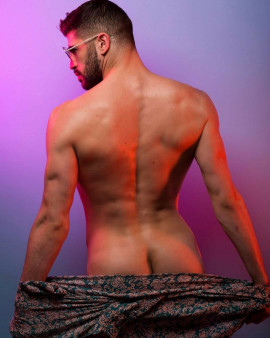 Mr. Man made a decision for me that I initially resented, but it would prove to benefit me more long term.

The morning ocean breeze swept through my hair as the planks squeaked under my paces. The sweat glistened on my body, dripping from my hairline where my forehead and backward cap met. With some hard dance beats in my ears, I felt like I could go for hours.

Each summer morning in 2014, I woke up and ran laps around Cherry Grove, Fire Island. I’d start my day with exercise and shower quickly and head to the beach for a spiritual gathering, and each time I left, I’d feel centered. I never felt centered in my party days, which weren’t far behind me, but I needed to do different things if I wanted different results. There was something about that beach and the people I was starting to spend time with. I had a sense of belonging for the first time in a very long time.

My next stop after the beach was to get a cup of coffee from the grocery store even though I already felt so alive and awake from a wonderful start to my day. I would find things to keep my time occupied before my shifts at Cherry’s where people would go for food, drag shows, and dancing. Then on my next day off, I had plans to go into Manhattan to see Mr. Man, my lust interest at the time.

On my travels back and forth I would listen to Now 46, a compilation of the popular songs that season, and would already have my money spent in my head. I had new underwear picked out that I wanted to buy. I was excited to go spend time with Mr. Man and enjoy our thrills, our laughs, and our conversations.

I spent my first of two days off in New York at my apartment. I needed to go home and feel settled for a moment because I was living on a boat for the summer off on Fire Island, so a bed that didn’t rock was nice, unless I was going for an innuendo there. The second night was planned for a sleepover with Mr. Man. We met when he was done with work, and we went out to Brooklyn. We were undressing each other with our eyes the entire train ride.

Arriving at his place, he forewarned me that his neighbors had mentioned a lot of moaning and noises the last time I had stayed over. We didn’t know how to keep the commotion down, and apparently everyone could hear it. I got pleasure out of knowing how good it was. We sat there on the bed, talking and cuddling, which led to kissing and foreplay. And before long he was inside me, but this time without a condom.

“What’re you doing?” I said, both excited and a little nervous. We had been in this position before; not missionary, but him slipping inside without a rubber on. Undetectable or not, I wasn’t sure if it was safe at the time. We were still for a moment until he looked me square in the eye and replied, “I started taking PrEP.”

Connected without boundaries or barriers, I could feel every part of him in me. It was like I was having a spiritual awakening in the form of sober sex. I didn’t know it could feel this good without substances. I didn’t know I could be so free from my thoughts and also be totally present. I didn’t want this to ever end.

It’s funny, though, how one moment can feel so right and a few days later can feel so wrong. Mr. Man was someone I clung to so early in my sobriety, but he had a bit more awareness of what was happening. I was clinging to a man instead of a solution, so he broke it off with me for my sake. He thought it was inappropriate for someone with years of sobriety to date someone newly sober.

I thought I was so lucky to have a man who was negative and who saw me as me and not for my status. He wanted to get to know me, but he knew I needed to get to know myself... the new me. I resented the situation, but there was nothing I could do to change his mind. He wouldn’t budge.

Trips into the city wouldn’t feel the same on my days off from Cherry’s on Fire Island. I would sit on the top deck of the house boat I was living on, chanting with the gongyo beads to find a sense of rhythm in my life. I had practiced Buddhism a few years earlier when I felt like I had no solution. It helped me feel at peace more than anything had.

I thought he was going to be the one. You know, the one who swept me off my feet and that I’d marry. How could I know that soon? I mean, he seemed perfect to me. I was obsessing and couldn’t get him out of my head.

When my season on Fire Island came to an end on Labor Day weekend 2014, I returned to New York in search of work, hoping that I’d bump into him from time to time, which didn’t really happen. At meetings I would listen to people share their experience, strength, and hope. They spoke of how the guy they met in early sobriety is the guy they were married to now, many years later. That’s all I had the capacity to hear because I related so much, but I heard it and I stayed sober. It gave me hope to think that one day I could end up with Mr. Man.

And by the way, there’s a lot of my story that people think is irrelevant to a larger story of overcoming the challenges of HIV and drugs and partying, but that’s because my story wasn’t their experience. Things haven’t been perfect and jolly since I’ve been sober, but I think it’s important to highlight the ebb and the flow. Sex and dating are always important stories to tell along with medications and prevention. This is my story, so let’s stay positive.